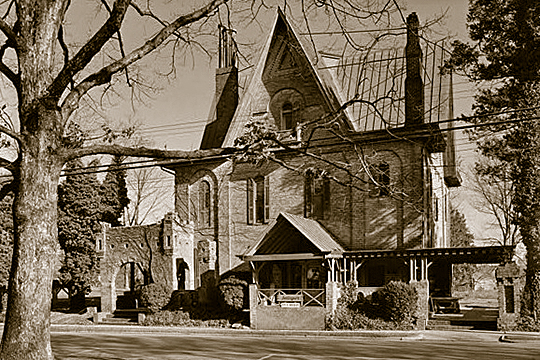 In 1756, Caleb Story received a land grant from the Royal Colony of Carolina. By 1760 the Cherokee Indians and new settlers of the region were at war. During that time Story sold his property to one David Morrow. The story is told, as represented in the Town's seal, that four barrels of rum were considered for the transaction. Around 1771, William Dobson, an Irish emigrant, bought Morrow's property together with an inn and store at the present intersection of Main and Mountain Streets, which he named Dobson's Tavern. Interestingly enough, President George Washington had breakfast there during his Southern Tour on June 2, 1791.

Dobson sold the property to a Gottlieb Schober in 1813, who on November 14, 1817 sold it to Joseph Kerner, a German immigrant who came to this country at 16 years of age to sell watches and clocks. The emerging town soon became known as Kerner's Crossroads.

The first change in land ownership outside of the Kerner family occurred in 1840 and slowly, the area around Kerner's Crossroads began to populate until on March 31st, 1871, the Town of Kernersville was incorporated with a resident population of 147.