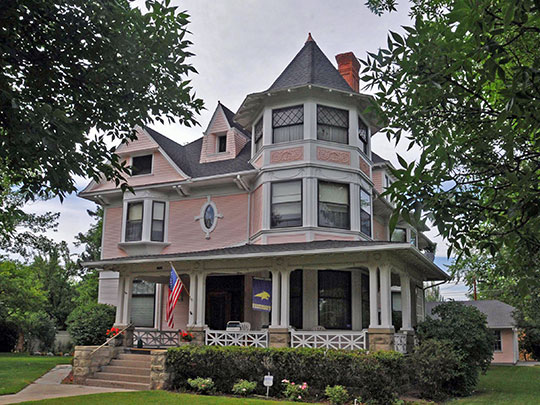 Billings, seat of Yellowstone County and third largest city of Montana, lies on the west bank of the Yellowstone River. On the east beyond the river, and on the north, buff sandstone cliffs known as the Rimrock rise 400 feet above the valley floor. On the south, the high hills flatten down to a plain that slopes westward toward Clark Fork of the Yellowstone. From the streets of the city the valley seems an irregular bowl, rather than the great trough it is in reality, and mountains loom up at its southwestern rim. Though the snow-covered Beartooths are 60 miles away, the clearness of the air sometimes makes the city seem to lie almost at their feet.

Except at the west end of town there are no diagonal streets. The gridiron pattern is laid on a northeast-southwest axis, following the railroad, which cuts the town completely in two. Only a few widely separated crossings connect the halves.

On the north side are the main business section, most of the public buildings, and the better residential districts. Most of the buildings are clean and fresh. Increasing use of electricity and gas protects them from much of the smoke and dust of the average city. At night the business section is neon-lighted in all the colors of the rainbow.

The south side is the older part of Billings. At its southern limit is the sugar refinery, the city's biggest industrial plant. Along the railroad are flour mills, lumberyards, and the warehouses of some of the leading distributing plants in Montana. In between, in a section of vacant lots and old buildings, are isolated groups of attractive houses. In 1938 the Federal Housing Administration allotted $280,000 to replace old houses with new. At the refinery are extensive feeding pens where cattle and sheep are fattened on potent smelling beet pulp, molasses, and alfalfa. In this section of town live many of the Mexicans employed in the sugar industry. Others live in a village of about 50 white adobe buildings on a ten-acre area of alkali flats southeast of the refinery. Often, one small house accommodates two families. A Mexican fiesta is held in mid-September, with English translation of program numbers for visitors. Billings shows its agricultural origin in many ways. The easy friendliness of its citizens is that of a farming community; sometimes fully half the people on the streets have the unmistakable air of the land about them. Cowboys, especially numerous on the days when sales are on at the stockyards, click down the sidewalks in high-heeled boots and broad-brimmed hats.

Descendants of Irish, English, Scottish, and Scandinavian settlers predominate. The foreign-born are but a small part of the population.

It is told that when the town was only two or three months old, one Seth Bullock, approaching over a miserable trail on a dark, rainy night, asked a citizen the distance to Billings. "You're in Billings now," said the citizen. "The devil I am!" said Seth. "Can you tell me where Star, Bullock and Company's store is?" "Keep right on this street," said the citizen. "The store is on the left-hand side, 26 miles from here." This trait of reckless affirmation is more than booster spirit. It not only inspires Billings' claim to be the capital of a vague tributary region called the "Midland Empire," but has promoted its actual growth, in a brief half century, from a tiny frontier trading post and cowtown to the metropolis of an area as large as New York State.

An Indian trail once crossed the site, passing southwest along the river from a gap in the Rimrock. Here Francois Larocque came in September 1805, looking for beaver. Ten months later Capt. William Clark and his party, returning from the Pacific, came down the trail on their way to rejoin Lewis at the mouth of the Yellowstone. Then for years only trappers, traders, and adventurers who left little or no record of themselves visited the region.

From 1853 to 1873 surveys of the valley were delayed by trouble with the Sioux. In June 1876 the news of the Custer Battle drew Nation-wide attention to the region. More troops were sent; the Sioux were subdued; what had been a wild and little-known land was opened to the stockman and land seeker. Soon small settlements were grouped around stage stations and post offices.

When the Northern Pacific Railway entered the valley in 1882, Coulson, founded in 1877 at the eastern edge of the bowl, assumed it would be selected as the site of the city the railroad company ordered built. Refusing, however, to pay the exorbitant prices Coulson landowners asked for their property, the company laid out the new city two miles up the river, and named it Billings in honor of Frederick Billings, its president. Soon Coulson was receiving mail as East Billings.

In a few months Billings became a thriving city with schools, churches, newspapers, and a street railway capitalized at $40,000, though composed of only two 15-foot yellow cars drawn by Indian ponies. The "two-bit" fare to Coulson also paid for two glasses of beer at the Coulson brewery. The trip became the joy-ride de luxe for Billings beaux and their girls. When huge Custer County, whose affairs were administered at Bozeman because it had no county seat of its own, was divided in 1883, Billings became the seat of Yellowstone County.

Then the boom collapsed. Three large fires, two of them fought without adequate water, destroyed many of the makeshift wooden buildings. The disastrous winter of 1886-87 crippled the stock business, and by 1890 the population had shrunk from more than 1,500 to 836. With its first reckless growth dramatically ended, Billings settled down. When prosperity came again, it was based on the solid foundation of a growing cattle industry and agriculture under irrigation.

In 1874 Addison Quivey reported the Yellowstone Valley "valuable for neither agriculture, grazing, nor minerals, but ... interesting ... as the last home and burial place of the horrible monsters of the earliest animal creation." Five years later an irrigation ditch was dug near Coulson and the valley began its magnificent refutation of Quivey's judgment. In 1938 irrigated land around Billings exceeded 600,000 acres.