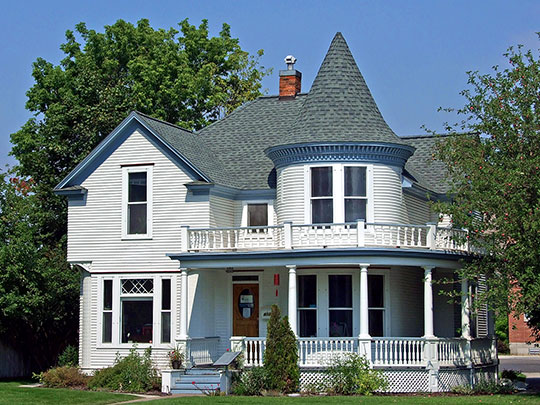 Missoula stands on the level bed of a prehistoric lake, at the mouth of Hell Gate Canyon. The Sapphire Mountains extend southward; the Bitterroots, with Lolo Peak prominent among them, loom on the southwestern horizon. From the high country to the north, icy Rattlesnake Creek rushes down to empty into Clark Fork of the Columbia (locally called the Missoula River} near the city's eastern limits. The narrow entrance to Hell Gate Canyon is guarded by Mount Jumbo on the north, Mount Sentinel on the south. In the northwestern distance rises the symmetrical top of Squaw Peak, glistening white in winter, smoke-blue in summer. Clark Fork, which cuts the city in two, is shallow but swift, its current split by a series of islands. Three bridges unite the north and south parts of Missoula: the old-fashioned iron-and-plank Van Buren Street bridge near the east end of town, the Higgins Avenue bridge at the center, and the modern concrete Parkway bridge near the west end.

The city itself is neat and attractive, and gives an impression of compactness in its business district and in such residential areas as the one west pf the university. South of the river the residential section merges imperceptibly with the environs of the university, where the homes of many faculty members are interspersed with fraternity and sorority houses that are distinguished from other residences only by occasional groups of loitering students. Student life in these houses, while not marked by restraint, has closer ties with the faculty than is generally the case in such institutions. The city has a tendency to straggle away with little apparent plan. One section extends far northeastward between Rattlesnake Creek and Mount Jumbo, and ends as a huddle of summer cabins in a grove of pines. Another, somewhat grimy and smoke-stained, is crowded between the Northern Pacific Railway and the base of Waterworks Hill. On its wide western edge where it meets no natural barrier, the city advances on the river flat seemingly at random.

In general, Missoula is characterized by broad avenues lined with maple and cut leaf birch, handsome residences, well-kept lawns, and gardens of great variety and richness. Because of its comparatively low altitude and its situation on the Pacific slope of the Continental Divide, Missoula has (for Montana) a mild climate and generous rainfall. Cherry and apple trees, fragrant with blossoms or rosy with fruit according to season, adorn nearly every good-sized yard in the residential sections.

Missoula takes its name from the Salish Indian word Im-i-sul-a (by the chilling waters). Some interpretations refer to its site as a place of bad omen, rather than to the temperature of the river, which is essentially that of any mountain stream. But if the name is one of darkness and foreboding it does not describe the city. Missoula' s bright, youthful optimism, heightened by the presence of 2,000 university students, is, on the contrary, perhaps its most definite characteristic.

Long before the white man came, the site of Missoula was familiar to both Salish and Blackfeet Indians. The Salish had to pass through Hell Gate Canyon to reach the plains on their periodic buffalo hunts. At the entrance to the canyon, an ideal spot for ambush, the Blackfeet would attack them. The reputation of the place caused French-Canadian trappers to call it "Porte de l'Enfer," or "Gate of Hell."

Capt. Meriwether Lewis and his party camped briefly at the confluence of Rattlesnake Creek and Clark Fork River on July 4, 1806, then proceeded safely up Hell Gate Canyon. David Thompson visited the site of Missoula in 1812, climbed Mount Jumbo, and from there mapped the surrounding country, But the first settlers in the region, the Jesuits who founded St. Mary's Mission, 30 miles to the south, met with Indian troubles that forced them to abandon the mission for a time.

Gov. Isaac I. Stevens led his railroad survey party into the region in the fall of 1853. With him was Captain C. P. Higgins, one of the founders of Missoula. In 1855 Stevens met the Flathead, Pend d'Oreille, and Kootenai Indians in council at a cottonwood grove nine miles west of Missoula, and concluded a reservation treaty with them.

By that time there was considerable traffic through Hell Gate Canyon, and the valley became a stopping place for pack trains. In 1860 Frank L. Worden and Captain Higgins built a log trading post four miles west of the present town-site, and called it "Hell Gate Ronde"; other cabins were built around it. In the winter of 1860 6 1 William Hamilton erected a small log cabin at the mouth of Rattlesnake Creek, the first building on the site of present-day Missoula. The legislature of Washington Territory established Missoula County, including in it a large part of what later became western Montana, and Hell Gate became its seat. Montana's first county election was held there in 1861.

Next year the Mullan military road approached Hell Gate, the crews working throughout the winter to complete the grades through the canyon. In the summer of 1863 hundreds followed this road from Idaho to the gold mines at Alder Gulch.

In 1865 Worden and Higgins built a sawmill and a flour mill at almost the exact present-day center of the city, and started a new store near the mills. The handful of settlers at Hell Gate Ronde moved to the new site, which was at first known as Missoula Mills.

Up to 1872 the district was served by five toll roads from Deer Lodge. The toll was 50 cents for horse and rider, $1 for a team, and 25 cents a head for cattle. That year the county bought the roads, and there was a great celebration. The following April several Sisters of the Charity of Providence opened a hospital and school in a small frame building near the site of St. Patrick's Hospital. The small chapel in the building was Missoula's first place of worship.

When the Nez Perce Indians, under Chief Joseph, went on the warpath in 1877, the people of Missoula became alarmed and asked for troops. They were not molested, but the incident led to the establishment of Fort Missoula, two and one-half miles southwest of the city.

Missoula's principal growth dates from the arrival of the Northern Pacific Railway in 1883, when it became a division point with repair shops. On March 12, 1885, it was incorporated as a city. Growth was further stimulated by the building of the Chicago, Milwaukee, St. Paul and Pacific (1908).

The State university, established in 1895, was greatly influenced the economic and cultural life of the city. The accommodation of students amounts to an industry that helps tide the community over lean years; culturally, its most immediate effect has been to make higher education available to a far greater share of the young men and women of Missoula than of other communities in the State.

Missoula experienced a slow but steady growth during the first third of the twentieth century. The State university began to take a larger place in community life, the regional office of the U. S. Forest Service was installed at Missoula in 1908, there was a steady increase of civic groups common to most cities, and the city planning board was organized in 1934. Even so, Missoula emerged but slowly from its status as a frontier town. As late as the early thirties, Indians still camped on the flats around the city to dig camas roots. In 1936 and 1937 Missoula grew rapidly, and estimates of population ranged from 18,000 to 25,000 at the end of the latter year. The largest single factor in this growth was perhaps the westward movement of thousands of people from the eastern drought areas.