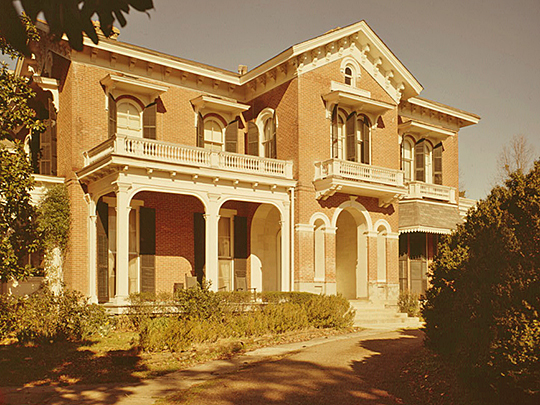 Oxford is the seat of Lafayette County, Mississippi, and the home of the University of Mississippi. The northern Mississippi community is located approximately 160 miles north of the capital city of Jackson and thirty miles south of Holly Springs. Comprising the commercially developed center of town, the Oxford Courthouse Square Historic District is situated on a plateau which slopes down to the southwest and southeast. The visual focus, structural massing, and traffic flow within the district is centered around the courthouse square.

Oxford was incorporated in 1837, in which year the square was laid out and a temporary frame courthouse was constructed at its center. Replaced by a more-substantial masonry structure in 1840, the courthouse was again rebuilt in 1871, following its incineration by Union troops in 1864 under Gen. A. J. Smith.

Nobel Prize-winning author William Faulkner (1897-1962), who lived in Oxford at Rowan Oak during most of his life, frequented the square. An alley between number 18 and 19 Courthouse Square was named in his honor.

Oxford, on a small wooded plateau overlooking snug valleys of the Central Hills, retains the persuasive charm and culture of the Old South. Its character, like the essence of its appeal, is compounded of intangibles as elusive as the scent of its jasmines and as delicate as the humor of its town clock, the four faces of which seldom agree. It has been the county seat of Lafayette and the site of the State university for nearly a century, and it is these two factors, education and law, that give to it its tone today. The white stuccoed courthouse, with its green roof and clock cupola, centers the town. About the small grass-free courtyard, shaded on the west by heaven trees, is a low iron fence—handy for farmers to hitch their horses after having watered them at the nearby trough. Facing the courthouse on four sides are the low red brick and stucco commercial buildings that form the business district which Oxford's leisured trade has not outgrown. Leading from the square, shaded residential streets climb a slight ridge or two before changing into highways or country lanes. Cloistered behind the cedar, magnolia, and oak trees along these streets are the homes that make Oxford today seem as it has always been, a town dedicated to the cultural and social life revolving around the university.

Tradition is important; the current of Oxford's life is not swift but deep. The people are not prosperous as in the days "before the war," but they are comfortably sustained by the university and by the farmers who come in on Saturdays to do business on the square. It is the headquarters of the Northern District of the United States Court, and the headquarters of the northern division of the State highways department. As yet no industry has intruded upon its serenity, nor has the town felt the pain of expanding beyond original boundaries. In 1928 it received a silver cup for being the cleanest and best kept town in the State.

In 1835 John Chisolm, John J. Craig and John D. Martin made their way into the territory ceded by the Chickasaw Indians and, stopping in the section now comprising Lafayette County, set up business in a log store they built near what is now Oxford's town square. Close on their heels came Robert Shegog and Thomas D. Isom, the latter obtaining a position as clerk in the store built by the former. The influx of settlers was rapid; stimulated by the enthusiastic descriptions of early traders, there swarmed into the "... fairy land (of) park-like forests and waving native grasses..." adventurers, speculators and would-be landowners. On June 12, 1836, Chisolm, Craig, and Martin, bought from Ho-kah, a Chickasaw Indian woman. Ho-kah affixed her signature to the deed by making a cross mark, and to make the deed legal beyond doubt two other citizens certified "... that the above named Ho-kah is able to take care of her own affairs." After securing the land, the three traders donated 50 acres to the board of police to establish a county seat. The following year the village was laid out and incorporated, the first city minutes bearing a date of May 11, 1837. Isom, voicing the hope that such a promising spot would catch the plum of the State university then under consideration, suggested the name Oxford. In 1838 the inhabitants numbered 400. There were no churches by arrangements had been made for two; there were two hotels, six stores, and two seminaries of education. Beasconn, a contemporary writer, described it as one of the most pleasant towns in the whole region.

The hope of Oxford's citizens was fulfilled when the State university opened in 1848. Eight years earlier the Mississippi Legislature had passed an act providing for the State university and, with a commission appointed to select the site, Oxford had been chosen by a margin of one vote. The institution under the administration of Dr. Augustus B. Longstreet, elected president after the first session, drew some of the South's most brilliant minds to Oxford, and until the outbreak of the War between the States, a society of culture and gaiety flourished. An opera house was built, bringing many famous entertainers to the town. Young men held tilting tournaments that resembled in their color and pageantry the jousts of Scott's romances. Sober-minded scholars divided their attention between their books and addresses to the crowds gathered on the courthouse square.