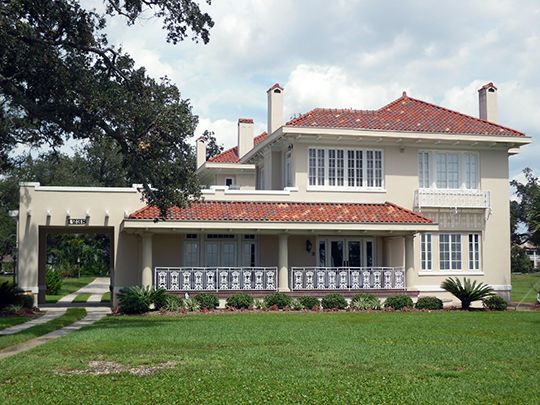 The beginning of Gulfport can be dated exactly at May 3, 1887. On that day a committee of the Board of Directors of the Gulf & Ship Island Company, an organization formed for the purpose of building a railroad as an outlet for the Piney Woods, and headed by Judge W. H. Hardy, accepted a civil engineer's report as to the best location for the contemplated railroad's terminal harbor on the Mississippi Coast. By 1891 the railroad was completed to Saucier, 20 miles north. Then the Union Investment Company, which held the building contract, fell into legal difficulties and Federal court proceedings brought construction to a standstill.

Immediately after this, however, Captain J. T. Jones of New York saw the potentialities in the railroad and undertook its completion. By 1902 the entire stock of the Gulf & Ship Island R.R. had passed into his hands and within a few months the town of Gulfport became a city of 5,000 population. But the achievement found its obstacles. Yellow fever was an acute problem. Each summer brought a few cases of the plague to the Coast and with these the dreaded quarantine law. Immediately upon the development of a case all withdrawal from the city was banned; railroads were required to transfer incoming passengers, and freight and mail were fumigated before being allowed to proceed. These restrictions served to isolate Gulfport, along with other Coast towns, from the outside world during certain seasons of the year and, consequently, to check its growth. At this time all incoming vessels were inspected at the Government quarantine on Ship Island. By 1902, however, the cause of yellow fever was at last determined and the disease brought under control. In that year the personnel of the station was withdrawn from Ship Island and the inspection service established at Gulfport, the seat of Harrison, second county in the United States to have a Board of Health.

The original plan of the Gulf & Ship Island R.R. was to extend the tracks across the 1/2-mile channel to Ship Island. This plan proved impracticable, and instead of carrying it out, improvements were made on the Gulfport harbor, which was opened in 1902. With its completion, the road, built through a sparsely settled section as an outlet for lumber shipments, brought a transformation to the southern part of the State. In 1911 Gulfport shipped more yellow pine than any other port in the world.

Into this ready-made city, in the pre-war boom, poured a population from many countries. A dozen languages could be heard in a morning's stroll, and court proceedings were carried on largely through interpreters. These folk were mostly seamen lured from their ships by high wages. When the lumber shipments decreased and wages became less attractive, they returned to the sea. But their comparatively short stay put a cosmopolitan mark upon the character of the town. There was no tradition by which to gauge values, and during this period Gulfport's social and political history is a story of churches and schools fighting against saloons and lawlessness. But due to a few events the unprovoked killing of a Greek on a prominent corner, a mass Christmas night attack upon the small police force public sentiment crystallized against the wide-open character of the town.

Shipping and lumbering brought stevedore companies and subsidiary industries, such as foundries, machine shops, ship chandlers, and building trades, to the city. But in 1906 a terrific tropical storm swept the Piney Woods and brought the shocking realization that, figuratively, the city had all its eggs in one basket. Approximately a fourth of the standing timber in south Mississippi was blown down, and by the financial repercussion every bank in Gulfport was tossed to the verge of insolvency. Recovering from the catastrophe, a move was made to develop truck gardening and to interest tourist trade.

The need for other props to the city's commercial life was made compelling by the exigencies of the World War. With lumber shipments practically at a standstill in the early years of the war, Gulfport businessmen cast about for new sources of income. The result was the sponsoring of the Mississippi Centennial Exposition in 1917, partly to celebrate the 100th anniversary of the State's admission to the Union, but more to establish the Gulf Coast as a permanent exposition site for Mississippi products and industries, with a view of developing eventually the millions of acres of idle land in the State. Before the exposition could be held, the United States entered the World War, and the buildings and grounds were taken over by the Federal Government for use as a naval training school.

In 1925 the Illinois Central System purchased the Gulf & Ship Island R.R., launching a real estate boom that continued through that year and much of 1926. With the collapse of the boom, Gulfport faced a crucial situation. The timber of the Piney Woods had been cut and never again would there be lumber shipments from Gulfport like those of the earlier period. But the years had brought a civic consciousness that united the citizens in a community drive to keep the city alive. Cotton, the State's oldest and largest industry, was sought as a new means for industrial growth; warehouses, compresses, and a yarn spinning mill now converted into a shirt factory were built. The climax to this development was the completion of a million-dollar pier and warehouse that gave the city shipping facilities unexcelled by any port on the Gulf.