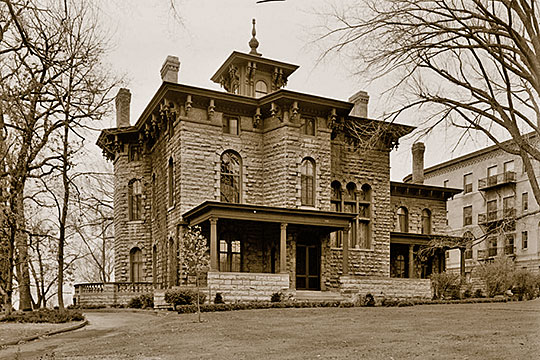 An American Victorian rendering of an Italian villa, the house was designed by Otis E. Wheelock of Chicago. The style, which became popular in this country during the 1840s and 1850s, is sometimes called American Bracketed because of the ornamentation at the cornice. The house was built between 1862 and 1865 by James C. Burbank, a Vermont-born pioneer who came to Minnesota in 1850. Burbank was a significant figure in early Minnesota transportation, controlling a large part of stage-coach and riverboat traffic in the 1860s. Burbank died in 1876, leaving the house to his widow, who resided in the house until 1884.

Crawford Livingston acquired the property in 1887 and Livingstons have lived there since. Crawford Livingston came to St. Paul in 1870 and gained wealth as a banker, stock broker, and railroad builder. He and his wife, Mary Potts, a niece of Henry H. Sibley, lived at 432 Summit Avenue until their deaths in 1925, when the house passed to one of their five children, Mary Livingston Griggs.

Theodore Griggs was the descendant of a Civil War colonel and a prominent entrepeneur. In the late 1920s, Mary Livingston Griggs undertook extensive alterations to the house—the first major changes since construction. Mrs. Griggs added a new wing, designed by a St. Paul architect, A. H. Stem, who also remodelled the stone room. The new wing included kitchen facilities on the first floor and a bedroom above. In the early 1930s the project for installation of European period rooms was carried out by architect Edwin Lundie of St. Paul.

With Mrs. Griggs' death in 1967 the property passed to her daughter, Mrs. Jackson Burke, who has donated the property to the people of Minnesota in care of the Minnesota Historical Society and the St. Paul Junior League.