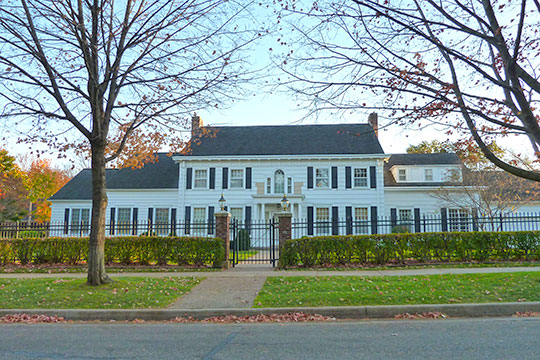 The Pill Hill Residential Historic District was listed on the National Register of Historic Places in 1990. Portions of the content of this web page were adapted from a copy of the original nomination document. [‡]

The section of Rochester known as Pill Hill has long been considered one of the city's most distinguished residential neighborhoods. It is noted for the quantity of architecturally significant houses, and also for its historic association with the large numbers of medical professionals affiliated with the nearby Mayo Clinic who have traditionally made Pill Hill their home. Pill Hill takes its name from the elevated terrain which rises to a height of over 1,120 feet, some 100 feet above the surrounding landscape. The hill drops gradually to the east and west, while the north and south edges plunge much more abruptly. Despite the local topography streets are laid out on a rectilinear grid. Many property lots, however, are unconventional in size, and the difficulty of placing residences onto these irregular, hilly parcels has resulted in a variety of site lines and setback plans that architects and builders often used to their advantage. Because Pill Hill was not part of a development plan organized by either the city of Rochester or the Mayo Clinic, construction was sporadic and houses were randomly built throughout the neighborhood during a 30-year period.

Construction started shortly after the turn of the century and was essentially completed by the late 1930s, thus the period of significance is from 1903-1937. Stylistically the neighborhood displays a range of past motifs and designs popularized by the Period Revival styles. The buildings include many of the residential styles popular during the period of significance, with Colonial Revival and Tudor Revival predominating, and Prairie School, Craftsman, Spanish Colonial Revival, and Bungalow styles also represented. Over 90% of residences in the district are either two- or two-and-one-half-stories in height. A majority are of wood frame construction sheathed with clapboards or stucco, and many others have a veneer of brick. Decorative elements tend to be simple, a tendency appropriate to the simple massing and design of regional interpretations of the styles discussed above.

In 1854 the original townsite of Rochester was surveyed near the center of Olmsted County in the valley of the south branch of the Zumbro River, which enters the city from the southwest. By the time Minnesota achieved statehood in 1858 the city had been named the county seat, and 1,500 people had settled in the busy agricultural trading center.

Dr. William W. Mayo came to Rochester in 1863 to examine Union army recruits, and the next year he moved there with his family. His sons William J. Mayo (1861-1939) and Charles H. Mayo (1865-1939) learned medicine in an apprenticeship with their father that began in 1869. The older "Will" Mayo earned a medical degree from the University of Michigan in 1883, and "Charlie" Mayo graduated from the Chicago Medical College in 1888. An 1885 tornado in Rochester united the Mayos with the Sisters of St. Francis who ran a convent and school in Rochester. In 1889 St. Mary's Hospital opened with the three Mayos on its staff; it expanded with additions in 1897, 1904, and 1912. By 1914 the first complete and independent medical facility built for private group practice in the United States had been finished.

Immediately southeast of St. Mary's Hospital is Rochester's highest hill, an area that was originally pasture and farmland. Historically this elevated ground was known as "College Hill" in reference to the territorial legislature's decision to locate a college in southwest Rochester. When the plan for a school was discontinued, the area was platted as part of Head & McMahon's Addition. While early residential growth in Rochester was concentrated around the city's commercial core, it was not until after 1900 that houses were erected near St. Mary's, located about ten blocks west of the central business district. During the nine-year period between 1903-1911 ten dwellings were constructed in the district, the earliest of which were loosely clustered on the north end of the hill above the hospital. Seven of these houses were originally owned or occupied by physicians or employees of St. Mary's, suggesting an apparent bond between the hospital and the area of the hill. Among the earliest Pill Hill residents associated with St. Mary's Hospital (and later the Mayo Clinic), were the bacteriologist Dr. Arthur Sanford and the Clinic accountant Presburry Moore, both of whom built houses in the 800 block of Fourth St. SW in 1903. Perhaps unwittingly, these and other Clinic doctors were establishing a pattern by medical professionals of locating their dwellings together on an attractive tract of previously undeveloped land. The hill's proximity to St. Mary's was ideal for residents affiliated with the hospital, and the elevated site provided a visually appealing setting for construction.

In 1906 the Mayo family donated to the city five-and-one-half acres of land in the northwest corner of the hill for use as a public park. The exceptional view from St. Mary's Hill Park coupled with its spaciousness and shade trees provided another amenity for neighborhood residents.

There were other reasons residents may have chosen to build on Pill Hill. After 1906 Dr. Herbert Giffin began to organize weekly staff meetings to review medical cases. These were held on Wednesday nights, initially at the first homes of Will and Charlie Mayo (in the 400 block of Fourth Street SW, both demolished), and later in Charlie's second house at 701 Fourth Street SW. Mayo Clinic physicians attending these meetings undoubtedly realized the practical benefits of living in the area—it offered easy access to work, evening staff gatherings, and social activities with other Clinic employees residing nearby. Although professionals associated with Rochester's medical community were not obligated to live in Pill Hill, the neighborhood certainly provided attractive incentives for those planning to build in the city.

The erection of the Mayo Clinic between 1912-1914 ushered in a significant phase of municipal growth in Rochester, and particularly residential development on Pill Hill. From the time construction began on the Clinic until 1930, 67 houses were built within the district, a majority of them for doctors and staff associated with the Mayo Clinic. One building contractor estimated that nearly 200 residences were constructed in the city in 1915. The average cost was about $4,000, considerably less than many Pill Hill dwellings. For example, Dr. M.C. Piper's 1927 Tudor Revival residence at 433 Ninth Avenue SW cost about $21,000; the Dr. A. Logan House at 503 Ninth Avenue SW was built in 1915 for $8,500, and the Dr. W. Braasch House at 815 Third Street SW was constructed in 1916 at a cost of $16,000.

During the third decade of the 20th century another 46 residences appeared in the district, with most of them owned or occupied by medical professionals employed by the rapidly expanding medical facility. Nearly two-thirds of the houses in Pill Hill were, at various times, owned by physicians, surgeons, and administrators affiliated with the Clinic. The most prominent residents were Dr. William J. Mayo, co-founder of the Clinic, and Dr. Edward C. Kendall, who received the Nobel Prize in 1950 for the discovery of cortisone (627 Eighth Ave. SW). The district thus reflects a broad pattern of community development because it evolved historically into a neighborhood populated by Clinic-affiliated residents.

At least three architects and/or builders were important to the development of the Pill Hill historic district. Harold H. Crawford was a Rochester architect who reportedly designed 80-100 houses in the city during the first third of the century. Born in Luverne, Minnesota, Crawford received degrees from the University of Illinois and the Harvard School of Design. After World War I he returned to Rochester where one of his first commissions was planning a parish hall for Calvary Episcopal Church. Crawford's residential designs relied heavily on revival styles that utilized combinations of brick, stone, stucco, and false half timbering. There are sixteen known examples of Crawford's work in the district, many of which date from the late 1920s and display his craftsmanship and attention to detail. Notable designs include his own house at 514 Eighth Avenue SW (1926); an elaborate Tudor Revival residence and detached garage at 810 Eighth Street SW (ca.1926); 433 Ninth Avenue SW (ca.1927); and a Georgian Revival dwelling at 436 Tenth Avenue SW (1926). In addition to residential architecture, Crawford designed several public buildings including the Rochester Public Library, Rochester Post Office, a number of schools, and four buildings at the Faribault State Hospital.

Other Minnesota architects influenced the character of the neighborhood. The prominent architectural firm of Ellerbe & Associates designed three houses in the district, the most distinctive of which is the Mayo House at 701 Fourth Street SW (1918). George J. Hoffman and Frederick Mosse opened an office in Rochester in 1914 and drew plans for 506 Tenth Avenue SW the same year; and Edwin Lundie designed 706 Fourth Street SW in 1922.

Many other residences in the district were local interpretations of popular styles executed by Rochester builders such as Garfield Schwartz. Although the majority of his work involved the construction of large public and private buildings including nearly all of the Mayo Clinic structures, Schwartz is credited with the erection of at least nine houses in the Pill Hill neighborhood. During his 38-year career Schwartz had contracts in the Dakotas, Iowa, Illinois, Michigan, and Washington.

These architects and builders designed and constructed an architectural fabric that was traditional, restrained, and generally harmonious. It remains substantially intact and thus conveys a sense of architectural cohesiveness through its design, setting, and materials. Every house type in the description is represented throughout the neighborhood. The large Tudor Revival design is especially well represented by three houses in a row at 801, 831, and 841 Ninth Avenue SW. Each building is located on a substantial, terraced lot filled with mature deciduous and coniferous trees. These and other Tudor houses are identified by their steeply pitched cross gabled roofs; decorative stucco, brick, and half-timbering; tall, narrow multi-pane windows; and massive chimneys crowned by decorative chimney pots. An extremely high concentration of both Tudor and Colonial Revival houses are found along the 800 and 900 blocks of Eighth Street SW, as well as on the 600, 700, and 800 blocks of Ninth Avenue SW. Nearly all of the Colonial Revival dwellings are characterized by symmetrically balanced facades, accentuated front doors, multi-pane double hung windows, and gable roofs. The Spanish Colonial Revival design is demonstrated by four residences at 932 Fourth Street SW, 1104 Seventh Street SW, 803 Eighth Street SW, and 607 Ninth Avenue SW. Two of these were designed by Harold Crawford and all of them are distinguished by low-pitched red tile roofs, stucco walls, and arched wall openings.

As portrayed in the physical description, Pill Hill has not suffered from an influx of new construction. Some infill houses were erected in the 1950s and 1960s, but they do not significantly detract from the residential ambience of the neighborhood. The overall scale and feeling of the housing stock, in concert with the attractive physical setting of the hill, continue to reflect the architectural and social tastes and values of the medical/professional community.