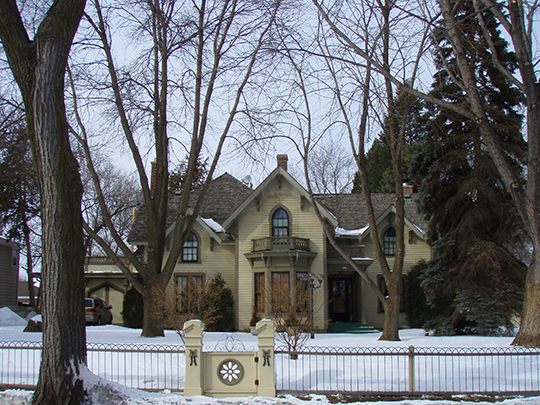 Morningside seceded from Edina in 1920 and was incorporated as an independent village. In 1966 it was re-annexed to the city. Though the neighborhood is part of Edina, part of its distinction is the independent nature of this area that has roughly 750 homes. The Morningside neighborhood was platted for residential development in 1905 by the children of Jonathan Grimes, who inherited the Grimes farm and orchard in the Northeast corner of the village. Grimes Avenue bisects the neighborhood in a North-South orientation. [1]

The rapid development of electrified street railway transportation in the early decades of the twentieth century caused the older Twin Cities metropolitan core to expand, star like, into the surrounding countryside. [See: Streetcar Suburbs, 1888 to 1928] The streetcar broke down the relative isolation of Edina's rural neighborhoods and enabled country folk to participate in the social, economic and cultural life of the city. More importantly, the trolleys also took city dwellers to the countryside to visit and later to purchase homes. Along the streetcar line between Minneapolis and Lake Minnetonka, farmland was subdivided and converted to suburban residential use in the Morningside neighborhood after 1905. [2]