Photo: The Brinkerhoff-Becker House, also known as the Becker-Stachlewitz House, was built as a private home in 1863-69. Charles J. Becker purchased the house in 1889, and remodeled it in 1891 to include the prominent helmet-domed tower. It has been remodeled into apartments, and is currently owned by Eastern Michigan University. Listed on the National Register of Historic Places in 1982. Photographed by User: Andrew Jameson (own work), 2010, [cc-by-3.0 (creativecommons.org/licenses/by/3.0)], via Wikimedia Commons, accessed January, 2013. 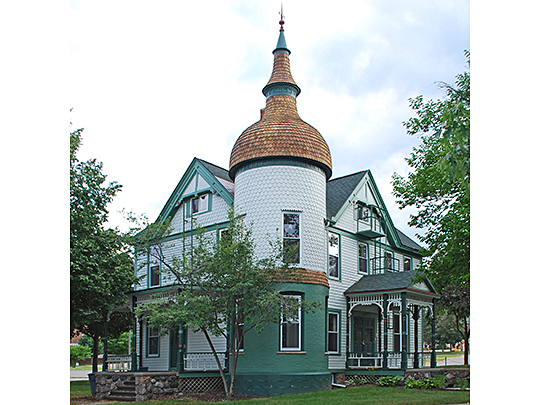 Ypsilanti's history extends back to the early decades of the 19th century, with the establishment of territory land for public sale in the 1820s. Benjamin Woodruff founded Woodruff's Grove, the nucleus of what became the Village (1832) and then the City of Ypsilanti (1859), the second city in the state to incorporate.

Significant contributing factors leading to Ypsilanti's physical development include the surveying and "improvement" of the old Sauk Trail (an early Indian route connecting the sites of Detroit and Chicago) in the late 1820s, construction of the Detroit and Saint Joseph Railroad in 1838, and establishment of the Interurban Railway System in the latter part of the 19th century. Thus, was Ypsilanti lined early on with outlying communities and other developing areas. This linkage today includes the interstate highway system and international air travel.

Other significant events in Ypsilanti's history include the establishment of the Michigan State Normal school in 1949 and the Willow Run Bomber Plant in the early 1940s. The Normal School was the first teacher training school west of the Allegheny Mountains and continues in operation today as Eastern Michigan University (EMU). The bomber plant was erected specifically to address World War II efforts, producing ever-changing, continually improved, long-range bombers. Employment demands were great (three shifts, 24 hours a day) luring thousands of families to Ypsilanti and the Ypsilanti area and causing a severe housing shortage. The need for additional housing resulted in the construction of Willow Village, an agglomeration of quickly constructed, attached dwellings in Ypsilanti Township, northeast of the City. This housing was considered "temporary," but was used well beyond even the most liberal interpretation of that term. The desperate need for living quarters during this period also prompted the owners of many of the beautiful, large older homes in the City to divide them up into rental units. More often than not this was done without benefit of a building permit or inspections; indeed much of the work was done by the homeowners themselves. The rapid growth of the City during World War II has left the City of Ypsilanti with a variety of housing types and densities. The growth also created vibrant and economically viable commercial and industrial centers providing important jobs and tax base to the City.