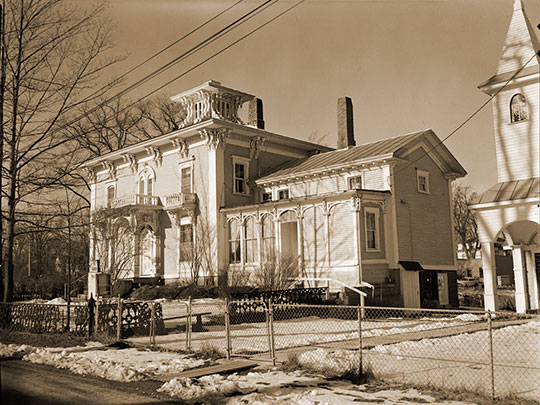 The written history of Richmond begins in 1649 with the purchase of a tract of land from the Indians by Christopher Lawson. This tract encompassed the present towns of Richmond and Gardiner. In 1719, Fort Richmond was constructed to facilitate trade to the interior and to offer some protection to the few settlers who had come to this wilderness. This fortification was abandoned and dismantled in 1754 when the Forts Shirley, Western and Halifax were built further up the Kennebec River.

Richmond's waterfront, now used mainly for recreation, was once the focus of its commercial and industrial life and the source of the wealth that built many of the town's 19th Century homes. From a modest start in 1815 with the construction of a schooner, shipbuilding in Richmond blossomed during the 19th Century. In his book, Richmond on the Kennebec, John Fleming notes that the roughly 75-year span that marked the town's shipbuilding era was its "greatest single period of general prosperity."

Next to Bath, according to Merchant Sail, a six-volume history of the shipbuilding industry, Richmond was "the most important shipbuilding community in the greater Bath area during the period 1824-1885." Now removed or buried in rocks and mud, the ways and stocks that lined the Kennebec River at Richmond were the cradles of nearly 250 wooden vessels, including ships, barques, brigs and schooners. Numbered among these vessels were a handful of Richmond-built clipper ships, a special class of sailing vessel designed purely for speed. Analogous to today's FedEx, clipper ships were just the ticket for low-bulk, high-value commodities such as opium or tea from China or for a fast trip to the California or Australian gold fields.

Similar to today's software industry, clipper ships were relatively high-tech and represented a significant departure from traditional marine architecture. The primary defining characteristics of clipper ships were their sharp hull design and daring, almost reckless use of spars and canvas. Cargo-carrying capacity was traded for speed. Even the naming of these vessels was different: Prior to the arrival of the clipper ship, vessels often bore the name of the wife or a daughter of the owner or perhaps a family name. In another break with the past, clipper ships carried names like Flying Cloud, Sovereign of the Seas, and Great Republic. Richmond's contributions included Pride of America, Wild Wave, Gauntlet and Wizard King.

The latter two, Gauntlet and Wizard King, were constructed in the shipyard of T.J. Southard, one of Richmond's most famous citizens. The largest in Richmond, Southard's shipyard launched between 75 and 100 wooden vessels of all types over its 44-year existence, including some of the largest built in Maine. Wild Wave was built by George H. Ferrin, whose youthfulness at the time—only 32 years old—was also characteristic of this new technology. Though captained and owned by folks "from away," Wild Wave played the opening role in an epic worthy of Robinson Crusoe, ending its days on a coral reef among the Pitcairn Islands. When T.J. Southard saw shipbuilding begin to slacken off, he built mills and commercial buildings, which along with his house are part of the Historic District.

The last ship built in Richmond was the schooner Phoebe Crosby built in 1920. Richmond was second only to Bath in shipbuilding in the Sagadahoc/Kennebec River area.

Due to clever promotion, the Kennebec ice became known as the best ice, higher in purity and health benefits, and people were willing to pay more for Kennebec ice. Farmers and their horse teams were hired by large Boston or New York firms to supply ice to the metropolitan areas south of Maine. Ice houses dotted the banks of the Kennebec River in Richmond and Dresden. Ice was cut and shipped south, even as far as Central America. Seasonal workers, such as farmers, depended on this thriving industry. Ice was considered a luxury item until after the Civil War. However, when Americans added more fresh foods and dairy into their diets, more homes had ice boxes and the ice market rapidly expanded. With modern refrigeration, the ice industry on the Kennebec came to an end.

Also of note, Richmond was once the center of the largest Slavic-speaking settlement in the United States. People of Ukrainian, Russian, and Polish heritage immigrated to the United States during World War II to settle along the Kennebec Valley. In the 1950s and 1960s, there was also a large influx of White Russian emigres, who earlier fled the Bolshevik Revolution of 1917 and eventually came to Richmond both from Europe and from major US cities like New York. Many of these settlers were retirees, and their families often chose not to remain there. For this reason, the Richmond White Russian community has now largely disappeared. One of the churches that they built, however, the Russian Orthodox Church of St. Alexander Nevsky, continues to function to this day.