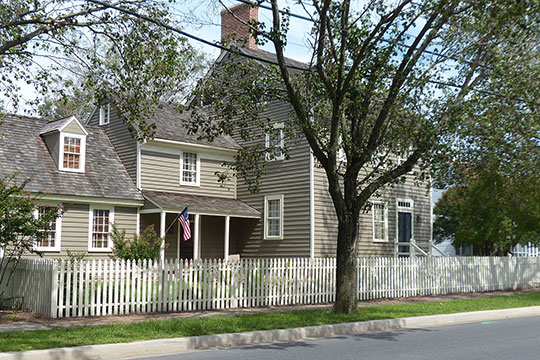 Located on the south side of the Pocomoke River, the site of Snow Hill was once used as a landing place by Indians; when the earliest white settlers in the vicinity arrived in 1642, they named the area "Snow Hill" after the suburb of London from which they had come. In 1676 the land on which the present town stands was included in a tract of the same name that was patented by Colonel William Stevens, a prominent planter in what was then Somerset County. He amassed a fortune by combining agriculture and merchandising with land speculation. He sold the tract called "Snow Hill" to Henry Bishop in 1678 for the sum of 15,000 pounds of tobacco.

In 1683 the Maryland Assembly directed that five new towns be founded in Somerset County. Three years later the "Snow Hill" tract was selected as one of these sites, and the requisite 100 acres were purchased from the Bishop family. Snow Hill was further made an official port of entry for the Province of Maryland in 1706. Although these pieces of legislation were ultimately disallowed by the Queen, many of the towns whose founding they directed took root and grew. When Worcester County was carved from Somerset County in 1742, Snow Hill was resurveyed and designated the county seat. A second resurvey was carried out in 1793. The plat of this survey gives lot numbers, streets and alleys. The evidence on which the survey rests is recorded in the Worcester County Court records.

Snow Hill soon became an important overnight stop for those traveling north and south along the Delmarva peninsula. The town's economic mainstay during its early years, however, was the shipping and receiving of a variety of commodities. Situated at the heart of a rich farming area, Snow Hill exported Eastern Shore tobacco, grain, lumber, and imported manufactured goods. It was also a transshipment point for commodities moving down the eastern seaboard to the Chesapeake Bay, and had a particular trading relationship with the West Indies, receiving rum, molasses and sugar in return for local produce. Just as legitimate trade flourished in Snow Hill, so did its illicit counterpart. Smuggling was carried out through the nearby Chincoteague Bay and down the Pocomoke River. Many tales have been handed down of the brushes if the buccaneers with local customs officials. During this period of growing commercial prosperity, many businesses arose in support of the town's trading economy. Warehouses sprang up along the river, and a wheelwright and a shipwright became established before the mid-18th century. Many of the town's leading citizens during the early years were Scottish merchants who acted as factors, buying produce from the surrounding area, and marketing it through the port of Snow Hill. One of these factors, Robert Martin, had by 1721 purchased most of the acreage surrounding the town and all of the lots in Snow Hill not already sold. His descendants became a decisive influence in the development of the town.

Laid out in what is essentially a grid, Snow Hill's principal streets are Washington Street, Church Street and Morris Street running from north to south, and Market Street, Federal Street and Martin Street running from east to west. The main residential area south of Market Street is made up of broad avenues and large blocks divided here and there by more narrow connecting streets. North of Market Street the blocks are smaller and more irregular, with many of the streets being little more than alleys. Most of Snow Hill's businesses can be found on narrow Bank and Pearl Streets, and on Green Street, which forms two strong diagonals meeting at Washington Street.