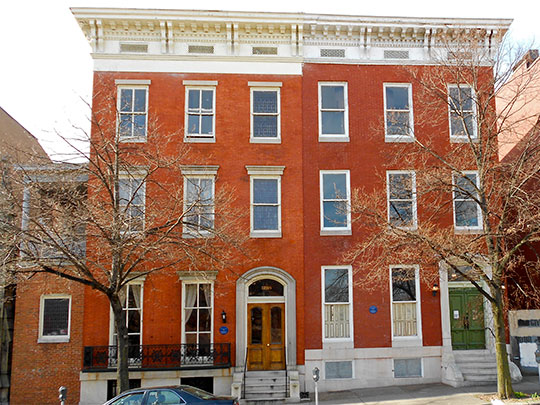 The Bolton Hill Historic District was listed on the National Register of Historic Places in 1971. Portions of the content of this web page were adapted from a copy of the original nomination document. [‡]

Bolton Hill is a Baltimore residential neighborhood with twenty blocks of relatively untouched structures dating from the second half of the nineteenth century; it gives modern Baltimore an image of its nineteenth-century heritage. Since the 1950s Bolton Hill has experienced an architectural revival and is once more a viable urban residential section.

Bolton Hill developed as part of the ever continuing northward movement of Baltimore's residential neighborhoods that has reached beyond the city limits deep into Baltimore County. During the early days of Baltimore when the city's activities centered around the harbor, Bolton Hill was open farm land owned by three men: George Grundy of "Bolton," William Gibson of "Rose Hill" and Dr. Solomon Birkhead of "Mount Royal." By the mid-1830s city streets were pushing northwest over the farm land. An 1834 map of the area indicates the existence of Madison, Bolton, John and Dolphin Streets in addition to Foster, Jenkins and Mason Alley which are extant today (1971).

The distinguishing feature of Bolton Hill is the groups of three-story red brick rowhouses with eight to fifteen dwellings in one architectural group. White marble steps, the rhythmically placed fenestration and doorways, and the wooden cornices frame and accent the otherwise plain facades. Spacious, high ceiling rooms characterize the interiors. Once all single family dwellings, some of these rowhouses have been converted into apartments.

The few detached houses, the five churches, the trees and small parks bring variety to the streetscape. Eutaw Place is known for its vista of green, garden squares with the Francis Scott Key Monument as the southern focal point. Park Place boasts green boulevards and fountains both of which were brought back to life in 1968. Following this tradition, the 1300 block of John Street was recently closed to traffic and turned into a park.

The actual development of Bolton Hill did not gain full momentum until the second half of the nineteenth century. The opening of a street car line along Madison Avenue, the northwestern boundary of Bolton Hill, connected the area with the center of the city. This allowed people to commute easily to "the business district." The proximity of Druid Hill Park, opened in the fall of 1860, to the north, serviced by the same streetcar line, added to the attractiveness of living in Bolton Hill. Bolton Station located at the southeast corner of the district gave residents an easy access to the Baltimore and Ohio Railroad. [see Streetcar Suburbs 1888 to 1928]

Bolton Hill characteristically attracted residents from the business and professional classes. The ample proportions and the solid construction of the houses reflect the substantial character of their residents. The institutions attracted to the Bolton Hill area correspond to the social status of the residents. Three private schools including the fashionable Boys' Latin School were located in or near Bolton Hill. The Maryland Institute of Art and the Lyric Theater — two major Baltimore cultural institutions — are located on Mt. Royal Avenue.

The continuous blocks of rowhouses similar and dignified; the tree-shaded streets; handsome squares featuring sculptural monuments are reminiscent of residential neighborhoods of London and Boston.

Residents of the rowhouse line streets included F. Scott Fitzgerald who lived at 1307 Park Avenue for a brief period in the 1930s. He received the reviews of Tender is the Night and entertained John Dos Passos and Gertrude Stein there. Dr. Claribel Cone and her sister Etta Cone, close friends of Gertrude Stein and Leo Stein, lived in Bolton Hill when they were not in Paris amassing their outstanding collection of modern art. In the 1920s Alger Hiss, whose family lived on Linden Street, was the youthful assistant scoutmaster of the local Boy Scout Troop 104.

Other outstanding residents include a president of Goucher College, Dr. Otto Kraushaar; Gerald Johnson, a journalist and author; the inventor of the Linotype, Ottmar Merganthaler; Leon Fleischer, a concert pianist; Dr. Jesse Lazear who worked on the cure for malaria with Walter Reed; and two outstanding physicians from the Johns Hopkins Hospital: William S. Halstead and Howard A. Kelly.