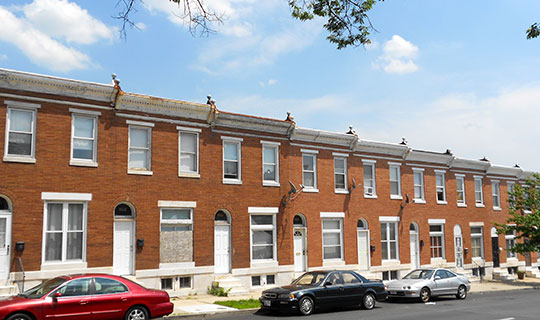 The Broadway East/South Clifton Park Historic District was listed on the National Register of Historic Places in 2002. Portions of the content on this web page were adapted from a copy of the original nomination document. [‡]

The Broadway East/South Clifton Park Historic District is primarily an urban residential area organized in a gridiron plan that comprises approximately 110 whole and partial blocks that formed the historic northeast corner of the City of Baltimore prior to 1888. The area is served by a hierarchy of primary and secondary streets that were extensions of platted streets of Fells Point. The north-south and east-west streets are the largest streets through the area, while narrower north-south streets divide large blocks and serve as service alleys. The development of the area resulted in the construction of high-density, but low-scale two and three-story rowhouses between 1870 and 1930. Rowhouses are the dominant building type in this urban area. The buildings are oriented towards the streets with facades lining the public concrete sidewalks. The rows of dwellings present unified streetscapes. The rhythmic repetition of steps and stoops for the dwellings also contributes to the overall cohesiveness of the district. Street furniture is limited to street lights and bus shelters. Only North Broadway has been landscaped as a boulevard.

Numbering over 4,800, rowhouses constitute the majority of contributing buildings within the historic district. The rowhouses in the district illustrate a clear chronology spreading outward and north from the intersection of North Gay Street and North Broadway. Rowhouse construction was completed in two phases. The majority of rowhouses were built between 1870 and 1915; a second period of construction occurred in the area during the 1920s. The earliest blocks developed were in the southwest corner of the district adjacent to North Gay Street, which was the primary thoroughfare through the area. During the period from approximately 1870 to 1890, development in Baltimore expanded to fill the northeast section of the city boundaries as established in 1816. Rowhouses began to be constructed along East Chase Street, East Biddle Street, East Preston Street, East Hoffman Street, and along North Gay Avenue. From 1890 to 1896, the number of rowhouses constructed nearly doubled as development expanded northward, particularly in the area defined by North Broadway, East Lanvale Street, North Washington Street, and East Oliver Street. In addition, rowhouse construction occurred during this time period along East Lafayette Street and along North Chester Street. Between 1896 and 1915, the numbers of rowhouses constructed again doubled, filling up the remaining undeveloped blocks between North Broadway and North Gay Street and between North Patterson Park and North Montford Avenues. The last blocks within the historic district to be developed were those located between East North Street and Sinclair Lane, which was annexed into the city boundaries in 1888. Daylighter rowhouses were built in this area between 1915 and 1928.

The Clifton estate bounded the project area on the north. Between 1836 and 1873, the property was owned by Johns Hopkins and served as his summer home. In 1852, Johns Hopkins remodeled the ca. 1802 manor house to its current Italianate design. In 1873, Hopkins left the property in trust as the future site of a university.

North Gay Street, historically known as Belair Road, was the major road through the historic district. The road linked the developed parts of the City of Baltimore with rural areas in Baltimore and Harford Counties, eventually continuing to Bel Air in Harford County. The road was in existence by 1800 and was depicted on an 1801 map of the City of Baltimore. At two separate times, in 1859 and again in 1867, different companies were incorporated to operate the Bel Air Road as a turnpike. The road became public in 1911.

In 1816, 13.2 square miles of land were annexed into the City of Baltimore, tripling the city's acreage. The new city boundaries were fixed at North Avenue on the north and at East Avenue, currently Ellwood Avenue, on the east. In 1816, the City of Baltimore Board of Commissioners hired engineer-surveyor Thomas H. Poppleton to prepare a plan for the City of Baltimore in its entirety. Poppleton was tasked with preparing a street plan for the newly annexed land, assigning street names, and delineating new wards for the city (Cox 1986:16). Throughout the northeast corner of the new territory and including the historic district, Poppleton imposed a grid street pattern created by north-south and east-west streets. The locations of the north-south streets through the historic district were in large measure defined by the street pattern already in place in Fells Point directly south of the area. Poppleton extended the streets of Fells Point northward to North Avenue. The north-south streets were depicted on his 1823 map in two widths, a wide major street (typically 70 ft wide) with a narrow street or alley (typically 20 ft wide) dividing the blocks along a north-south orientation. The east-west streets were more uniform in width, typically 66 ft wide. Originally no east-west alleys were planned in the area. The widest streets were North Broadway and North Avenue. Belair Avenue (i.e., North Gay Street) was the only pre-existing road through the area. Poppleton retained its existing path; this resulted in a major diagonal artery that spliced several rectangular blocks, forming triangular blocks on either side of the road.

Poppleton's plan for the development of the northeast corner of the city essentially remained intact when residential development in the area began after 1870. One major change to the Poppleton plan occurred when several blocks were set aside to establish the Baltimore Cemetery. In 1849, an act of the Maryland State Legislature incorporated the Baltimore Cemetery Company as a public stock company. B.A. Lavender, B.C. Smith, J. Vansant, J. Simms, R. Howard, J.S. Nicholas, J. Murphy, C. Barroll, and T.R. Chiffelle were the incorporators. The company purchased 100 acres of land at the northeast corner of the city boundaries; additional acreage also was acquired in Baltimore County. The company was permitted to establish the cemetery on 30 January 1850. The cemetery featured a Gothic Revival chapel and Egyptian-style mausoleum, which were designed by Baltimore architects Chiffelle and Reasin. The cemetery was advertised as a parklike setting that featured avenues and groves of trees ("Baltimore Cemetery" Gleason 's Pictorial 1852).

Recreational uses also were a theme in the early history of the historic district. Picnic parks and beer gardens often operated in conjunction with the breweries along North Gay Street. Bauernschmidt operated a small park, as did von der Horst and Wiessner. The largest recreational facility in the area, however, was the Schutzen Park established in 1866 by the Baltimore Schiitzen Verein (Shooting Club), founded in 1850. Schutzen Park occupied approximately 20 acres in the area bounded by North Milton and North Patterson Park Avenues and East Federal and East Lafayette Streets.

The park was purchased from George Appold, a leather dealer and one of the founders of Merchants and Miners Transportation Company. The park featured a variety of recreational activities, including picnic areas, target ranges, dance floors, a bowling alley, and banquet rooms. The park functioned as a club for the lower classes. Membership in the club peaked at 1,500 families during the 1880s. As many as 20,000 people attended large events held at the park. Schiitzen Park appeared on historic maps in 1882 and 1896. The park probably was closed ca. 1895 since streets were extended through the park grounds in 1895 and building permits were issued for residential construction along the south side of East Lafayette Street in 1896. Schiitzen Park did not appear on the 1902 Sanborn map of the area.

The old northeast corner of the city of Baltimore did not develop as a residential area until after 1870. The area was dominated by industrial, recreational, and funerary activities. The extent of development in this area of the city was depicted on the Sachse bird's-eye view published in 1870. North Gay Street (Belair Avenue) served as the primary transportation corridor. The major north-south and east-west streets were not yet opened. The breweries of Bauernschmidt, Wiessner, Rost, Muth, Engel, and von der Horst were prominently located along North Gay Street. Each brewery comprised a complex of small-scale buildings. Interspersed among the breweries were two and three-story commercial and residential buildings. Some of the businesses along North Gay Street identified on the Sachse view included a saloon and a cooperage; two marble works were located near the Baltimore Cemetery. Picnic parks and Schiitzen Park also were illustrated in the view. A brickyard was located south of Schiitzen Park. Few residential buildings were depicted in the Sachse view. Approximately fourteen rowhouses were constructed along the east side of North Broadway Avenue between Monument Street and North Gay Street; less than ten rowhouses occupied the south side of North Gay Street near its intersection with East Biddle Street.

During the period from 1870-1930, the population of the City of Baltimore boomed. In 1880, Baltimore's population was 332,313; in 1900, it rose to 508,957, an increase of 53 per cent. By 1920, the city's population reached 733,826. The population rise was attributable to four causes: the natural increase of births, the migration of Marylanders to the city, the immigration of foreign-born persons to the city, and the annexation of additional land into the city boundaries in 1888 (Hirschfeld 1941). During the same time period, Baltimore also expanded its role from a major shipping center to a manufacturing center. Between 1870 and 1920, the garment, canning, packing, shipbuilding, and iron and steel making industries developed rapidly. The increased number of workers resulted in a need for working-class housing and a boom in house construction. Between 1880 and 1900, the numbers of housing units increased 76 per cent; emphasis was placed on supplying housing for the working man. It was during this period that Baltimore became a truly "working-class city." These city trends were the reason that the historic district developed as a residential area of rowhouses to support the working class.

By the beginning of the twentieth century, builders and developers were willing to assume more risk by acquiring larger parcels of land. Developers then constructed entire blocks comprising hundreds of lots. This pattern was discernible in the development of South Clifton Park and in the areas between North Patterson Park Avenue and North Montford Avenue.

The Baltimore East/South Clifton Park Historic District typifies the broad patterns of the urban history of the City of Baltimore, particularly the history of the working class, from ca. 1850 through the mid-twentieth century. During that time, the area became increasingly incorporated into the city's urban fabric as development filled up the city boundaries established in 1816. The area followed a typical progression of outlying areas. Until the mid-nineteenth century, the area remained essentially rural. During the 1850s and 1860s, the area became a corridor that attracted six breweries and recreational uses. From 1870 through 1930, the area became residential. The city blocks were lined primarily with two-story rowhouses that housed working people from a variety of ethnic groups. Increased residential construction was accompanied by the construction of public schools, neighborhood churches, a branch library, a bank, building associations, a fire station, and corner stores. The area also retained a few industrial and commercial businesses that typified on a micro scale Baltimore's industrial and commercial base during the period. The increasing urbanization of the area, particularly during the period 1870 through 1930, was assisted by public transportation and improved city services.