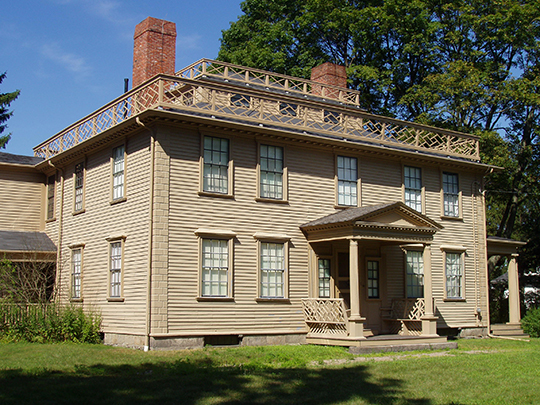 It is quite probable that Capt. John Smith, while voyaging along the coast in 1614 and trading with the natives, landed in what is now Quincy, for on the rude map of the coast drawn by him the coast line can be identified. But the first recorded visit of white men was in the month of September, 1621, when Miles Standish and twelve men came up the coast from Plymouth, anchored in a small cove on Thompson's Island on the night of the 29th, and the next morning landed on Squantum Head, where they found a pile of lobsters, upon which they breakfasted. Taking four men and the Indian guide, Squanto, Captain Standish started out to explore the country. They soon met an Indian woman, who was going after the lobsters they had eaten, and for which Standish gave her something in the way of compensation. Squanto accompanied the woman to her village, which was on the northerly side of the Neponset, while Standish and his companions returned to their boat. Upon their return to Plymouth they gave a favorable account of the country they had visited, "wishing they had been there seated."

In the latter part of the year 1790 about one hundred and twenty inhabitants of the Braintree North Precinct, and a few of those living in Dorchester and Milton immediately south of the Neponset River, united in a petition to the General Court asking that they might be set off as a separate town. The petition came before the Senate in January, 1791, and about the same time a town meeting was called in Braintree to decide on some course of action regarding it.

While the act of incorporation was pending in the Legislature Rev. Anthony Wibird was requested to suggest a name for the town, something the petitioners had failed to do. He declined the honor and then Richard Cranch was asked to supply a name. He suggested the name Quincy, "in honor of Col. John Quincy." Some of the inhabitants wanted the town called Hancock, after Gov. John Hancock, who was then at the height of his personal popularity, though members of the Quincy family had been identified with the town almost from the very beginning.

Not long after the town was incorporated and the local government organized, a building was erected for a grammar school with a hall for holding town meetings. It was destroyed by fire on December 30, 1815, and at the annual meeting on March 4, 1816, a committee was appointed to recommend a plan for a new structure. The report of the committee was as follows:

The first postmaster in Quincy was Richard Cranch, whose commission was dated April 1, 1795. Mr. Cranch, it will be remembered, was the man who selected the name of Quincy for the town, and the justice of the peace who issued his warrant for the first town meeting. Several times he represented Braintree in the General Court and was afterward a judge of the Court of Common Pleas. At the time of his appointment as postmaster the rates of letter postage varied from six cents for carrying a letter thirty miles or less to twenty-four cents for carrying one 450 miles or more. He served as postmaster until his death in 1811, and on January 1, 1812, Dr. Benjamin Vinton was appointed as his successor. During the period of his service, eastern and southern mails arrived and departed three times a week.