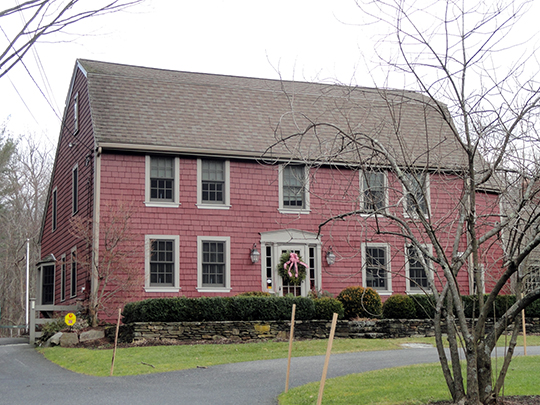 The nutritious grasses of the Charles River lowlands, or "wet prairies," attracted the first English settlers to Boggestow, later Sherborn. In addition, they found forests of white and black oak, hickory, chestnut, pine, and hemlock trees, as well as white cedar swamp and land that had already been cleared by members of the Nipmuck tribe. Initially (1652-1680), English settlement was confined to south Sherborn near the Charles River. While land grants were given to individuals as early as 1643 and the first settlers arrived by 1652, the town of Sherborn was not incorporated until 1674. Early settlement of about 20 families concentrated in the southeastern areas. Several of the early settlers built timber-framed, two-story central-chimney houses, one room deep. While none of these so-called "garrison" houses remain, Sherborn does retain several First Period timber-framed residences. (The earliest portions of the Morse-Barber House, 46 Forest Street, Sherborn's oldest structure, are said to date to 1674. The house was more than doubled in size and extensively remodeled in the early 19th century, and now appears as a Federal period house with Greek Revival style elements.)