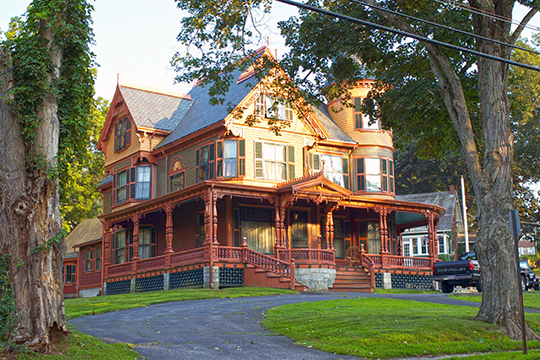 Hudson provided a home to a variety of Native American communities until the middle 1600's when a group of settlers from the Sudbury settlement were granted land in what is now Hudson. A short peaceful coexistence lasted until the rules and regulations of the European settlers chafed enough to result in the King Philip's War. Early Hudson was destroyed but rebuilt after 1675 when Hudson was firmly in the control of the immigrants.

The earliest homes that remain today were associated with farming activities from that early period. Some of both the homes and the farming activities still exist in Hudson. However, a fire in 1894 destroyed many of the buildings downtown. The reconstruction of the entire downtown shortly after the 1894 fire has resulted in a downtown that is architecturally from one period. Recognition of this historical uniformity led the town to designate much of its downtown as a State Registered Historic District known as the Silas Felton Historic District which the town passed unanimously in November 1988. Significant renovations and building alterations within the historic district require design review by the Silas Felton Historic District Commission. This has assisted the downtown in preserving its architectural integrity. Hudson's Downtown today possesses a quaint historic feel and is starting to attract unique art and gift shops, restaurants, and boutique-type home improvement stores. The unique character downtown assists the smaller retail establishments in competing with the larger strip-mall type retail areas south of Hudson downtown on Washington Street / Route 85.

The Town of Hudson, like many other communities in the area, was founded around the water power provided by the Assabet River and Tannery Brook. There are two dams and mill ponds in the community, and numerous mill buildings that developed because of the economic opportunity the water provided. Since the downtown arose to serve mill employees and owners, the older mill buildings are at the periphery of the downtown area. Much of the housing in Hudson is also clustered around the downtown and the mills and originally housed mill workers and managers. Once Hudson distinguished itself as a population and employment center, other economic facilities were located in different areas of Town not necessarily adjacent to the river.