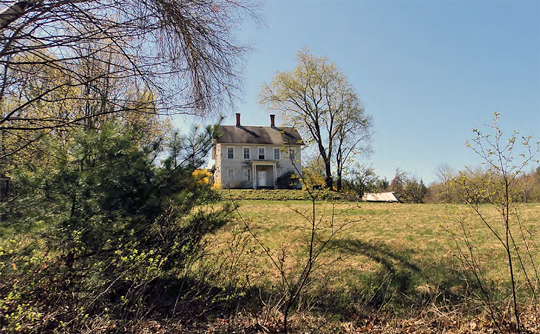 The Moore's Corner Historic District [‡] was listed on the National Register of Historic Places in 2014.

The Moore's Corner Historic District is a late 18th and 19th century agricultural and industrial village whose residents followed the occupational patterns of their time, working as farmers and in the grist and sawmills that over time occupied the waterpower sites on the Sawmill River in Leverett. Theirs was a mixed economy, typical of the small towns of western Massachusetts, where reliance solely on agriculture or industry was not wise or possible due to the nature of the soils and irregular landscape available for farming, and to the limited size of the streams and rivers to power machinery.

The district contains examples of late 18th through 19th century architectural styles and building forms. Federal buildings in good condition are found among the majority Greek Revival style buildings, a Gothic Revival house, a Queen Anne style church, and two vernacular mill buildings. A former meetinghouse and several barns are varied building types remaining in the district. The buildings are by and large modest in scale and ornament, but were well constructed and remain relatively well preserved. A cemetery, with markers representing the trends in marker material and production that characterized portions of Franklin County, contains the graves of many of Moore's Corner's former residents.

Moore's Corner is significant as an example of a village that developed around late 18th and early 19th century roads, as well as a river and a brook that offered sources of power to run industries. Housing and outbuildings for residents who both farmed and worked in the mills or in mill-related work were constructed in the late 18th and 19th centuries; buildings to house a village meetinghouse and school and church make up building types from the 19th century. A village cemetery signifies residents' identity as a separate community in Leverett where villagers were buried near their homes.

Moore's Corner mills are significant for representing the wide range of light industries that came about when falling water was used as a power source for machinery in the 18th and 19th centuries. Waterwheels, and later turbines, enabled people in Moore's Corner to perform the first two functions of early settlements: grinding grain and cutting timber for construction. The importance of these functions is underlined by the fact that one sawmill operated from the 1790s to the end of the 19th century, and the other sawmill worked as a box mill together with a gristmill, and operated until 1937.

Moore's Corner is significant for the Federal, Gothic and Greek Revival style houses that were constructed during the first half of the 19th century in both 2-1/2 and 1-1/2 stories, and continued in smaller numbers into the 20th century. They are representative of the form and style constructed in western Massachusetts in the early industrial villages that were without great wealth, but nevertheless built with features of the styles current in their day.

The agriculture that took place in Moore's Corner is significant not for its strikingly high levels of production, but for its persistence from the late 18th century when settlers all farmed along with starting and running their mills. Agriculture continued into the mid 20th century, when at least one farm took in paying guests in summers and provided eggs for area homes and restaurants.