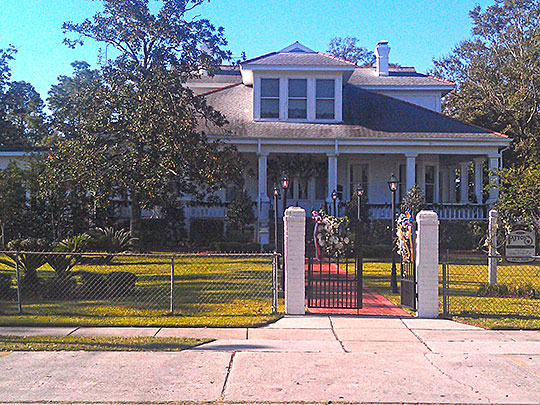 Slidell was one of the last towns to be founded in St. Tammany Parish. Its birth coincided with the arrival of the New Orleans and Northeastern Railroad, which surveyed the townsite in 1883. At this time the parish was already well known for its fine clay deposits, which had furnished the raw material for brick making since well before the Civil War. Slidell became a center of brick making with the arrival of Swiss immigrant Fritz Salmen in 1886. Salmen first established a small brick works in which his employees made the bricks by hand. When the company showed promise of success the following year, Fritz sent for his younger brother Jacob to join him in business. Three years later a third brother, Albert, also joined the firm. True entrepreneurs, the brothers soon branched out, establishing a large lumber mill beside the ever expanding brick works. Fritz and Albert also built homes side-by-side on a street directly across from their industrial complex. In addition, they assumed responsibility for their employees' welfare by building a six-to-eight block neighborhood of small workers houses which became known as Salmen Town.