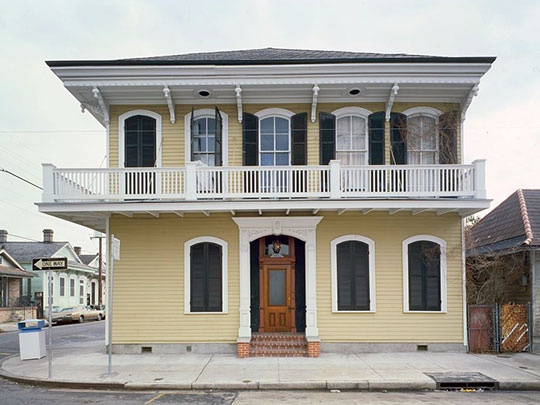 The subdivision of Bernard Xavier Phillippe de Marigny de Mandeville's plantation immediately downriver from the Vieux Carre began when application to the City Council was made to subdivide the property in 1805. The streets were laid out by Barthelemy Lafon using plans drawn by Nicholas de Finiels in a grid pattern with a 135 degree turn just east of Esplanade Avenue at Kerlerec Street to follow the turn of the Mississippi River.

Faubourg Marigny is today a community of 19th and 20th century culture and urban development. The structures are predominantly one and two story Creole cottages intermixed with excellent examples of Greek Revival, Victorian, and Edwardian architecture as well as interesting composites of the 20th century. The dwellings range from small four room cottages to stately mansions.

The term "Creole Cottage" is of fairly recent coinage used to describe a dwelling of relatively modest proportions, of one or one and a half stories, roofed with single or double pitch or canted at the eaves, side gabled and usually dormered, sometimes with a built-in gallery at the front. In Marigny they are generally set at the street property line, with alleys at the sides, four-roomed without corridors and with chimneys in the interior walls.

The area demonstrates a mixture of commercial and residential uses with riverfront industry. All the buildings of the area are usually located directly on the street with no front yards. Narrow side alleys are common with houses in close proximity to one another. Rear yards often feature walled patios and servants quarters. Brick sidewalks of herringbone pattern and granite curbs have few street trees with Washington Square (bounded by Frenchmen, Dauphine, Elysian Fields, and Royal) being the major landscaped focus. The Square has a double alley of live oak trees around its periphery which were planted in the mid-19th century and it is enclosed by a cast iron and granite fence. Wood and cast iron balconies are abundant and add to the intricacy of the street scapes.

The subdivision just downriver of Faubourg Marigny proper was known as Faubourg Daunois, but this subdivision has been bisected by the Press Street Industrial Corridor. The upriver portion of Daunois, similar in culture and architecture, has come to be considered a part of the Marigny area.

Although many streets have been renamed and new generations of residents assimilated, there still exists a Faubourg Marigny (in 1974) of predominantly 19th century structures built with fine craftsmanship and materials. Even the few 20th century intrusions such as 7 story Christopher Inn fronting Washington Square and "Mansard Revival" apartments have not stopped the intensive rehabilitation and restoration effort of both long-term and new residents. Their strong sense of identity and pride with Faubourg Marigny has served as a catalyst for adjacent and other inner-city neighborhoods. This assimilation of change and promotion of continuity have made this area a unique and human example of what urban life should and can be.