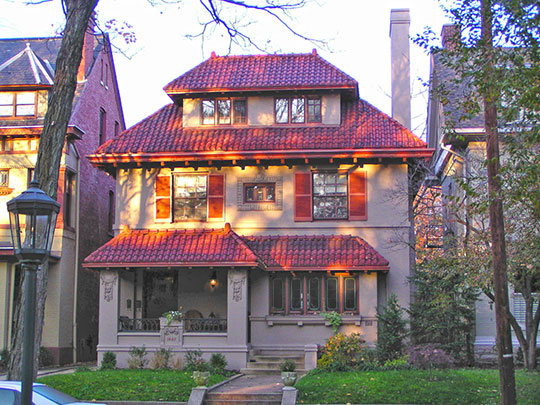 The William J. Dodd Residence was listed on the National Register of Historic Places in 2010. Portions of the content of this web page were adapted from a copy of the original nomination document. [‡]

The William Dodd house is a 2-1/2 story Arts and Crafts style single family home built in 1911. It is located at 1448 St. James Court, in Louisville, Kentucky's largest city and seat of Jefferson County. The house was listed in the National Register as contributing to the St. James-Belgravia Historic District. The St. James-Belgravia District was fully incorporated into a larger district, Old Louisville Residential District, on February 7, 1975. The property sits 1.5 miles south of Louisville's Main Street. St. James Court and Old Louisville were early residential suburbs. The property contains a house and a modern garage.

St. James Court was laid out in 1890 on the former site of the Southern Exposition, an industrial, agricultural, and cultural exhibition which attracted several million visitors from 1883 to 1887. The Exposition was remarkable for its 13-acre wooden exhibition hall and 4,600 electric lights installed by Thomas Edison. St. James Court is two city blocks in length with a broad central green, a Victorian fountain at its center, mature trees, and gas lights. St. James is transected in its southern portion by a pedestrian residential street, Belgravia Court. St. James Court contains homes built for well-to-do persons of Louisville's "gilded age." These buildings include a mansion, single family homes, apartments, and townhouses of 2 to 3 stories. They were constructed from 1892 to 1911.

The house is flanked to the north by a 1905 Classical Revival house and to the south by an 1893 Victorian home. Front porches of the homes align and the heights of the buildings are similar. A small front lawn slopes down to a low wall and broad sidewalk on the west side of St. James Court. The house and its neighbor to the south are 6'2" apart; the same amount of space separates the Dodd House from its neighbor to the north. Landscaping screens the right (north) side of the house. The space between houses to the north is lined with gravel and terminates at a fence between houses toward the rear.

A walk runs along the left side of the house, leading to a side entrance and access to the rear yard. Two coal chute doors adjoin the walk. Wood fencing encloses the sides of the back yard. The Dodd house's back yard features gray stone patio areas and red brick walkways. A fountain is in the center of the back yard. Irregularly shaped beds of grass, perennials, and ornamental trees complete the yard.

From 1913 to 1919 the Dodd house was home to William S. and Effie B. Culbertson. Emma C. Baldwin lived there from 1919 to 1945 and Nell DeHart from 1945 to 1975. Mrs. DeHart converted the house to four apartments in 1956 and lived on the first floor. Charles Owen acquired the house in 1975; he too lived on the first floor and rented the upper floors, until 1988. Mr. Owen kept the house, without renters, until 2002. There have been two owners since 2002. Throughout these times the integrity of the house has been preserved owing to three factors: 1) owners chose to occupy the house throughout its service as a multifamily dwelling; 2) the house has had a low turnover of owners, with just four owners from 1913 to 2002; and 3) the apartments were created mainly by closing doors and adapting existing spaces for new uses, avoiding extensive remodeling.

The Dodd House has Arts and Crafts details overlaying a Foursquare plan. It has a wood frame structure and its exterior walls are covered in taupe-colored stucco. Red terra cotta tiles cover its hipped roof. The facade is ornamented by a bracketed cornice, cartouches, art glass windows, and built-in planter boxes.

The steep tile roof and its detailed cornice dominate the second floor. A third floor dormer penetrates the roof and contains two groups of three casement windows. The dormer continues the steep roof lines of the porch and main roof. A single chimney rises above the roof on the right. The cornice and tile roof extend two-thirds of the depth of the house. The chimney protrudes 10 inches and is 6'6" in width. Groups of art glass windows in the foyer and dining room face the left and right sides respectively.

The front of the house is symmetrical on the second floor, with two shuttered windows flanking a smaller central window with decorative surrounds. A simple belt-course distinguishes the first from the second floor. The first floor has a porch on the left (south) half of the front, balanced by a projecting bank of 5 art glass casement windows. A tile roof covers the porch and extends across to cover that bank of windows. A shallow planter box of stucco runs beneath these windows. The porch is 14' wide by 10' deep. The porch roof is supported by two simple piers ornamented by cartouches. In the center of the porch is a stucco planter box ornamented with leaves and coin shapes.

The front door, on the left side of the porch, is 4' wide and 8' tall and contains an art glass window. This window introduces motifs that recur in the house—rectangular geometric designs of green, yellow and orange are in each corner, and a group of oak leaves and acorns fills the center.

The right (north) side jogs in 9'3" at the rear of the dining room, to a sun porch, called the "conservatory" in a 1911 feature written about the house in the Courier-Journal newspaper. In this wall French doors open to the dining room. The house then continues back 19'5" with its conservatory. The exterior walls of the conservatory are a double set of fixed windows extending from the floor to just below the ceiling. These windows have inner and outer panels separated by four inches of air, an early effort at double glazing.

Broad wood steps connect the doors of the conservatory and kitchen to the back yard. All trim on the house and garage—cornices, windows, and doors—is painted a dark red, similar to the roof tiles. One sees essentially two colors, the red of the tile and the taupe color of the stucco, throughout the exterior views.

The house was constructed in 1910 for Dodd and his wife, Ione Estes.