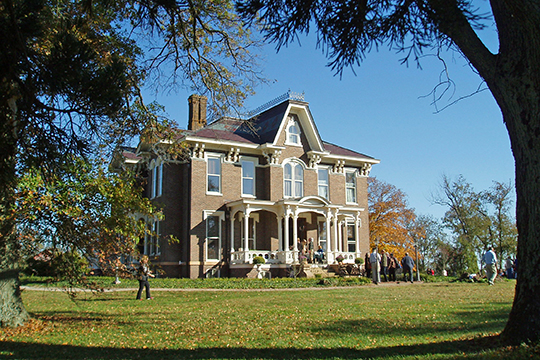 The town now known as Paris was founded in the 1780's. The new settlement, first called Hopewell and later Bourbonton, was established at the confluence of Bourbon County's two major waterways, Houston and Stoner Creeks. It benefited from its proximity to the Maysville Turnpike, a former buffalo trace which at the time was one of the major roadways west of the Alleghenies.

From its earliest days, Paris functioned as the principal town of Bourbon County, one of nine counties created by the Virginia legislature while the Kentucky Territory was still part of the Old Dominion. Bourbon County's rich farmland attracted many settlers from Virginia, Maryland and Pennsylvania, and both the county and its new seat of government experienced steady growth over the next half century. The first Bourbon County Courthouse was built in Paris in 1787, and two years later an act of the Virginia legislature officially established Paris as the county seat.

Although little to date has been written of city's first decades (1780's through 1830's), it is clear that by late 1780's the city had begun to develop its own social, educational and religious institutions as well as its own commercial establishments. By 1790 several taverns and hotels had opened, including James and Ann Duncan's Duncan Tavern, "at the sign of the Goddess of Liberty," and a nearby rival establishment operated by Thomas Eads, the city's first postmaster. The city's role as the educational center of the county was established by the late eighteenth century with the opening of several schools, including the Lyle Seminary for Young Ladies, the first girls' school west of the Alleghenies. By the end of the century several religious congregations had been formed, served by traveling preachers. As of the early 1800's the city had begun to develop its own manufacturing base, and several factories were established to process the products of surrounding farms. These industrial concerns included saw and grist mills, carding factories, cotton mills, and hemp processing operations. In 1800, the United States Census estimated the town's population at 337. Ten years later it was 838. By 1830, it had reached 1,219.