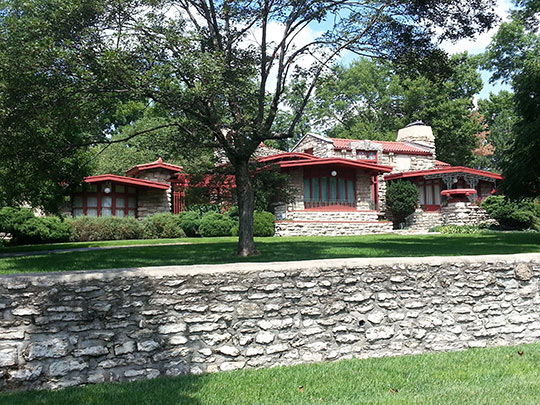 The Westheight Manor Historic District was listed on the National Register of Historic Places in 1975. Portions of the content on this web page were adapted from a copy of the original nomination document. [‡]

Westheight Manor, a planned residential subdivision was platted in August, 1915. Jesse A. Hoel, a prominent real estate developer, was the owner. Later that same year H. L. Kerr, the owner of adjoining property, also had his land platted. The whole area was planned by Hare and Hare, an established firm of landscape architects in Kansas City, Missouri. (Sid J. Hare was in the first class in city planning taught in the United States at Harvard. S. Herbert Hare has in retrospect been described as the outstanding city planner of the Middle West.)

Careful consideration was given to the natural, rolling terrain when the subdivision was platted. Streets were broad and sweeping and on two of them triangular islands were placed at some street intersections. The entire area was very sympathetically laid out and was carefully landscaped in keeping with a plan prepared by Hare and Hare.

During the years when this subdivision was being developed, Westheight Manor was considered the choice residential area in the city, where leading citizens purchased lots for their houses. Prominent architects of the day, such as Louis Curtiss, Courtland Van Brunt and Edward Delk, prepared plans for houses in the area.

Two buildings the Hoel house at 2108 Washington Boulevard C1916) and the Miller house at 2204 Washington boulevard (1921-1922) are definitely known to be the work of Louis Curtiss and at least five more in the district, demonstrate his characteristics and style and are believed to be his work.

The Harry G. Miller, Sr., house at 2204 Washington Boulevard was Louis Curtiss' last house design. Built in 1920-1921 it is an Eclectic/Early Modern house, white stucco on wood frame with decorative use of brick and tile and a red Spanish tile roof. It is somewhat Spanish in character but with the marked horizontal lines and ranked casement windows typical of Prairie School architecture. The typical Curtiss functional plan is expressed in the exterior forms, Chinese trellis patterns, planting boxes, etc. The house has an extraordinary living room, with raised stencils covered in gold leaf, which dominates the interior.

The A. A. Tomelleri house at 2219 Washington Boulevard is a compact Italianate villa with certain eclectic features typical of Louis Curtiss, including the volumetric expression of interior spaces, polychrome decoration, planters, and a marked horizontal disposition under the broad Spanish tile roof. Also typical of Curtiss' work and that of other avant garde architects of the period is the careful placement of the house on the site so that it becomes almost a feature of its natural surroundings. Louis Curtiss is believed to have been the architect of this house, but that cannot be presently documented.

The L. C. Haynes house at 2300 Washington Boulevard is another structure believed to be the work of Louis Curtiss. A two story Eclectic/Early Modern wood frame house, it is faced in dressed gray stone and has a Spanish tile hipped roof. It is much more formal than is typical of Curtiss' work but it still has many stylistic similarities. Some of the finest features are the long rows of tall casement windows with geometric patterning of wood mullions typical of the best American and English architecture of the period.

The Mrs. Rosemary Krall house at 2310 Washington Boulevard is the second of the two original houses in the Westheight area prior to the platting of the subdivision. It is a two story red brick Victorian house to which semi-Colonial details were later added. The carriage house to the rear repeats the general style of the house but in a much more playful manner. It was possibly the original home of H. L. Kerr, a co-developer with Hoel of Westheight Manor.

The Lawrence Ellis house at 2000 Washington Avenue was possibly designed by Louis Curtiss. An Eclectic/Early Modern house, it is white stucco on wood frame with decorative use of brick and polychrome tile, ranked casement windows, terraces and planters, and a green Spanish tile roof. The similarities to the Miller house are too marked to make the authorship of much question. Of particular note is the way the two sets of steps curve and recurve as they descend the high grass terrace.

The Hubert Floersch house at 1301 North 22nd Street is a two story stucco house with wood and brick trim and a broad-eaved hipped roof in the style of the Prairie School. It is typical of the small cubical Prairie house as seen repeatedly in the work of William Drummond and Walter Burley/ Griffin and ultimately based on Frank Lloyd Wright's design for the Ladies Home Journal in 1902.

The Edwin A. Hosking house at 1211 North 22nd Street is a two-story wood-trimmed stucco house related to the Prairie School style. The horizontality of this design is very pronounced with parapets screening a flat or very low hipped roof. It is less accomplished than the Floersch house but in some ways more daring. The essential original character of the area has been carefully maintained through the years. The houses are kept in good repair and the lawns, which have an unbroken sweep to the street curbs, are in fine condition.

The Westheight Manor District contains other residences of substantial architectural interest, and practically all of the homes are very well maintained.

Besides the Curtiss-designed/influenced structures, there were many other fine residences constructed in the district in the 1920's and later. The houses reflect the range of styles popular in the 1920's and also the progressive tendencies and influences of the period.

The Westheight Manor District is the most attractive residential area in Kansas City, Kansas. It has survived intact to a remarkable degree. It is significant as an example of the planning of Hare and Hare, landscape architects. The work of Louis Curtiss provides additional significance to the area. Official recognition of the historic value of this area encourages the continued integrity of the district.