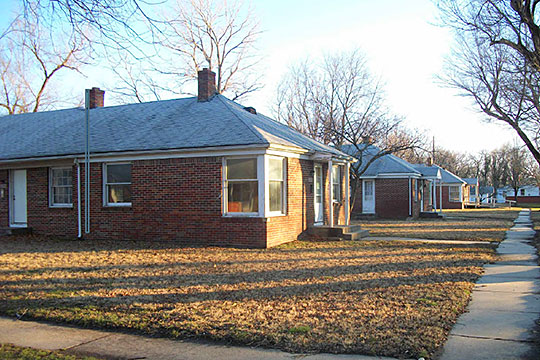 The Linwood Place Historic District was listed on the National Register of Historic Places in 2013. Portions of the content on this web page were adapted from a copy of the original nomination document. [‡]

The Linwood Place Historic District is a 40-acre property on the south side of Wichita, northwest of Wichita's aircraft related industrial district. The District is comprised of two full additions to the City of Wichita, the Linwood Place Addition, platted on January 20, 1943 by R. H. Garvey and his wife Olive, and Darrah's First Addition, platted by the Garveys' son Willard on May 28, 1949. The District is an excellent example of the Fourplex Multi-Family Residence Property Type and is a typical Early Automobile Suburb.

Although the arrangement of streets and buildings in the Linwood Place Historic District conforms to the U. S. Department of Housing and Urban Development (HUD) guidelines that encouraged conformance to the landscape, they are situated on a site that is mostly flat. Buildings in Block A and the west half of Block B of the Linwood Place Addition are arranged on a grid, with mature trees lining Hydraulic and Kansas Avenues. These buildings are arranged in pairs, with front entrances of facing buildings connected by a grid of north/south concrete sidewalks, and buildings connected to off-alley parking areas by east/west sidewalks. Buildings in the east half of Block Band Blocks C and D of the Linwood Place Addition are arranged along the winding tree-lined streets of Minneapolis (formerly Chisholm Lane) and Minnesota Avenues. Buildings in the east half of Block B have parking off the alley to the west. There is additional parking along the east side of Minneapolis and east and west sides of Minnesota where there are no alleys.

As the nation readied for World War II, policymakers and businessmen engaged in a debate over the government's role in filling the need for defense-worker housing. Some reformers believed the government should take the lead. Businessmen believed the task should be left to private enterprise. Ultimately, much of the housing was constructed through public private partnerships, by housing developers backed by government finance programs like the Federal Housing Administration (FHA).

In 1940, defense-worker housing again took center stage. President Roosevelt created the position of Defense Housing Coordinator, appointing Charles Palmer to the position in July 1940. Palmer commissioned a study entitled Housing and Defense, which urged the U.S. Government to make workers' housing a priority of the nation's defense program. The report became the basis of the Lanham Act, which provided $150 million for defense housing. The majority of the 625,000 units built by the federal government were designed to be temporary so as not to compete with the private development of permanent housing.

R. H. and Willard Garvey were among the many businessmen who believed that Wichita's wartime housing shortage could best be addressed by the private sector. But at a time when capital and building materials were in short supply, government programs like those of the Federal Housing Administration (FHA) were essential to the success of their projects. Builders, Inc. had applied for FHA financing by 1941, when it submitted plans for wood-framed single-family homes in the 1800 Block of Garland Avenue in Wichita. In an April 1941 letter, R. H. Garvey inquired about a builder's ability to "build some of our houses for us." He continued "We have applied for permission to build 93 of them." Once the U.S. officially entered the war and Wichita's aircraft industry drew thousands of new workers to the community, Garvey ramped up his housing efforts, apparently turning his focus from small single-family homes to multi-family buildings. At the Linwood Place Addition, platted by R. H. and Olive Garvey on January 20, 1943, they would build fourplexes.

Linwood Place Addition was designed to meet federal requirements and to attract defense workers. Although the subdivision was a few blocks farther from the aircraft plants and McConnell Air Force base than Beechwood, Planeview and Hilltop, these brick fourplexes were better built than the FHA's temporary housing. The plat for the Linwood Place Addition followed the guidance in the FHA's Land Bulletin #1: Successful Subdivisions. As recommended, the development had long blocks with lots perpendicular to the street and traffic flowing toward thoroughfares. Like the plat, the buildings were designed in accordance with FHA guidelines. Unlike the model Garden City developments, the buildings at Linwood Place were not multi-story; but they did employ the touted streamlined Colonial Revival design elements, from red brick to multi-pane windows to pedimented stoops. In addition, the units had simple floorplans with a living room, efficient kitchen with small dining area, hall with built-in cabinets and drawers, bathroom and bedroom. Although the buildings had standardized plans, the developers created architectural interest by alternating between hipped and gabled roofs.

Builders, Inc. built fourplexes on two of the four blocks in the Linwood Addition during the war, with twenty-six fourplexes in Block A and ten of the twenty in Block B. For unknown reasons, perhaps wartime materials shortages, Builders, Inc. constructed two of twenty-six original fourplexes with blond brick rather than the standard red brick used for the balance of the buildings. All of the buildings along Hydraulic and Kansas were built by 1946.

Development of the Linwood Place Addition continued in the years following World War II as Wichita ramped up production for the Korean Conflict. The development of the east half of Block B, as well as Blocks C and D was underway by February 1947, when R. H. Garvey wrote to Kansas Gas and Electric that he "advised [them] some time ago that we are building eleven 4-plexes from Hodson to Levy on Minneapolis and Minnesota and two on Levy Street from Minnesota to Swan." He continued, "We now wish to advise that we are building fifteen more 4-plexes on Minnesota from Hodson to Levy, a total of twenty-eight 4-plexes, in Blocks C and D." By late February, Builders Inc. had "started building 4-plexes on the east side of Minnesota in Linwood Place between Levy [now Mt. Vernon] and Hodson. I think we have 24 units under construction, and need electricity very badly for electric saws... " Eleven of the buildings were completed in time to be listed in the 1948 City Directory. The remainder of the buildings in the Linwood Place Addition had been completed by 1951.

Once the lots in the Linwood Place Addition were filled, Builders Inc. expanded the development to the southeast. R. H. Garvey's son Willard platted Darrah's First Addition on May 28, 1949. Although this part of the development housed similar fourplexes, the buildings were placed on lots of varying sizes and shapes. In Block 1, eight fourplexes were arranged around a circle drive called Stafford Court and eight others were arranged both parallel and perpendicular to Minnesota. In Block 2, eleven fourplexes were placed in alternating pattern - fourplexes parallel to Minnesota flanked by fourplexes perpendicular to Minnesota. Although the twenty-seven fourplexes in Darrah's First Addition were built by 1951, the units at 1918-1930, 1936-1944, 1948-1950, and 1956 Stafford Court had not yet been leased.

Although these fourplexes were similar in floor plans and overall appearance to the preceding buildings in the Linwood Place Addition, there were subtle differences. Whereas the Linwood Place fourplexes had alternating rooflines, some had hipped roofs and others had gabled roofs: At Darrah's addition, all roofs were hipped. In addition, corner windows, brick chimneys, and varying wall planes were dispensed with. The result was a more streamlined version of the fourplex with a simple rectangular footprint.

Although the development has remained relatively unchanged since the early 1950s, it was affected by the 1971 construction of the Canal Route. From the beginning, both Linwood Place and Darrah's First Additions were bordered on the east by the Wichita Drainage Canal. In 1971, construction began on a short stretch of Interstate 1-135 that followed the route of the drainage canal. The $32 million six-lane highway, completed in 1979, may have been the reason that the building at 2102-2108 Minnesota, in the northeast corner of Block D, was razed.