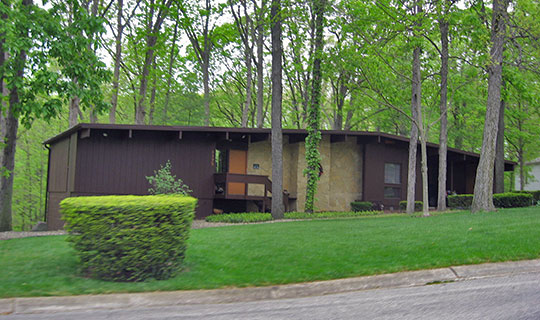 West Lafayette is home to the main campus of Purdue University.

August Wylie platted the first town of West Lafayette on November 18,1836 opposite a gravel bar that was used to cross the Wabash River when the water level was low. The town plat consisted of 140 building lots. Although lots were sold and buildings were erected, the town failed once it was learned that it was located within the flood plain of the river.

In April 1855, the town of Kingston was platted on the west banks of the river on land owned by Jesse Lutz. It was located in an area now bordered by Northwestern Avenue, Salisbury Street, North Street and South Street. The Chauncey family, land speculators from Philadelphia who never lived in Tippecanoe County but who invested in real estate here through the efforts of Henry L. Ellsworth (see also: Ellsworth Historic District), platted land adjacent to Kingston on January 18,1860. Beginning in 1866 the area was known as Chauncey until 1888 when the name was changed to West Lafayette.

The first school in the town was located at the corner of North and Salisbury Streets; it was of log construction and was later replaced by a frame structure. The frame structure is now part of a house on Wiggins Street.

West Lafayette's business district was in the area known as the "Village" where Jesse Andrew's grocery store, Gates Wagon Shop at North Chauncey and State Street, and to the west Jim Allen's blacksmith shop were located. The former Purdue State Bank Building, designed by noted Chicago architect Louis Sullivan, is located in the area. This building, one of Sullivan's "jewel box" banks, was altered in 1957. Much of the acclaimed terra cotta ornamentation remains on the building.

Private companies were involved in the early improvement of West Lafayette's dirt roads. Toll gates were located on these roads just west of Purdue University on the County Farm Road, on North River Road and on Northwestern Avenue on the site of the Purdue Field House. Legend has it that Dodge Street earned its name because people used it to "dodge" the Northwestern gate on the way to Grant Street.

As the town continued to grow, West Lafayette was incorporated as a city in 1924, electing M. B. Morgan as its mayor. The town's tremendous growth during the early twentieth century is reflected in the houses included in the West Lafayette Historic District.

The area's close proximity to Purdue University enabled employees of the school to live close to their workplaces. Most of the district's houses are modest bungalows built between 1910 and 1920. Chauncey Avenue and Salisbury Street are lined with these one and one-half story frame houses.

Scattered throughout the district are more elaborate houses such as three residences on DeHart Street built in the Colonial Revival style. Also included are examples of the American four-square house and the English Cottage style.