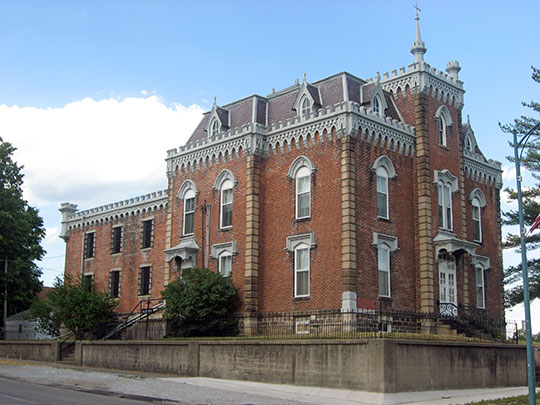 Albion, seat of Noble County, is a distinction gained not without struggle. The first courthouse and jail of Noble County were built in Augusta, a small village two miles west. When the courthouse was destroyed by fire in 1844, the county seat was moved to Port Mitchell, three miles southwest of Augusta. This was unsatisfactory to more of the residents of the county, and the State legislature provided for an election to select a new county seat. Four towns — Ligonier, Rochester, Northport and Springfield — entered the race, together with a nebulous settlement designated on the map of the county as "the Center." It took a year and three elections to settle the county seat question. Finally, "the Center" won, and its name was changed to Albion. Some of the towns taking part in this county seat war are no longer extant.

Before the Civil War nearly all the residents of Noble County were opposed to slavery, and "passengers" on the Underground Railroad passed through the county regularly on their way to the Canadian border. The section of the Railroad between Albion and Kendalville was run by a three-man committee, with a fourth as "station agent, conductor, engineer and flagman."

As early as 1844 Albion was on the mail route running from Wolf Lake on the Goshen Road, thence to Lisbon on the Lima Road. These roads were mere paths through the woods, and during the winter months and after heavy rains travel was difficult. Carriers rode horses as a rule, but tradition has it that one, John Hall, preferred a gentle bull.