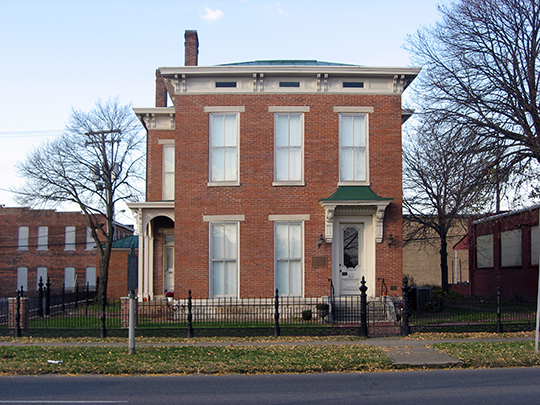 Columbus, seat of Bartholomew County, is a farming center and a manufacturing city. Because of this dual economy, Columbus has been less affected by the depressions than many other communities of similar size. It has a large business district, stretching north along both Jackson (US 31) and Washington Streets, five blocks from the old courthouse square, site of the early town center.

The principal industries are a large automobile accessory plant, a diesel engine plant, two tanneries, a shirt and overall factory, and a fork- and hoe-handle company. Columbus has benefited physically from these industries, since company officials have built many new and expensive residences in the northern section of the city. Fine houses, however, are not confined to this section but are found in any part of the city, with the exception of a small slum area "across the tracks" and in the White River bottom lands. This collection of makeshift cabins is known locally as "Death Valley."

The site of Columbus was settled by general John Tipton, John Lindsay and Luke Bonesteel, each of whom purchased land here in 1820 and built cabins along the east bank of the White River. The tiny settlement was called Toptonia in honor of General Tipton who, in 1821, offered to donate 30 acres of his holdings for the county seat, if the new town was named after him. The county commissioners agreed and accepted the land, whereupon they promptly named the county seat Columbus. The indignant general left shortly thereafter to settle in northern Indiana. The new county seat did not fare well in its early days. Owing to the low swampy site, malaria caused frequent deaths among the residents, and this condition was not remedied for many years; as late as 1840 a portion of the town square was covered with water.

Some of the prominent men who have lived in Columbus are Kent Cooper, head of the Associated Press; William G. Irwin, National Chairman (1938) of the United States Chamber of Commerce; and Ken Maynard, here of many Western movie thrillers.