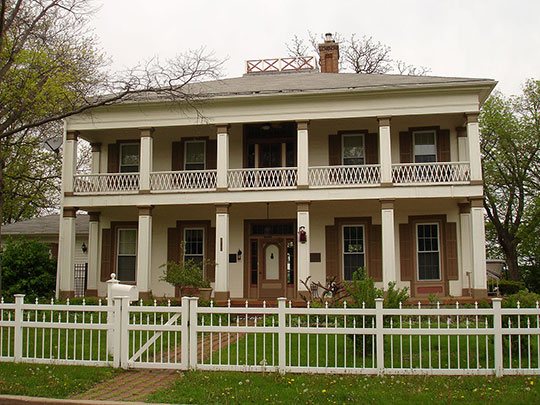 The City of Ottawa is located at the confluence of the Illinois and Fox Rivers in LaSalle County, Illinois, just twelve miles east of the terminus of the Illinois and Michigan Canal. It was platted by the Canal Trustees in 1830 with a canal route that cut across the city just north of the business district. Construction started in 1836, and the canal opened to barge traffic in 1848. Railroads heightened the city's growth, with the Chicago Rock Island and Pacific coming in 1853 and the Chicago Burlington and Quincy in 1867. Besides its early role as an agricultural and later industrial center, Ottawa has always served as the county seat of LaSalle County with an impressive historic courthouse located downtown. Ottawa is connected to the Chicago metropolitan region—just 84 miles away—by Interstate Highway 80.

The East Side of Ottawa was the only one of these three sections that was historically purely residential in character, with almost no non-residential development. Lack of access to the canal and railroads discouraged any large-scale commercial and industrial building; its proximity to the central business district and its relatively small size also meant that the East Side didn't need to develop its own secondary commercial district as South Ottawa did.

The pattern of residential development in East Ottawa also differed slightly from what occurred in Central/West Ottawa and South Ottawa. In Central/West Ottawa, large, high-style houses for the city's upper-class professionals were built in concentrated areas like Washington Square Park, and along Ottawa Avenue, while workers housing tended to concentrate nearer to the industrial centers along the canal and railroad. In South Ottawa, the bluffs along the south bank of the Illinois River were a draw to the city's elite from the mid-19th century, while areas farther south featured more modest residential development for middle-class residents.

Residential development in East Ottawa was less stratified, and featured impressive houses built for the upper class mixed with smaller houses, often vernacular types, built for the middle-class. This building pattern is evident in the district from the mid-19th century through the early 20th century.

In 1853 Ottawa, which had grown from around 1,000 residents in 1840 to over 3,000 citizens, was incorporated as a city. As part of the city's incorporation, Ottawa was divided into five wards. The area east of the Fox River, where the East Side Historic District lies, was named the second ward. The incorporation also marked the joining of Ottawa with south Ottawa, on the other side of the Illinois River. The first toll bridge was built over the Illinois River in the mid-1850s, and the first bridge across the Fox River soon followed, allowing for easier travel among the newly-incorporated city's three sections.

In 1853, the first passenger train on the Chicago, Rock Island & Pacific railroad line from Chicago to La Salle passed through Ottawa. The tracks closely followed the path of the Illinois & Michigan Canal as rail came through town. The coming of the train reinforced and expanded the pattern of commercial and industrial development already established by the canal. The passenger service provided by the railway made the area more attractive to potential residents. A second railroad, the Chicago, Burlington, and Quincy Railroad, arrived in Ottawa in 1867, coming through South Ottawa just west of town, and running along Walnut Street north of the Illinois River before following the Fox River feeder at the north end of town. The 1850s also mark the first period of public improvements in the new city. In 1856, the city's first gas plant was built near the hydraulic basin, and served the courthouse and street lamps throughout the commercial district. In the coming decades, gas was slowly supplied to residential areas. The city's first water system was established in 1860, and was replaced with an expanded system in 1895.