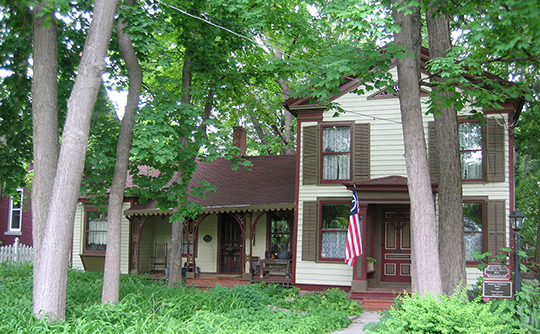 Belvidere, in the valley of the Kishawaukee River, was founded in 1836. Today a commercial and manufacturing city of diversified interests—the National Sewing Machine Plant, State St. and the river, dates from 1879—Belvidere was of early significance as a principal stop on the Chicago–Galena stage route. Among those who lent color to the young community was Big Thunder, a Potawatomi chief. So popular was he that after his death his body lay in state in a small stockade near the site of the present courthouse. Soon the chief's knife, tobacco, and most of his clothing disappeared. In course of time even his bones were filched by souvenir hunters, who, passing through the town by stagecoach, visited the stockade while the horses were being changed. But the young men of the village, wishing to keep the stockade attractive to tipping travelers, obtained a supply of sheep and hog bones and solemnly distributed them to curio collectors as part of the remains of Big Thunder. A memorial boulder on the grounds of the Boone County Courthouse, facing City Park, marks the Grave of Big Thunder.