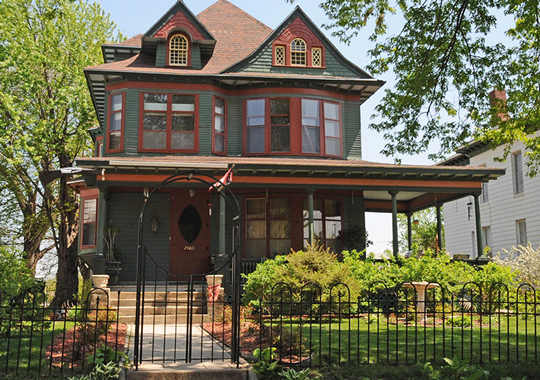 The Rose Hill Historic District [‡] was listed on the National Register of Historic Places in 2002.

The Rose Hill Historic District is a rectilinear neighborhood located seven blocks north of the downtown at the crest of a hill roughly bounded by 18th Street on the north, the alley east of Douglas Street on the east, 14th Street on the south, and the rear property lines of lot along the west side of Summit Street, formerly Water Street, on the west. Grandview Boulevard, originally named Pearl Street, extends north-south through the center of the district with short stretches of 15th, 16th, and 17th streets intersecting to create an irregular block grid. Steep inclines along the east and west boundaries of the district have restricted the construction of through north-south alleys.

All of the Rose Hill Historic District is contained within the Rose Hill Addition laid out in 1884 by a group of Sioux City entrepreneurs. The three north-south streets, Douglas, Grandview and Summit, were laid out with standard 80 foot widths while the east-west numbered streets have 66 foot widths.

Houses throughout the district are sited level with the street on slight upgrades, or in a few instances, on substantial inclines. When originally developed in the late 19th century, early photographs show the area consisted of rolling prairie most likely used for grazing. Soon after the area was developed trees were planted in the parking strip. The age of current day trees suggests that considerable planting took place between World War I and II. Street plantings included silver maple, ash, hackberry, American elm, and a few catalpas with conifers generally reserved for settings within private lots. Dutch elm disease decimated the elm trees by the 1970. Today streets in the Rose Hill neighborhood are linked by a mixture of 60 to 80 year old trees measuring 40 to 75 feet in height. There are no natural water features within the district. One small city playground known as Rose Hill Park is located on a vacant lot at 1431 Grandview Boulevard in the district The nearest city park is Grandview Park established in 1908 and located at the terminus of Grandview Boulevard and 24th Street.

The Rose Hill Addition was platted on July 3,1884 by a group of Sioux City entrepreneurs who sought to cash in on the housing development boom. They included James E. Booge, William H. Livingston and his wife Anna, Orville J. Taylor, and Ransom J. Chase. The business interests of these men ran the gamut of Sioux City's local economy. Booge was the pioneer founder of Sioux City's livestock business setting up the city's first packing plant in the early 1870s. The Livingstons owned and operated a clothing and dry goods business bearing William's name. Chase and Taylor were both attorneys and business partners in a local law firm prior to Chase's retirement from the business in 1883.

The Rose Hill Addition included a 32-acre tract of prairie that covered a hilly section north of the city. Some of Rose Hill's lots overlooked the downtown, which was located less than a mile to the south. During the summer of 1884 Rose Hill's proprietors spent more than $3,000 cutting and grading of the hill for streets, leveling building lots, and extending utility lines. Lot sales proved disappointing but grading activity continued into 1885. The options given homebuilders in other residential subdivisions such as Highland Park, Higman's Addition, Kirk's Addition, and the nearby Hedges Addition may have created a temporary oversupply. The year-end account of building activity in 1884 that appeared in the Sioux City Journal indicated that building in the Fourth Ward had fallen off. The report speculated that this area which included the Rose Hill Addition, likely saw construction fall off due to the fact that this was the area favored by business men and that "in times like these they do not care to withdraw their capital from business to build residences."

To spur development in the addition and assure a return on their investment, several of Rose Hill's initial investors erected speculative houses for sale or rent. In 1885 Anna Livingston retained George Baldwin to design a pair of similar single-family houses at 1414 and 1418 Douglas Street which she retained for rental purposes. Anna together with her husband William also financed the construction of several single-family homes in the 1500 block of Douglas Street that were sold to employees of the Livingston's dry goods store. Mary Gary, a clerk for the W.H. Livingston Company, owned the house at 1511 Douglas Street from 1886 until 1894. J.J. Wilson, also a clerk for the Livingston Company, owned the house next door at 1515 Douglas Street built in 1885. Both houses were beyond the scale of houses that might be considered affordable for store clerks at the time. One of the speculative houses built by Anna Livingston was erected at 1711 Douglas Street. The house was constructed in 1888 and sold just two years later by Anna to Henry Taylor, an attorney, and his wife Rose. The Livingston's investment interests also included double houses built for rental purposes at 1621-23 Douglas Street and 312-14 18th Street.

Homebuilding continued slow three years after Rose Hill was platted. Only 12 houses had been erected by 1887. Sioux City's economy continued to be robust, however, and as the building season commenced in 1888 the Sioux City Journal projected "The best boom a city can have is a building boom. Sioux City has one in sight." The summer saw city contractors pave Summit Street between 14th and 18th streets with cedar blocks and set water mains in Douglas Street contractors between 14th and 18th streets.

The largest building project begun that year was the group of four double houses located in the 300 block of 14th Street (309-311, 315-317, 319-321, and 323-325 14th Street). Construction records indicate that P.P. Lean built the double houses. Both William Gordon, an active real estate developer, and Charles Breun, a local grocer wholesaler and Rose Hill resident, were involved in the development of these Rose Hill rental properties.

At the end of 1888 when the Sioux City Journal asked Ransom Chase, one of Rose Hill's proprietors, to comment on future growth in Sioux City, he was optimistic about Rose Hill's prospects. He predicted that the investment in paving, sewers, gas lines and water pipes in the area bounded by Jackson Street (several blocks east of Douglas Street), Summit Street, and Twenty-First Street would attract homebuilders in 1889. Construction of the cable line on Jackson Street and electrification of the streetcar line on Pierce Street would further spur development in the area. Chase described a gentleman casting an eye along the upper end of Pearl Street (Grandview Boulevard) exclaiming "Sioux City has got but one Rose hill; there is nothing to match it. Therefore, young man, I say keep your eye pretty steadily to the north." Whether Chase's account referred to a real life observer or simply an optimistic apparition, his unbridled confidence in Rose Hill could not be doubted.

Chase's optimism reflected other civic progress as well. The Peavey Grand Opera House opened in the summer of 1888 in the new Chamber of Commerce Block. The city's second annual Corn Palace, an attraction that drew thousands of visitors during its week-long run, impressed national journalists and gave Sioux City the nickname of Corn Palace City. The city's first cable car line was under construction and scheduled to open the following year along Jackson Street and the city's second bridge was planned to cross the Missouri River. Enthusiasm permeated the community. In the same newspaper edition that Ransom Chase predicted excellent prospects for Rose Hill, his fellow investor, James E. Booge took out an advertisement imploring Sioux City residents to buy land especially in Rose Hill.