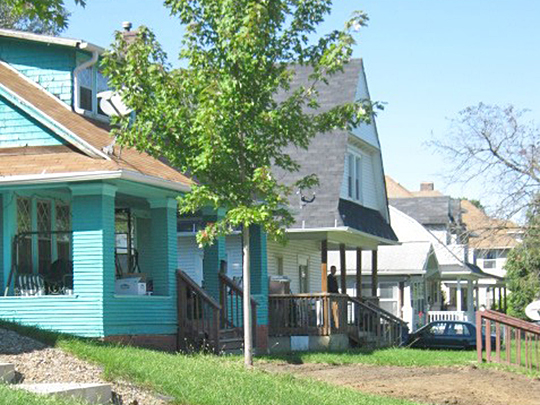 The Bates Park Historic District was listed on the National Register of Historic Places in 1996. Portions of the content of this web page were adapted from a copy of the original nomination document. [‡]

The Bates Park Historic District comprises a portion of Bates Addition, a large and irregularly platted tract of land in North Des Moines, now forming a part of the present day River Bend neighborhood. Except for a public park, which forms its focus, the district is exclusively residential.

The District is located two blocks east of 6th Avenue and two blocks west of 2nd Avenue. These avenues are four-lane arteries into downtown Des Moines from the north. Although the historic district is situated on a plateau, land to the east falls abruptly off into the floodplain of the Des Moines River, whose flow is situated about one-half mile from the historic district. The floodplain itself stretches all the way to 2nd Avenue. Land to the west of the historic district rises gently to 6th Avenue. The Bates Park Historic District and the surrounding area was built up as residential in the late Nineteenth and early Twentieth Centuries.

The park is situated on generally level land along a broad slope between 6th Avenue and the floodplain of the Des Moines River. Public thoroughfares provide hard edges on three sides (Clark Street on the north, 4th Street on the west, and Goode Street on the south). Heavy vegetation and an over-story canopy of trees provide an edge to the park on the east. The parkland itself is a grassy area. Although the park has a few modern improvements, such as a concrete block pavilion, wading pool, chain link fence, baseball backstop, and playground equipment, the overall visual impression of the park is that of open space. The boundaries of the park have changed over the years. Several additional city lots were added to the park between 1901 and 1920.

An intrinsic part of this parkland is the panoramic view it offers of the Des Moines River valley. When vegetation in the park is not in foliage, one can see across the valley to residences in the Capitol Park neighborhood, institutional buildings on Des Moines' east side, and the Iowa State Capitol Building on Capitol Hill.

The Bates Park Historic District illustrates the range of socio-economic classes lured by its many amenities and how real estate developers exploited their appeal. The District contains both moderately expensive and moderately inexpensive single-family dwellings. This juxtaposition illustrates the jowl-to-cheek intermingling of socio-economic classes characteristic of North Des Moines during the late Nineteenth and Twentieth Centuries. In this sense, the Bates Park Historic District is significant as a microcosm of community development in North Des Moines. Furthermore, the juxtaposition of these different property types illustrates how real estate developers intentionally exploited the suburban amenities mentioned above. While the more expensive houses look out over the parkland and picturesque river valley view, the more modest dwellings cluster south of the parkland, face one another, and lack that panorama.

A series of residences influenced by Colonial Revival design in the district calls attention to one of the most popular architectural tastes in North Des Moines during the late Nineteenth and early Twentieth Centuries. George E. Hallett, architect and real estate developer of Des Moines, or, possibly Oliver O. Smith, another contemporary architect in North Des Moines, may have designed them. The district also possesses a series of American Foursquare houses, whose designs are reduced to the essentials of that residential type. The clustering of these dwellings in the Bates Park Historic District comprises the largest concentration of that type in the River Bend neighborhood. The District calls attention to William Newton, contractor builder, and Nelson Royal, mortgage broker, both of Des Moines. Working together, these individuals erected at least eight speculative houses in the district Their activity provides evidence of how contractor-builders in Des Moines contributed to the city's residential growth.

The evolution of Bates Park—both the public parkland and the platted city lots—shows how complex real estate development in North Des Moines could be.

Curtis Bates (d. 1879) was a pioneer Des Moines lawyer and journalist. In 1854 the Democratic State Convention nominated him as Governor of Iowa. Bates lost that election to James Grimes, the Republican candidate. Bates also sought unsuccessfully to become judge of the District Court in Central Iowa. He subsequently disposed of his interest in a local Des Moines newspaper and retired from his law practice, devoting his time thereafter to managing his extensive real estate interests.

The public acquisition of Bates Park (the public parkland) illustrates the difficulties surrounding public acquisition of parklands in Des Moines during the Victorian era. It required 17 years before this tract of land-traditionally used as such for an even longer period by the public—came into public ownership. During Judge Bates' lifetime, the tract of land now known as Bates Park Addition remained unplatted.

Following the death of Judge Bates, Sophia E. Bates, his widow, took steps to develop the tract. In 1883, for example, she had the entire tract platted as Bates Addition. At this time, Mrs. Bates also designated a tract measuring 140' x 265' as a public park, "in accordance with the evident intent of the Judge." According to a local historian, she also conveyed the tide to this tract to the Board of Park Commissioners, instructing that it be named Bates Park in commemoration of her husband.

Prior to the 1890s, boards of park commissioners were not enabled under Iowa law to hold title to real estate. Perhaps this is the reason Bates Park did not become public property. Such appears to be the case, for, in 1892 when the Park Board solicited proposals from landowners to buy land for parks, Mrs. Bates offered to sell Bates Park to the City. The Park Board, however, declined to purchase it at that time, opting instead to buy land that became such parks as Greenwood and Union.

Finally, in 1900 Mrs. Bates donated and the City accepted six city lots at the park site. The city also purchased four lots to the south, Numbers 50, 51, 76, and 77. (The private sector subsequently acquired the latter four lots from the City, and they were developed for residential purposes.)

On August 14,1900, the North Des Moines Improvement Association celebrated the opening of Bates Park. The program included an address by Sophia E. Bates, a band concert, and fireworks. This celebration culminated 17 years of effort to acquire the property for the public. In his self-important way, Johnson Brigham, Iowa State Librarian and resident of North Des Moines, characterized this event as "one of the minor events in the history of the public parks in Des Moines."

In conclusion, the history of Bates Park provides evidence about the complexity surrounding park acquisitions in Des Moines during the Victorian era. Enabling legislation was required before boards of park commissioners could hold title to real estate in Iowa. Prior to this, even the gift of Bates Park to the public was prohibited. Additional legislation was also required for park boards to levy taxes for park acquisitions. When such legislation was enacted, the City of Des Moines launched a major program of park acquisition, but selection criteria placed other tracts in more favorable lights than the Bates tract. Sophia E. Bates must have suffered mixed emotions during this period. Her offer to sell the land to the City in 1892 is understandable because the City was soliciting proposals for purchase at that time. Although the city declined to purchase this tract for understandable reasons, her subsequent gift, eight years later, and the City's acceptance of it, witnesses to Bates' enduring sense of civic goodwill.

The Bates Addition plat calls attention to laissez faire practices in Victorian real estate development. It can readily be seen from the plat's design that its layout lacked conformity with adjacent plats already established. For example, Orchard Street between 4th and 5th Street was wider to the west of 4th Street than to the east. Greater irregularity occurred because 4th Street jogged 60' at Orchard Street. Although horse drawn vehicles might have navigated such jogs with minor difficulty, motor driven vehicles require a great turning radius, so that such irregularities pose serious questions. In any event, the lack of Bates Addition plat's conformity with established plats (which themselves probably lacked conformity with earlier ones) shows how private developers could operate in the late Nineteenth Century prior to the advent of municipal regulations.

The improvement of Bates Addition required a considerable period of time. Although the construction of houses respected a uniform setback from the street, this construction was neither uniform in terms of architectural style nor size of building. By circa 1920, however, most construction had ceased in the area, and most lots were improved with structures of some kind.

Into the 1890s, the area surrounding the parkland on the west and south was unimproved. Sometime in the mid-1890s, a series of six houses, located on lots 38 through 43, in Bates Addition to the City of Des Moines, were erected directly west of the park. Exhibiting architect-design characteristics, these houses show the influence of Colonial Revival and Classical Revival tastes. They can be considered solid middle-class houses in respect to their cost and appeal.