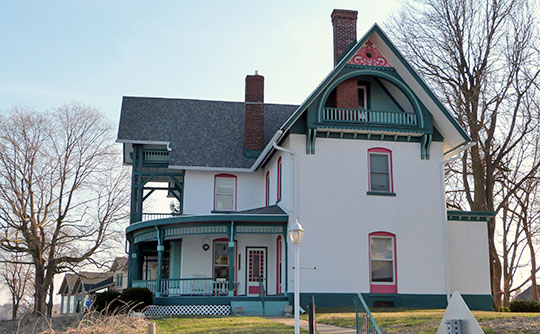 Burlington is located in southeast Iowa on the steep cliffs and valley plain of the Mississippi River. Part of Pere Jacques Marquette and Louis Joliet's exploration in 1673, Lt. Zebulon Pike landed at what is now Crapo Park in 1805. The land eventually became part of the Louisiana Purchase. At the end of the Black Hawk War in 1833, residents named the hamlet "Burlington," after trader John Gray's Vermont home.

The City was chartered by Congress in 1836 as the seat of one of two counties of the Iowa District in the Wisconsin Territory, and remained the capital when the Iowa Territory was established in 1838. Burlington's population at this time was approximately 1200. Burlington remained a small trading hub until 1868 when the Chicago, Burlington, & Quincy railroad bridge was completed. MacArthur Bridge was constructed in 1917, to carry automobile traffic across the Mississippi River.

Since 1868, the greater Burlington area has grown into the manufacturing center of southeast Iowa, with over 20 percent of its industry in manufacturing in 2010.

While early establishment in manufacturing brought impressive increases in the number of residents, Burlington's population has been steadily decreasing since 1960, about 20 percent over the last 50 years. The population in 2010 was 25,663.