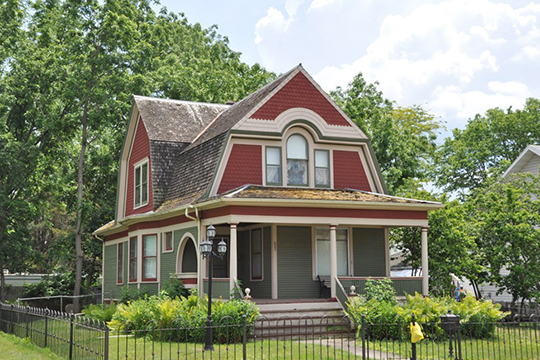 The first people in the area now known as La Porte City were believed to be Native Americans who did not settle but rather migrated through the area. The first outside settlers to frequent the area are believed to have arrived around 1844, mostly comprised of hunters and trappers.

The first known settler to actually live within the area now known as La Porte City was James Hamer, who settled in the area in 1853. A man by the name of John A. Dees platted a town site on the north side of the creek under the name of Ottawa, and soon afterwards tried to sell the site to a Dr. Jesse Wasson of Vinton, Iowa. Dr. Wasson came to the site and decided that the south side of the creek would provide a better location for a town. Dr. Wasson and his partner, Joel W. Catlin both moved to the area in 1855 and shortly thereafter built a storeroom. Dr. Wasson suggested the name La Porte for the new town after La Porte, Indiana, where he had previously lived. Wesley Whipple made the first official plat of the town on June 5th, 1855. The plat was filed for record on July 16th, 1855.

It was not until October 7th, 1870 that George Hayzlett, Jasper Parks, and thirty-nine other people presented a petition to the Circuit Court asking for the official incorporation of La Porte City. An election was held on January 31st, 1871, which resulted in favor of incorporation. On February 11th, 1871 the town of La Porte City, Iowa was duly incorporated. The first elections were held shortly thereafter with R.J. McQuilkin being named the first Mayor of the community.

Since that date the City of La Porte City has continued to grow and evolve into the town that it is today. The history of hazards has been significant. New development trends seem to be towards the north and west of the community, with the newest residential subdivisions occurring in those areas.