Photo: The Coral Gables House (also known as the Merrick House or Merrick Manor), ca. 1925, 907 Coral Way, Coral Gables, FL. This house was the home of George F. Merrick, the founder of Coral Gables. Listed on the National Register of Historic Places in 1973. Photographed by User:Sebas Torrente (own work), 2010, [cc-by-3.0 (creativecommons.org/licenses/by/3.0)], via Wikimedia Commons, accessed October, 2012. 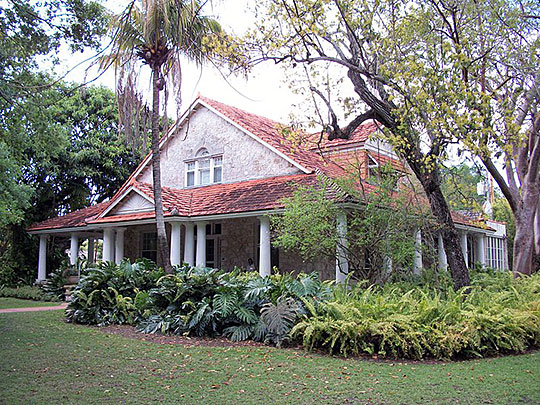 The beginnings of Coral Gables date back to the years between 1911 and 1921 when George Merrick acquired much of the land in and around the original 160 acre family citrus plantation. In 1921, with 1,600 acres and $500,000 in cash, an efficient sales organization, a personal knowledge of marketing land, and, most important, a developed city plan, Merrick was ready to begin selling. The streets and plazas were laid out in 1921 and in November of 1921, the first lot sales began. Merrick brought together the talents of expert architects, city planners, artists and engineers who designed the earliest notable Coral Gables landmarks.

Edward E. "Doc" Dammers, who used medicine show tactics from a mule-drawn cart to sell land was the City's first mayor. In the early years, Dammers was a selling agent for George Merrick and Coral Gables. Prior to this he sold lots for Carl Fisher in the development of Miami Beach. Dammers had a charismatic manner that was most effective in selling land and if that was not persuasive enough he gave gifts like sets of dishes to those who bought lots.