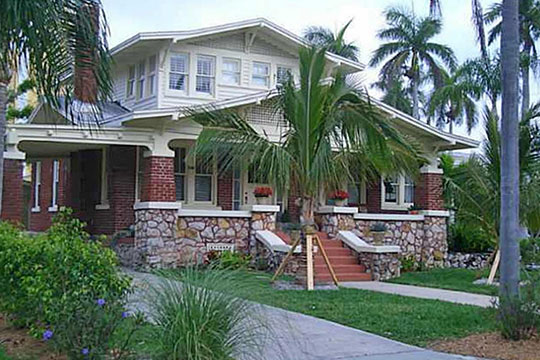 The Dean Park Historic Residential District was listed on the National Register of Historic Places in 2013. Portions of the content on this web page were adapted from a copy of the original nomination document. [‡]

The Dean Park Historic Residential District was founded by John Morgan Dean in 1912. The subdivision has maintained its level of historic physical integrity and the street layout which follows a modified grid pattern that has not changed since it was originally platted. Lush vegetation still lines the streets and fills the yards. Modern development has not encroached on this area and the context is still very much as it was in the early 1920s. The homes were built for Fort Myers' first permanent residents and winter visitors. The district's period of significance extends from ca. 1915 to 1928, and the houses represent the architectural tastes during the Florida Real Estate Boom of the 1920s. The architecture of Dean Park has maintained its level of integrity and is an excellent example of early 20th Century Revivals and Craftsman style residences.

Fort Myers saw its first planned residential real estate development completed in 1914. The developer was John Morgan Dean, a winter visitor from Providence, Rhode Island. Dean was the founder of the John M. Dean Furniture Company and the Household Furniture Company, two successful enterprises. Dean had been coming to Fort Myers since 1899 when he arrived with a friend, Frank L. Budlong to go hunting. By 1900, Dean had moved to Fort Myers and began acquiring large parcels of land in Lee County. In 1901, Dean purchased 38 acres of low lying land along Billy's Creek for $8,500, from Peck Brothers of Chicago. The area required significant fill. He did not start development work at once since he realized that real estate prices in Fort Myers had not reached a high enough level to justify expensive improvements. The development began in 1912. Needing significant fill, Dean, purchased a dredge and filled the area with 150,000 cubic yards of spoil from the Caloosahatchee. By the tum of the century, real estate prices started to rise. The development work was completed by 1914 and the lots were ready for sale. By 1915, some homes had already been constructed in Dean's Subdivision. This exclusive area became known as "Dean Park" and was home to many of Fort Myers' prominent families of the time.

John M. Dean was also the first developer to set restrictive covenants for the homes to be built in the subdivision. Setting a minimum requirement of $2,000 per home guaranteed that only up-scale quality homes would be built. Partially as a result of the intense, planned development and strict building requirements such as setbacks and minimum square footage, it attracted the wealthy residents of Fort Myers. This became a standard for development policies throughout southwest Florida and is evident today in planned communities. The homes in this small intimate neighborhood range in architectural style from Arts & Crafts Craftsman Bungalows, Mediterranean, Spanish, Dutch Colonial and Tudor. In compliance with the strict building restrictions insisted upon by the Dean Construction Company, the homes were built no less than 35 feet from the street and at a minimum building cost of $4,000. Carriage houses and cottages were constructed to the rear of the main residences to encourage winter visitors from the north and service lanes provided for off-street parking and pedestrian walkways.

In the deed covenants was the requirement that each home cost a minimum of $2,000, which prompted many prominent business leaders of the time to move to the neighborhood. The first two streets to be developed were appropriately named Providence Street and Rhode Island Avenue to acknowledge Dean's home town. During the height of the real estate boom, Rhode Island Avenue was commonly known as "Millionaire's Row." Though platted as Dean's Subdivision, the neighborhood was initially known as Hyde Park, only later to become known as Dean Park.

In the 1920s, Dean Park was in its heyday. But the neighborhood, like many other areas in Fort Myers, fell on hard times after the depression and began to decline in value. High crime moved into the area and the homes were in the beginning stages of disrepair. The concerned neighbors soon formed a committed headed by Jeanie Gibson and Dinesh Sharma. Their goal was to revitalize the neighborhood and prevent it from further deterioration. They were successful and on April 7, 1997, Dean Park was granted local historic district status and continues to be well maintained.