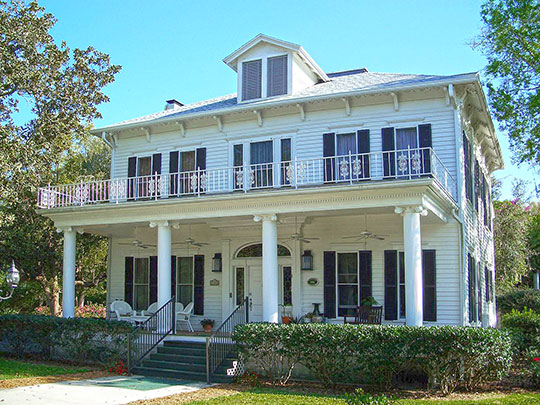 Eustis, on the east shore of Lake Eustis, a tourist town with pleasing houses and well-kept streets, lies at the apex of the 'Golden Triangle' and reflects the prosperity of a rich agricultural section, with citrus and watermelons as the chief crops. Sand pumped from Lake Eustis is used throughout the State for construction purposes.

Known successively as Highlands and Pendryville, the town was later named for Lake Eustis, itself named about 1828 for General Abram Eustis, prominent in the Seminole War, whose forces had a skirmish with the Indians on the south shore of the lake. In 1876, A.S. Pendry homesteaded land here and set out a citrus grove. In the fall of 1877 he opened the Oklawaha Hotel; the post office established in the hotel carried the sign 'Pendryville.' Before the advent of the railroads, the town was a busy port for steamers plying Lakes Eustis, Dora, Griffin, and Harris.

The Lake County Country Club's 18-hole golf course (greens fee $1) is the scene of many winter tournaments. Social activities and amusements for winter visitors center at the Tourist Club and park on the lake front.

An annual trapshooters meet, the Winter Vandalia, is sponsored each February by the Eustis Gun Club under the supervision of the Amateur Trapshooting Association. Adopting the name of a shoot held for many years at Vandalia, Ohio, the Eustis meet competes for popularity with many oddly named rivals; among them the Daytona Beach Baby Grand, and the Jacksonville Gun Club's Great Southern. Amateur trapshooters from all parts of the United States enter the Eustis tournament to compete for the trophies offered: the Orange Blossom Handicap, the Orange Blossom Championship, and the Orange Blossom Consolation.