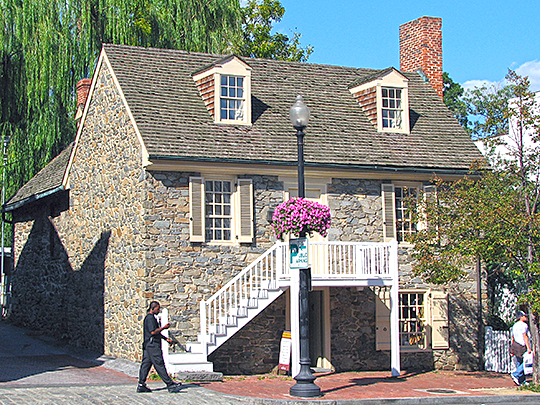 The Georgetown Historic District was listed in the National Register of Historic Places in 1967, an automatic designation triggered by its designation as a National Historic Landmark. Portions of the content on this web page were adapted from a copy of a 2003 amended nomination document. [‡] .

The period of significance for the Georgetown Historic Districts extends from 1751, when the original 60-acre port town was established by an Act of the Maryland Assembly to 1950 (inclusive) when Congress passed Public Law 808. Known as the Old Georgetown Act, this law set the boundaries of the Georgetown Historic District and provided for the review of all plans for the construction, alteration, reconstruction and/or razing of any building within its limits.

Established in 1751 and named in honor of King George II, "George Towne" on the Potomac River encompassed George Gordon's tobacco house and inspection station, a sprinkling of houses, shops, a tavern and ferry landing. During the next half century, Georgetown flourished as a tobacco port town and shipping center, with a profitable European and Caribbean trade. The first buildings to be constructed in Georgetown were related to the tobacco trade, including the wood and log tobacco warehouses and merchant stores, and the houses, inns and taverns of people working the tobacco trade. Other than the street plan oriented toward the harbor and portions of buildings incorporated into later construction, little remains of colonial Georgetown. The earliest known extant building in Georgetown is the "Old Stone House" at 3049 M Street, built ca. 1765 as a residence and cabinetmaker's shop. Other pre-Revolutionary construction may exist encased in or behind later buildings, such as in the frame "back buildings" of the Federal-era "Mackall Square" at 1633 29th Street (built 1820). Recent archaeological studies have identified other 18th-century resources, including the remains of several warehouses at 34th and M Streets, associated with John Mason.

In 1791, Georgetown became part of the ten-square-mile federal city. Over the course of the next decade, Georgetown prospered. Local fortunes were made in shipping and real estate, and development of the town began to spread beyond the banks of the river. While hotels, taverns, banks and other commercial buildings were clustered along M Street and the waterfront area, large mansions and smaller, speculative housing began to be constructed above the harbor.

By 1814, Georgetown had evolved from a small tobacco inspection station clustered around the harbor, to a fully envisioned town, platted virtually in its entirety from the water to north of R Street. In addition to the residential, commercial and emerging industrial buildings that were vital to the town's economy, Georgetown had grown to include other supporting buildings, such as a large variety of religious, educational, and cultural buildings. The German Lutheran Church, the Church of England, the Roman Catholic Church, the German Presbyterian Church, the new Church of England, and the Presbyterian Church all had buildings in Georgetown. One of the oldest congregations was originally founded as the Bridge Street Presbyterian Church in 1782, but was reorganized as St. John's Episcopal Church in 1795. St. John's present church building, designed by architect William Thornton at 3240 O Street, was erected in 1809. Old Trinity Church at 3515 N Street, built ca. 1794, is considered the oldest Catholic Church in D.C.; the Mt. Zion United Methodist Church, originally founded in 1816 and built in 1842 at 1334 29th Street, survives as Washington's oldest African-American congregation. Several other African-American churches emerged to accommodate Georgetown's sizable African-American population, both free and enslaved, who worked in a variety of skilled and unskilled jobs, contributing to the overall economic prosperity of the district.

During the early and mid-Victorian period, [1830-1869] Georgetown grew extensively, leaving an indelible mark on the built environment of the former port town. According to the 1993 survey, 175 buildings within the historic district date to this period. Much of this growth occurred along the waterfront as industrial processing and commercial opportunities, spurred by the C&O Canal, continued apace. The Bomford Mill at 1000 Potomac Street (1845-47), and the Duvall Foundry at 1040-50 30th Street (1856), both incorporated into contemporary office complexes, represent the emergence and growth of the milling and iron work industry of mid 19th-century Georgetown.

In 1871 [late Victorian period, 1870-1899] , the Board of Public Works, under the direction of Alexander ("Boss") Shepherd, consolidated the governments of Washington City, Washington County, and Georgetown. Georgetown's independent charter was revoked and Congress created one territorial government for the city of Washington. With the establishment of the territorial government, Shepherd and his Board of Public Works began implementation of a massive, city-wide program of public improvements that included the laying and grading of streets, the laying of sewer, water and gas lines and the development of street furniture and landscaping, including trees. The results of the 1993 architectural survey of the historic district indicate that Georgetown benefited significantly from the development of this infrastructure, as 985 of the district's 3,033 buildings date from this 29-year period.

Early 20th Century Georgetown (1900-1949) — despite the long-held belief that Georgetown's built environment dates predominantly from the 18th and early 19th centuries, the 1993 survey of the historic district revealed that 88 percent of the present building stock of Georgetown was constructed after 1870. While 984 of the district's 3,033 buildings date from the 1870-1899 period as noted above, 876 range in date from 1900 to 1950 (inclusive).

In the first decade of the 20th century, Georgetown continued to expand its residential building stock through the construction of row houses, as well as through the introduction of flats and apartment houses. Beginning in the 1890s, several large Victorian houses, such as the Dodge House at 30th and Q Streets, were converted into flats, while the first purpose-built apartment houses were erected after the turn of the 20th century. These early apartment buildings were generally small-scaled buildings designed to resemble row houses that fit neatly into the existing streetscape (i.e. the row of "flats" designed by B. Stanley Simmons and erected in 1909 at 3403-23 M Street). Dumbarton Court, a large, four-story, 35-unit Mediterranean-inspired apartment house designed and built in 1909 at 1657 31st Street by architect George S. Cooper provides a notable early exception. Beginning in the 1920s and culminating in 1941 with the expansive Carlyn (now Gateway Georgetown) at 2500 Q Street, Georgetown apartment buildings grew larger and denser, following the local, citywide trend in apartment building design that accommodated the growing government workforce and population of Washington. The expansive Kew Gardens at 2700 Q Street and built 1922 by developer Harry Kite illustrates the growing acceptance and popularity of the larger apartment building type.