Photo: Row Houses in the Foggy Bottom Historic District, Washington, D.C. The Historic District was listed on the National Register of Historic Places in 1987. Photographed by User:Smallbones (own work), 2012, [cc-by-1.0 (creativecommons.org/publicdomain/zero/1.0/deed.en)], via Wikimedia Commons, accessed December, 2015. 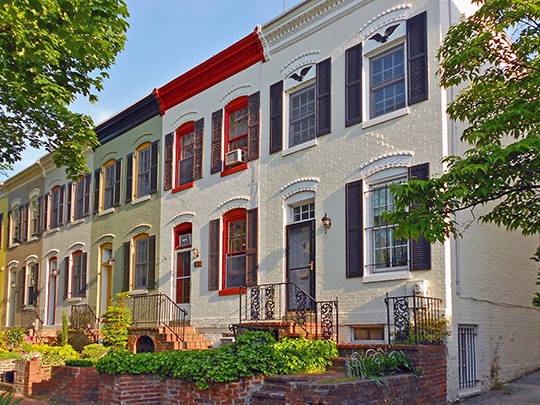 The Foggy Bottom Historic District was listed on the National Register of Historic Places in 1987. Portions of the content of this web page were adapted from a copy of the original nomination document.

The area popularly called Foggy Bottom is generally considered to fall between 17th Street on the east, Georgetown on the west, the Potomac River on the south, and Pennsylvania Avenue on the north. Historically, this area was divided into two sections, with 23rd Street separating an upper-income neighborhood to the east from the working class/industrial neighborhood to the west. According to Elmer Kauser, historian of George Washington University, writing in Bricks Without Straw, "The name was never an official one, indicating fixed metes and bounds. For decades it was one of those popular terms of denigration which traditionally fix themselves to an area, like Swampoodle, Frog Island, Herring Hill ... its great landmarks were two breweries, a large coal yard, extensive stables, the gas works, and a famous saloon. Time works a strange legerdemain. The development of a parkway along the Potomac, the contemporary craze for restoration of old dwellings, and the construction of great memorials, monumental government structures, high-rise office buildings, and luxurious apartments have given Foggy bottom a distinct flair and its name a place in the literature of politics, society and the arts."

Specifically, this district is significant for: 1) its association with Washington's early working class; 2) its geographic and sociological relationship with one of Washington's early industrial areas; 3) the fact that it remains one of the few neighborhoods associated with European immigrants in a city noted for its relative absence of European-American communities; and 4) the value of its architecture as a guide to the lives of its residents.

Those responsible for building the district's houses included well-known architects such as A.H. Beers and Norman Grimm and prominent developers such as Harry Kite and James Grant. But the men and women who gave Foggy Bottom its distinctive character were the carpenters, the bricklayers, the builders, and the nineteenth and early twentieth century residents who helped shape Foggy Bottom with their dreams for a better life in America. They were men like Peter McCartney, an Irish immigrant who began as a carpenter and soon established his own successful contracting business. McCartney's name is associated with more buildings in Foggy Bottom than any other person. It is people like Pleasant Hough, a widow who built her own home, a modest house, but one that reflected her economic self-sufficiency. Or James Scanlan, another Irish immigrant, who rose from a job as bartender to the ownership of his own saloon, and who went on to build houses in Foggy Bottom. The people who lived in Foggy Bottom, whether in row houses along the main streets or in alley dwellings, spent most of their lives here, developing a "sleepy backwater into the neighborhood that survives today.

This neighborhood housed the workers from such nearby industries as Godey's lime kilns, the Washington Gas and Light Company, the glass works, the Abner/Drury and the Christian Heurich breweries, and Cranford's Paving Company. The growth of industrial activity in the area and an expanding ethnic population kept Foggy Bottom from sharing in the benefits of Governor Alexander ("Boss") Shepherd's late nineteenth century public works program, which was directed primarily within Northwest Washington. As improved public transportation encouraged those who could afford it to move from the sleepy backwater that was Foggy Bottom, the population of the area came to consist primarily of the poor immigrants who lived close to their work. These people, mostly of German and Irish extraction, formed cohesive communities within Foggy Bottom. The Germans generally worked in the breweries, while the Irish tended to work for the Washington Gas and Light Company.

Hired as laborers, they worked long and hard under unpleasant conditions that were made worse by the soot, steam and odor of the industries in the area. Foggy Bottom was described by historian Kayser in the following words: "In the old days, there had been an appropriateness to the name, though Foggy Bottom has no official place in geographical nomenclature. It was bottom land and much of its lower fringe was swampy. The fogs which settled over the river bank were amplified by the smog from the gas works which emitted dirt-laden and malodorous clouds of smoke, day and night, touched up with violent spurts of flame that lit up the vicinity with an eerie glow."

Foggy Bottom was home to some of the very poorest residents of the city, but it was also a place where, for many, the modest dream of owning a simple home was realized. The very unpleasantness which left Foggy Bottom a forgotten corner of the city enabled it to become a source of opportunity for its working class immigrant residents. The area's poor environment and its lack of popularity kept land values low and made home ownership a possibility for them.

A Rare Example of a Washington Ethnic Neighborhood

Historically, Washington was not a city with a multiplicity of strong ethnic communities. Many reasons have been put forward for this phenomenon. The most likely is that the absence of an underlying industrial economy altered the more typical patterns of sociological development found in other American cities. Foggy Bottom's proximity to Washington's small industrial area provides the basis for its ethnic associations. The residents of the area maintained strong internal ties and formed separate religious and social institutions, many of which still exist today. The Irish community had both a baseball team and a football team, the Former called the Emerald A.C. and the latter the Irish Eleven, and the West End Hibernian Society had been established by the 1880's. Susan Sherwood, in her study, Foggy Bottom 1800-1975, relates a conversation with an older resident who remembered that the neighborhood was entirely German and Irish and the Germans only traded with the Germans and the Irish with the Irish."

The Architecture as Representative of the Lifestyle of the Residents

The buildings that comprise this historic district are the legacy of the German and Irish communities that coexisted in Foggy Bottom for many years. The extant residential architecture illustrates the physical development of a working class community in its architectural vocabulary, its craftsmanship, and its building types. The houses, which are modest in scale and size, form a pleasing neighborhood of varied types, forms, and styles. Such urban vernacular housing represents the ethnic background, traditions, and skills of its residents. The area's developers, builders and architects were often successful members of the community, responding to their neighbors' housing needs through their work.

The houses were primarily constructed in the period from the late 1870's through the 1910's. The extant buildings represent stages of the area's development that correspond to the changing economic situation in Foggy Bottom. From individually constructed houses built for their owners, to two or three attached houses "built by speculators, to low cost row houses erected by professional developers to meet housing demands, this area maintained a cohesiveness of scale and building type. The neighborhood retained an ethnic base as buildings were erected to suit the needs of its residents and their ability to pay.

The alley dwellings of the District of Columbia were a form of workers' housing prevalent throughout the city. Unique to Washington, these substandard dwellings were a major source of housing from the late 19th century to the 1930's. James Borchert's in-depth study, Alley Life in Washington, presents substantial evidence that these alleys were pockets of rural folk culture within the heart of the city. As such, a rich subculture developed with significant historical and sociological implications.

The emergence of alleys as dwelling areas was due to the urban housing shortage in the middle of the nineteenth century. The first documented alley structures in Washington date back to approximately 1850. This initial phase of alley building consisted primarily of flimsy shanties and sheds, offering the barest protection. The great influx of ex-slaves, soldiers and vagrants following the Civil War further exacerbated the housing problem and provided a strong stimulus for alley development. In the period from 1870-1892, substantial frame and brick row houses began to appear in large numbers and close-knit alley communities comprised of unskilled workers and vagrants came into being.

Within the bounds of the historic district are two such alleys: Snow's Court and Hughes Mews. Little is known of Hughes Mews. Snow's Court, one of the first alleys in Washington, was named for C.A. Snow, publisher of the National Intelligencer. Snow built a greenhouse and four frame dwellings during the 1850's in the square's interior. The frame dwellings were among the first of their kind to appear in an alley and served as forerunners for the frame row houses of the 1870s. During the Civil War, Snow's houses were used as army barracks; following the war, Snow's alley developed at the same rapid rate as other alleys. A 1938 study indicated a very high rate of resident stability, with more than half having lived in the alley for over flue years.

In 1892, a prohibition on the construction of alley dwellings checked their growth. The concern with the sociological and health-related problems posed by the alley dwellings led to a wave of demolitions during the first two decades of the 20th century. A second wave of demolitions occurred in the 1930's and 1940's. The movement to remove these "mini-ghettos" from the more affluent neighborhoods of Washington was largely successful and they remain in only a few areas of the city.

The Foggy Bottom Historic District is, as an area, representative of an important part of Washington's development. It is significant for its association with Washington's industrial history and the immigrant lifestyle; for its important collection of late nineteenth century worker housing; and for the information it yields on the development of urban vernacular architecture.