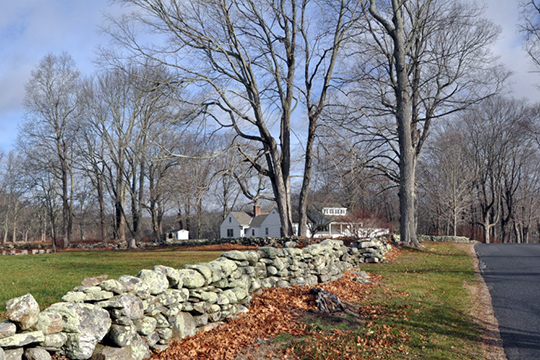 The Bush Hill Historic District was listed on the National Register of Historic Places in 1987. Portions of the content on this web page were adapted from a copy of the original nomination document. [‡]

Bush Hill Historic District is a group of 20 houses, most dating from the 18th or early 19th century, with 4 associated barns and 1 carriage house, located in the extreme northwest corner of Brooklyn, Connecticut. The houses are ranged along two broad ridges, one on Wolf Den Road (Bush Hill) and another on Route 169 or Pomfret Road, the summits of which are joined by Bush Hill Road, resulting in an H-shaped settlement (see map). The land in this vicinity is largely open and in agricultural use, with extensive fields of silage corn and hay. Along the roads are tall maples and stone walls, with other walls marking out field lines. The area between the ridges (most of which is not included in the district) and the east end of Bush Hill Road are now overgrown with hardwood forest. Except for one bed-and-breakfast, the houses are still used as private residences, though a restaurant and an art gallery now occupy two of the large old barns in the district.

The Bush Hill Historic District gets its character from the 18th-century vernacular houses which make up a large part of the buildings. These typically are 2-1/2 stories high, with the ridge line of their gable roofs set parallel to the road. They have symmetrical five-bay facades with entrances in the center. A large brick chimney rises from the center of most of the houses, and the exteriors are covered with clapboards. One house is of lean-to form, and one is a small, gambrel-roofed, 1-1/2-story cottage. Three houses have two interior end chimneys instead of a central stack, though in one case patching of the roof sheathing indicates this is a later modification. One house was modified c.1800 with a hip roof, and one is a south-facing house with an asymmetrical 3-bay facade and the interior chimney near one end. The historic houses are all sited quite close to the road.

The interiors contain a large amount of original material, including walls of raised paneling, wide-board floors, beaded post-and-beam casings, and stairways with turned balusters and scroll appliques. All the contributing houses are of post-and-beam construction, many with the summer-beam floor system and flared posts associated with a mid-18th century date.

The houses are widely spaced apart, with large yards and intervening fields and woods. The five old barns or carriage houses appear to date from the late 19th century.

The houses retain a great deal of their historic appearance. The clapboards, small-pane sash, and brick chimneys are in many if not most cases replacements in kind for similar original materials. Three of the houses have later Federal or Greek Revival Classical entry treatments, and one has a Colonial Revival portico appended to its original period entrance.

Of the 25 major buildings in the Bush Hill Historic District (20 houses, 4 barns, and 1 carriage house), 15 or 60% contribute to the character of the district. The noncontributing buildings are modern houses interspersed among the historic houses. The visual impact of most of the 10 noncontributing structures is lessened by their setback far from the road and by intervening trees.

The boundary of the Bush Hill Historic District includes all nearby historic houses and generally follows either property lines or tree lines defining open fields. At the northeast edge, the district abuts Putnam Farm, a property with an 18th-century house which is already listed on the National Register of Historic Places.

Bush Hill Historic District is significant because of its unusually high concentration of well-preserved 18th-century farmhouses and because it retains the open fields, stone walls, and tree-lined roads which provide an appropriate setting for the houses, one which recalls the area's historical development as an outlying farming district. The Bush Hill Historic District's houses exemplify rural 18th-century Connecticut domestic architecture: they embody the distinctive characteristics of that period's form and method of construction. Typical 18th-century features — post-and-beam framing, central chimneys, five-bay facades, clapboarded exteriors, gable roofs, interior paneling — are well-represented in the district, as are variants such as the gambrel roof, the lean-to, and the "half-house" form with rooms on only one side of the chimney. Changes over time are evident not only in framing differences among the houses but also in the appearance of the two-chimney, center-hall plan. The distribution of the houses throughout the Bush Hill Historic District is also significant because it illustrates the historical development of settlement patterns in Connecticut. The wide spacing of houses with nearby fields and woodlots represents the most common Connecticut settlement pattern of the 18th century, when most families lived on farms in outlying areas such as Bush Hill.

The Bush Hill Historic District's old houses are typical of Connecticut's vernacular architecture of the 18th century in their siting, form, materials, and method of construction. The orientation of the house with the ridge line parallel to the road was the most common arrangement, with a south-facing orientation a distant second in frequency, though probably more common in eastern Connecticut than in most regions of the state. The symmetrical five-bay, center-entry facade was the dominant form, as it is in the district. Eighteenth-century Connecticut houses, such as those in the district, made use of available wood resources, including oak or chestnut post-and-beam framing, clapboarded exteriors, wide-board flooring, and interior wall coverings of feather-edged wainscot or raised paneling in pine. The generally plain appearance of the houses is evident in the most common entrance treatment, a transomed doorway surrounded by a series of molded boards. Another typical 18th-century feature found in several of the district's houses is the winding stairway with turned balusters and applied scrolls.

The Bush Hill Historic District's houses utilize the post-and-beam framing of the 18th century, visible on the interior as corner posts and beams covered by beaded casings. The houses demonstrate a variation in heaviness of framing members usually associated with a chronological progression toward lighter house-frames. Summers (beams running down the middle of rooms to support floor joists) are found in many of the houses, with the larger ones in houses with pronounced splay, or shoulders, on the corner posts. Other houses have smaller summers detectable only by parallel cracks in the ceiling plaster, and some have dispensed with them in favor of full-length joists. Houses without summers also have relatively small corner posts with no splay at the top. At least two houses are substantially different in the framing of the north and south halves; they were probably enlarged at a date subsequent to their original erection.

The trend toward the two-chimney, center-hall plan is evident in two houses modified from their original form, and in another house, built c.1815. The early 19th-century taste for Classical ornament can be seen in a number of houses which had entrance and corner pilasters added, along with Federal type mantels and other modifications. These alterations have significance in their own right as reflections of changing architectural ideas.

The architectural significance of the Bush Hill Historic District's houses is enhanced by their generally high state of integrity. Unlike many areas of old houses in Connecticut, the Bush Hill Historic District is characterized by clapboards, small-pane sash, and appropriately sized brick chimneys, and there are no old houses which have been sided with modern composition materials.

Listings on the State Register of Historic Places indicate that Bush Hill accounts for a large proportion of the town's historic buildings outside of the immediate town center, and may be the only extensive contiguous group of 18th-century houses left in Brooklyn.

At the beginning of the 18th century what became the town of Brooklyn was not within the bounds of any organized town, but was part of a large tract of land in eastern Connecticut claimed by Major John Fitch. In 1703 Richard Adams of Preston bought a large piece of land from Fitch, including what would become Brooklyn, and then sold off portions to others. In 1714 the area was split between the towns of Canterbury to the south and Pomfret to the north. Settlement proceeded slowly, in part because parcels of hundreds or thousands of acres were held by absentee landowners. By 1723 there were enough English people in the area that became Brooklyn that a train band or militia unit was formed. And in 1728, 32 families petitioned to become a separate church, a request granted in 1731, when Brooklyn parish was set up within the town of Pomfret. Not until 1786 did Brooklyn become an independent town.

English settlement of Brooklyn, as in most areas in Connecticut settled in the 18th century, occurred mostly along broad upland ridges like those in the district, which offered good drainage and protection from flooding. Farms of 50 to 150 acres were most common, with much of the cleared acreage adjacent to and across the road from the farmer's house. Houses were consequently spaced widely apart, grouped in a linear pattern along the high ground. In many areas the grouping of houses reflected settlement by related families.

Today this pattern is no longer evident in most areas of the state. The village centers popularly associated with New England towns are primarily an early 19th-century phenomenon, the product of turnpikes, small-scale manufacture, commerce, and market-oriented agriculture. Other areas of Connecticut's colonial countryside have been built over with industrial cities or 20th-century subdivisions. Bush Hill, however, retains many of the features of the 18th-century landscape. Although no one would claim the area is unchanged, the many well-preserved old houses, the wide spaces separating them, the farmland, the stone walls, and the other landscape features act together to suggest the 18th-century appearance of Brooklyn's countryside.

In the 18th century, most of the farms in the Bush Hill Historic District were owned by members of the Putnam and Williams families. Israel Putnam, Connecticut's Revolutionary War hero, lived in the center of Brooklyn but his sons maintained his original farmland along Spaulding and Pomfret roads. Although most of the area's farms were not exceptionally large, some of the 18th-century owners were sufficiently prosperous to be called "Esquire" in the legal records, such as Roger W. Williams or Joseph Scarborough. The latter's house also is said to have been used as a tavern, a local tradition consistent with its location on Pomfret Road, the major thoroughfare leading north from Canterbury to Pomfret and Woodstock; it was improved in the early 19th century as the Norwich and Woodstock Turnpike. Long-established families such as the Williamses continued to occupy the area into the 19th century, and were joined by new families such as the Dyers from Rhode Island. Orchards and dairy farming eventually replaced the generalized, largely subsistence farming of the earlier period. Railroads, factories, and urban growth entirely bypassed this part of Brooklyn, so that until the building of modern houses in the last 20 years, Bush Hill remained relatively unchanged from its early 19th-century appearance.