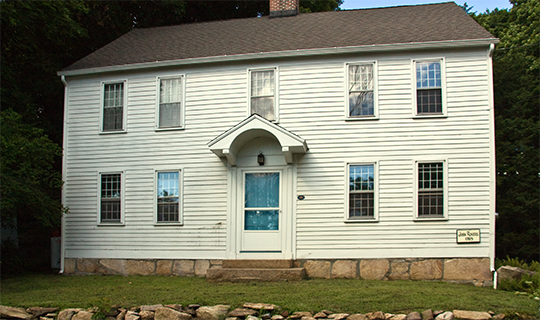 The John Rogers House was listed on the National Register of Historic Places in 1988. Portions of the content on this web page were adapted from a copy of the original Connecticut Historical Commission, Historic Resources Inventory documentation. [1]

The John Rogers House, located at 690 Leetes Island Road [in the Route 146 Historic District], was constructed on a rectangular plan with its ridge parallel to the street. The house has a steeply pitched roof with minimal overhang at the cornice. Small dentil, moldings are featured below the cornice. Its brick center chimney straddles the ridge. It has a nine-window facade and a five-window gable. Windows have twelve-over-twelve sash except the attic window which has six-over-six sash. Its entry door is protected by a gabled hood with an arched ceiling, supported on large curvilinear brackets.

The John Rogers House was recorded on the WPA survey and dated 1810-15 by Elmer D. Keith. However, a well-researched and documented account of the house by David and Ann Clark puts the date of construction between 1750-1760. The house has had a marker on it for many years dating it 1765, but there does not appear to be any evidence to support this date.

The John Rogers House, a well-preserved and researched New England Colonial house, provides a significant architectural record of rural life in this eastern section of Branford in the mid-eighteenth century. It is historically significant for its association with the Rogers family, a family whose history in Branford goes back to the earliest period of settlement. It is a well-documented example in Branford's collection of colonial houses.

W.P.A. Federal Writers Project. "Census of Old or Distinctive Buildings in the State of Connecticut," c.1936, No. 43.

Clark, David and Ann Clark. "The John Rogers House, together with a brief history of the Rogers family in Branford and Stony Creek." Typescript, 1977.