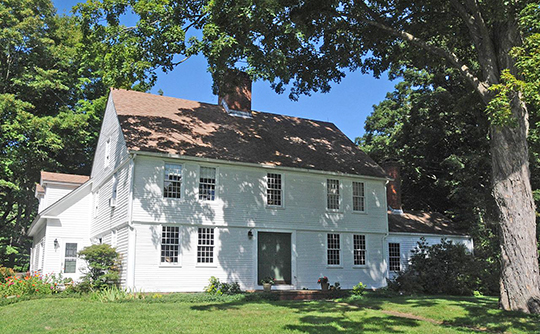 The Highland Historic District [‡] was listed on the National Register of Historic Places in 1982.

Highland is a rural neighborhood located in the extreme northwest corner of Middletown, Connecticut. The houses are spaced well apart along the two tree-lined roads which intersect there, Atkins Street and Country Club Road. Behind many of the houses there are open fields, as well as wooded areas where pastures have become grown over. The land is high at either end of the L-shaped Highland Historic District, but it slopes gradually toward the intersection, where the ground is rather swampy around the edge of Highland Lake. That body of water is largely hidden from the two streets by vegetation and was not included. A smaller pond on the same brook lies just across Atkins Street and was included, as was a breached rubble dam just upstream. There is a small 19th century cemetery with a stone wall and large deciduous trees located just about in the middle of the Highland Historic District, on Atkins Street.

Of the fifteen houses in the Highland Historic District, four are from the 18th century: 2-1/2-story, clapboarded, central chimney structures with the ridges of their gable roofs parallel to the road. Five-, four-, and three-bay facades are represented, but all have their entrance near the center. Four others are from the early 19th century, and unlike their plainer 18th-century neighbors, these have the Classically-inspired ornament of the Federal and Greek Revival styles: molded cornices treated as pediments, pilastered doorways, and semi-elliptical fanlights. Two of the early 19th-century houses have the gable-end-to-the-street orientation which superseded the more traditional placement of the house. Though all of these houses have been altered in one way or another, nearly all have had significant historical material preserved. The more modern houses in the Highland Historic District include a shingled Colonial Revival house from 1915 and six recent ranch, Cape Cod, or Garrison-type houses. Because the modern houses are generally set far back from the street, and because of the topography, which makes the older houses at the intersection and at the higher elevations more visible, the visual effect of the modern residences is less than the proportion alone would suggest.

The boundaries of the Highland Historic District were delineated primarily by visual criteria. The interchange for the interstate highway provides a strong physical and visual barrier at the east end. Modern residential development west on Country Club Road and north on Atkins Street creates a strong contrast to the older houses of the district. Generally, the rear property lines of the house lots were followed to determine the Highland Historic District boundary's distance from the roads, necessarily cutting across large field lots in between. In this way, representative open land was included without excessive acreage. To the east along the lower part of Atkins Street, the edge of Highland Lake (also a property line) was taken as the boundary.

Inventory of structures which contribute to the character of the Highland Historic District:

The National Register Highland Historic District for the Highland area of Middletown includes a number of houses which are good examples of the vernacular architecture of the 18th and early 19th centuries. Indeed, some are considered among the most important old houses in Middletown, according to the recent survey of that town's historic resources cited herein. In addition to their architectural significance, these buildings are important for local history: they are associated with and illustrate something of the lives of the small farmers and craftsmen who were the early residents of the area. Although most of the surrounding region has been developed during recent years, Highland is one neighborhood which still retains much of the atmosphere of an early rural settlement, thereby preserving a chapter in the history of the town's development.

The four 18th-century houses (#'s 1, 2, 6, and 10) typify the rural building pattern of the period: all are clapboarded, gable roofed, central chimney houses. In addition to the usual five-bay facade found in two of the houses, one house has a three-bay facade, a common variant in the East Berlin-Cromwell-Middletown area, and one has a four-bay facade, an arrangement shown in early views of Middletown but quite rare today. The Highland neighborhood thus illustrates both the common 18th-century practice as well as variation from the norm. Three of the houses have the raised-panel wall treatment which is typical of 18th-century interiors. Of these, the Joseph Wilcox House is considered one of the finest and most complete interiors in the town. Its many original features constitute an outstanding historic resource: the panelling, pilasters, cupboards, and grained wainscot illustrate the breadth of early American craftsmanship.

Of the 19th-century houses, the Jedidiah Wilcox House (#7) is one of the few remaining Federal-style houses in Middletown, and its entrance is the most elaborate example of a Federal doorway in the town. The thin pilasters and delicate modillions and swag molding epitomize the Adamesque aesthetic of light, freely adapted Classical ornament, first developed by the Scottish architect, Robert Adam. The finely leaded transom and gable light are also notable in a rural house, where wooden muntins were more common in fanlights. In contrast to the Jedidiah Wilcox House is the Greek Revival house, #9, built about 1835. Although the composition of its doorway pilasters and breaks in a molded cornice is not much different from what might have been built twenty years earlier, the proportions are decidedly bolder: the pilasters are wider, the entablature with its plethora of moldings is much heavier and projects more than would be typical of the earlier period, and the elegant lines of the semi-elliptical arch have been eliminated in favor of the rectilinear lines appropriate to the post-and-lintel emphasis of Greek architecture. Together, the two houses exemplify well the two dominant historical styles of the early 19th century.

Although the other two 19th-century houses are less well-preserved than the foregoing, they nevertheless contribute to the character of the Highland Historic District. The Federal-period house #8 has the gable-end-to-the-road orientation and returned cornice meant to suggest a Classical temple, a form which was introduced in that period and became common in later Greek Revival houses like the adjacent #9. Although #5, a former schoolhouse moved to the site, is considerably altered, its Greek Revival origin is clearly evident in its wide frieze and full cornice return.

Highland was part of Westfield, an area settled in the early 18th century. Like Cromwell, East Berlin, and Middlefield, Westfield was a farming community within the town of Middletown, though some distance from the incorporated City that was a busy port in the 18th century. Eventually, these rural parishes all became separate towns, with the exception of Westfield, which remained part of Middletown. Among the first settlers of Westfield were John Warner, whose house is #6, and the Bacon and Wilcox families, represented by houses 10, 1 and 7.

Almost all the early families were engaged in farming, and the district recalls this lifestyle with its widely spaced houses, open fields and woodlots and its several barns. One of these, the barn with #10 is especially significant. It represents the type of barn common in the 18th century, with its heavy hewn frame, wrought iron strap hinges, and large openings on the broad sides. This arrangement facilitated threshing, which relied on a stiff breeze blowing through the barn, before mechanical threshers were common. Today, when so much of the region has acquired a suburban character, Highland is unusual in retaining much of its rural ambience, created by its old houses, barns and working farms.

The early residents of Highland supplemented their farming by crafts and other activities. Phineas Bacon (#10) was a tanner and a shoemaker, and also kept a tavern. John Warner (#6) also was a shoemaker, and owned an interest in a sawmill and a great number of farming implements as well. Jedidiah Wilcox (#7) hauled goods overland from New Haven to Boston with his teams when the War of 1812 closed off the coastal shipping. Later in the 19th century, Asa Roberts and his son Darius, who lived in the adjacent houses south of the intersection (#8 and 9), carried on a suspender and corset shop on the premises. They also kept bees and were farmers as well. Nineteenth-century maps show two blacksmith shops, a sawmill, and a shop which made tinsmith's tools, all within the bounds of the present Highland Historic District. The two ponds and ruined dam today remain to suggest the small-scale industry which was part of the people's lives in that locale.

Most of these early enterprises were ephemeral, typical of small pre-industrial shops and mills, but the activities of one family, the Wilcoxes, had a larger effect on the industrial history of the state. The Wilcox family is connected with three houses in the Highland Historic District: #1, 2 (bought from the Sage family in 1816) and #7. They owned saw mills, a cider mill, blacksmith shops, and extensive farmland. Like many young men of the area, Horace Wilcox (1824-1890) got started in the tinware business, the center of which for the entire nation was in nearby Berlin. From a beginning as a tinware peddler, Horace Wilcox became interested in the manufacture of tableware, eventually moving to Meriden, where with his brother Dennis he formed the Meriden Britannia Company. Another Wilcox, Jedidiah (not the teamster), started out as a carpet bag and corset maker, but he too turned to tableware in Meriden, forming in 1865 the Wilcox Britannia Company. Although Meriden ultimately became the silverware capital of the country, this important Connecticut industry has its roots in the small-scale crafts of Highland.

The rural atmosphere was one of the things which attracted well-to-do vacationers to Highland at the end of the 19th century. There was at one time a large hotel and later an extensive golf course just opposite the Joseph Wilcox House (#1). Guests arrived on the railroad (later a trolley line) whose abandoned grade can still be discerned near Wilcox Cemetery. They came to enjoy the country air, relax, and drink Higby Mountain spring water, bottled at the Highland Hotel. It was in this period that the area became known as Highland, previously being simply a part of Westfield. Today there are few traces of this phase of Highland's history: the south ell of the Joseph Wilcox House was built to accommodate the hotel's extra guests, and the porch on the Sage House (#2) and the Colonial Revival House (#4) date from this period, indicating that time did not stop in 1835. Although little remains of Highland's resort phase, the same rural nature which drew turn-of-the-century visitors to the place remains largely intact, and makes Highland a valuable setting for the many historic houses of the Highland Historic District.