Photo: Scene from Historic District, location unidentified. The Historic District was listed on the National Register of Historic Places in 1982. Photographed by user:ERoss99 (own work), 2012, [cc-by-3.0 (creativecommons.org/licenses/by/3.0)], via Wikimedia Commons, accessed December, 2013. 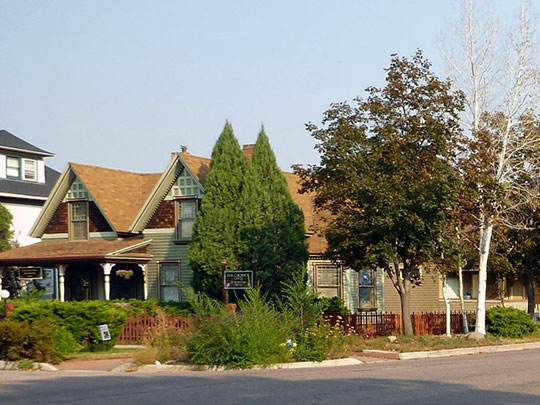 The North Weber Street-Wahsatch Avenue Historic Residential District was listed on the National Register of Historic Places in 1985. Portions of the content on this web page were adapted from a copy of the original nomination document. [‡] .

The North Weber Street-Wahsatch Avenue Historic Residential District is the best intact historic middle-class neighborhood of Colorado Springs. Additionally, the area's design and setting reflect the early planning principles and philosophies which guided the initial development of the community as well as the popular cultural practices of the late nineteenth and early twentieth centuries. The majority of the buildings along North Weber Street, North Wahsatch Avenue and the cross streets of the district were constructed during the turn-of-the-century in response to the population growth created by the Cripple Creek gold boom. As a result, the district contains one of the city's finest collections of Victorian era and early twentieth century residential architecture. Also within the district are many excellent examples of historic boardinghouses, a rapidly disappearing form of housing which proliferated in the late 1800s and early 1900s with the development of the local health industry and tourist trade.

Colorado Springs, Colorado was founded in 1871 by William Jackson Palmer, the Denver & Rio Grande Railroad tycoon. Although the town was to be one of many along his planned north-south railroad line, Palmer envisioned Colorado Springs as a city of refinement for people of means, social standing and high moral character. During the 1870s and 1880s, the clean air, healthy climate and majestic mountain views of the region were extensively promoted in the eastern United States and Europe. As the new community intended to compete with Saratoga and Newport as a luxury resort for the nation's elite, a conscious effort was made to make the form and building in the town similar to those found in Eastern and European cities. To assist Palmer and his town company, the Colorado Springs Company, in creating an attractive settlement, a number of experienced town builders were involved such as Robert Cameron and E.S. Nettleton who helped build Greeley, Colorado. Although the European "Garden City" concept and the City Beautiful Movement had not yet developed in the United States, the initial design of the community contained many elements of these popular planning philosophies.

In the late 1800s, much of the urban design was intended to create open spaces and park-like settings within the crowded, industrialized cities of that period. Even though the circumstances were very different, an effort was made to duplicate the fashionable form of Eastern cities in the plan for Colorado Springs. Consequently the original townsite was laid out on the barren plains along Monument Creek with expansive thoroughfares of varying widths, diagonal avenues and plans for numerous parks. The El Paso Canal and an elaborate system of irrigation ditches were constructed to provide water for the planned vegetation. In the spring of 1872 there were 6,000 cottonwoods planted throughout the city. Palmer hired a landscape gardener from Chicago and appointed a forester to plan and care for the vegetation along the streets and in the parks. An experimental garden was also created to help the new settlers determine the best types of flowers, lawns, and shrubs for their properties.

North Weber Street and North Wahsatch Avenue were laid out as the eastern-most, north-south thoroughfares of the original townsite. In 1873 the Colorado Springs Company extended the streets northward to Columbia Street as part of Addition #1 to Colorado Springs. The design of 100 feet widths for streets and 140 feet widths for avenues was continued, however, as was the practice of naming east-west streets after streams and rivers that distinguished the initial layout of the town.

By the late 1880s, the specialized recruitment practices of the Colorado Springs Company had created a community composed primarily of wealthy capitalists and professionals. The residential development of the North Weber Street and North Wahsatch Avenue began during this period to provide homes for well-to-do families. A good example of the type of building which occurred at this time can be found at 630 North Wahsatch. Although somewhat simple in appearance, this house is a large, two-story structure with elements of the Italianate style including a low-pitched, hipped roof with wide overhanging eaves supported by paired brackets.

The 1891 discovery of gold in the Cripple Creek district brought many changes to Colorado Springs. During the decade following the gold strike, the city's population tripled and diversified socially and economically. With the growth, the residential development of the city proceeded rapidly. The Ensign and Edwards Additions to Colorado Springs which extended Weber Street north to Fontanero Street, is typical of the many small developments which expanded the city's limits during this time. With the community's new-found prosperity, the area around North Weber Street and North Wahsatch Avenue became one of the most desirable neighborhoods for the "comfortable middle-class." Early census data and turn-of-the-century city directories provide evidence of this phenomenon. In the 1900 census, over 60% of the heads of households in the district were employed in business or professional occupations. The 1902 and 1903 Giles City Directories show that many of these businessmen were principals in the mining, investment and railroad companies which developed in response to the Cripple Creek gold boom. Others, like David DeGraff who built 515 North Weber, were involved in the real estate and development industries that provided homes and workplaces for the burgeoning Springs' population. Professionals included several leading physicians, notable judges, attorneys, accountants and engineers. Also numbered among the area's residents at this time were many of the city's prominent merchants such as Cassius Hibbard of Hibbard & Co. Department Store, Fred Crissey of Crissey & Fowler Lumber Company and Lucius Perkins of Perkins & Shearer clothing store, finally, due to the proximity of Colorado College, the area, attracted many professors and other educators and administrators with the college.

As would befit families of the middle and upper income levels, most of the homes constructed along North Weber Street and North Wahsatch Avenue during the turn of the century were substantial. Many were designed by architects. The local firm of Barber & Hastings was one of the most active in the area. Other homes were constructed by well known contractors such as L.S. Atkinson, builder of the historic Steele School. One of the most distinctive homes in the area is 720 North Wahsatch which was constructed by Lewis Whipple, builder of Palmer's mansion, Glen Eyrie. Although this home was moved to its location in 1921 from 21 North Nevada, the avenue directly west of Weber Street, it is representative of the craftsmanship of many of the contractors who worked within the area.

Typical of the Victorian era in which they were constructed, the style of building in the area was extremely diverse. During the turn-of-the-century various building shapes were combined with different architectural elements and ornamentation to create an individualized appearance for each home. Considerable attention was also paid to the setting in which these turn-of-the-century homes were placed. In the late 1800s, large expanses of lawn were popular as it was thought that this provided a "grand" entrance to the dwelling similar to those found on the stately homes of the nation's wealthy. As a consequence, many of the Victorian homes along North Weber Street and Wahsatch Avenue were set back quite a distance from the street to create large front yards. During this time, social activities, particularly for the middle class, were oriented towards the porch and front yard. As a result, this area of the lot was often extensively landscaped. Flowers, shrubbery and shade trees were planted to frame and cool the front porch. In the tradition of English gardens, front yards were enclosed with wood, stone or ornamental iron fences. Colorado Springs was home to Hassell Iron Works, a major producer of decorative iron works in the late 1800s. Consequently, the early residential areas, including North Weber Street and North Wahsatch Avenue, contain many fine examples of this attractive fencing.