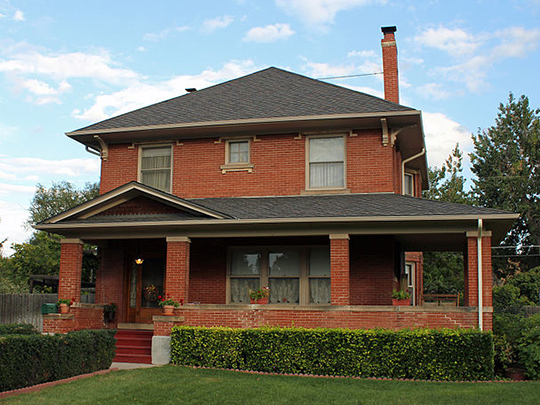 The town of Aurora was settled in the 1870s and '80s primarily through the efforts of "The English Company" — a term loosely applied to a group of English, Scottish and American investors. This group was instrumental in the construction of the Highline Canal which provided irrigation for farms scattered throughout the region.

Agriculture continued as the economic base through the first part of the 20th century and provided the stimulus for growth in the small town. It was not until World War I and the establishment of Fitzsimons Army Medical Center in Aurora that the major emphasis of the economy shifted to that centered around the military presence.

William Smith was very much a part of the settlement and development of Aurora. Born in Aberdeen, Scotland, in 1860, Smith came to America in 1878 under the sponsorship of Lord James W. Barclay. Barclay was head of the banking house of Barclay and Company, a member of the English Parliament, and a director of the Colorado Mortgage and Investment Company of London, Ltd. The Colorado Mortgage and Investment Company was involved in numerous irrigation projects, but is best known for its development of the Highline Canal. James Duff was the local director of the company and its subsidiary, the Platte Land Company which managed land along the canal. Lord Barclay arranged for Smith to work for Duff in Denver for a period of twelve months in exchange for his passage and expenses traveling from New York to Denver.

By 1882 William Smith was able to purchase his own farm land in the vicinity of what is now Sixth Avenue and Peoria Street in Aurora. He built a one-room frame house to which more rooms were added. The yard was a field of cactus bordering the Highline Canal which watered the semi-arid fields to the north. The land south of the canal had to be dry land farmed. Smith raised sheep, alfalfa, barley, corn, wheat, and sugar beets in addition to a small dairy operation.