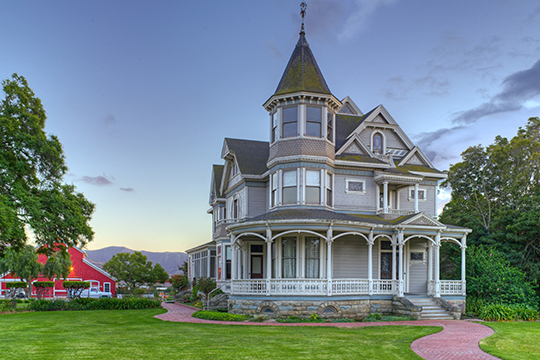 The land on which the City of Santa Paula is located was originally a portion of Rancho Santa Paula y Saticoy, lands granted to Manuel Jimeno Casarin in 1843. The rancho contained some 17,773 acres and was granted to Casarin as reward for his services to the Mexican government as Secretary of State under Governor Micheltorena. He apparently never lived on the rancho and died in Mexico in 1853.

Thomas Wallace More and his brothers, Andrew and Henry, purchased the rancho during the 1850's. More had also acquired the neighboring Rancho Sespe in 1854 from the estate of Josefa Carrillo. The California Agriculture Census indicates that by 1860 More had become the largest single landowner in Santa Barbara County, which at the time included all of contemporary Ventura County. T.W. More raised sheep and cattle on the ranchos until the disastrous droughts of the late 1850's and early 1860's forced the brothers to dissolve their partnership and subdivide the rancho lands.

George G. Briggs purchased approximately 15,000 acres of Rancho Santa Paula y Saticoy from More in 1861. Earlier that year Briggs, together with his nephew Jefferson Crane, had visited T.W. More at his adobe residence. All three men had known each other in Ohio where they had lived previously. After purchasing the land from More, Briggs used the two-story adobe built for More by W.D. Hobson as the center of his ranching operations. Briggs, formerly a horticulturist in Marysville, believed he could successfully raise fruit on the land, and planted a 160 acre orchard near the adobe. Discouraged by the continuing drought conditions, and disheartened by the death of his wife, Briggs in 1867 authorized land agent E. B. Higgins to begin subdividing the rancho into 150 acre parcels. These parcels were sold primarily to farmers emigrating from the Northern California gold fields, and the East and Midwest.

In 1872 Nathan Weston Blanchard and his silent partner E.L. Bradley purchased 2,700 acres of Rancho Santa Paula y Saticoy from Higgins, and three years later recorded the townsite of Santa Paula on a portion of it. Blanchard, generally considered the founder of Santa Paula, was born in Madison, Maine in 1831. He arrived in northern California in 1854, during the Gold Rush. He gained financial success in the meat butchering business and the lumber trade in Dutch Flat, a Sierra Nevada gold mining boom-town. He married Ann Elizabeth Hobbs in 1864. Following the death of their first child Dean, they moved to Ventura County in 1872. The Santa Paula townsite, surveyed in 1873 and recorded by Blanchard and Bradley in 1875, was bounded on the north by Santa Paula Street, on the south by Ventura Street, on the east by Twelfth Street and on the west by Mill Street. Blanchard planted seedling orange trees in 1874, and during the late 1880's, constructed the first packing house, located adjacent to the railroad.

In addition to the development of agriculture, oil exploration was occurring in portions of the Santa Clara Valley as early as the 1860's. Some of the first oil explorations in the Santa Paula area occurred in Adams Canyon, where tunnels were drilled horizontally into the hillsides. Sulphur Mountain was also cited in early geology reports as being one of the major oil prospecting regions in California. Thomas Bard, representing Thomas Scott of the Pennsylvania Railroad, arrived in Ventura in 1867 with the intent of purchasing land for this purpose.

Santa Paula had by the early 1880's become the base of operations for Pennsylvania oil developers Wallace L. Hardison and Lyman Stewart. They established the Hardison and Stewart Oil Company offices on Mupu (Main) Street in 1886. In 1890 several small oil companies owned by Hardison, Stewart and Bard joined forces to become the Union Oil Company.

Despite these pioneering efforts, the growth of Santa Paula's agriculture and oil industries was restrained by transportation considerations, until the Southern Pacific railroad arrived in the Santa Clara Valley in 1887. Soon afterwards, citrus cooperatives were established to provide the ranchers with efficient methods of shipping and marketing. Agriculture as an industry (as differentiated from traditional family farming) began in 1893, with the founding of the Limoneira Company west of Santa Paula, and the Teague-McKevett Ranch east of the city. Both companies built their own packing houses and warehouses adjacent to the railroad. By 1890 several other large subdivisions had been added to the original 1875 townsite: the McKevett Tract in 1885, the Orcutt-Moore Tract in 1892, the Hardison-Irwin Tract in 1887 and the Barkla Tract in 1888.

Rapid growth of the community followed the establishment of viable oil and agriculture industries, culminating in the incorporation of the city in 1902. The first two decades of the twentieth century were marked by both the maturation of the citrus industry and the opening of the highly productive South Mountain Oil Fields. The growing profitability of these industries produced Santa Paula's third building wave, the expansive era of the 1920's. Numerous new schools, banks, offices and commercial buildings were built or remodeled. The development of new residential tracts for both the affluent and the working class rapidly transformed Santa Paula's previously rough appearance to one of modernity and respectability. The Great Depression of the 1930's curtailed economic growth nationwide, resulting in substantially reduced levels of development in Santa Paula. Even during the depths of the Depression, however; the region's robust agricultural industries allowed it to remain a magnet for large numbers of immigrants escaping the "dustbowls" of the Southern Midwest. Despite the relative strength of the local economy, the Santa Paula Airport was one of the few new developments produced during the 1930's. A gradual economic recovery taking place during the late 1930s was cut short by World War II, but was soon followed by a new surge of residential development, particularly during the 1950's and 1960's. During this period the Blanchard orchards west of Palm Avenue were turned over to residential development. The construction of the Santa Paula Freeway during the early 1960's linked the city to the west county, bringing its relative isolation to an end.