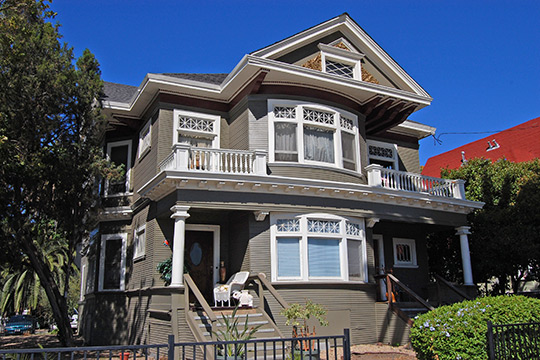 The Hensley Historic District was adopted as a local Historical Landmark District in 1990 by the San Jose City Council. It was listed on the National Register of Historic Places in 1983. The district contains over 225 buildings that contribute to its historic character, representing the largest concentration of Victorian era residences in greater San Jose. The boundaries of the designated district are generally North Second, East Empire, North Sixth, and East Julian Streets, with some residences on both sides of these perimeter streets included. The district also contains a number of other non-contributing buildings, which generally were constructed after World War I. They are considered non-contributing because they do not add to the sense of time and place of early San Jose, or have been so altered that the integrity of these structures to their original design has been lost. The period of significance for the establishment of the historic district is 1865-1918.

The namesakes of the district, Major Samuel J. and Mary Helen Hensley, were early San Jose residents of the American period, whose lives are interwoven with the origins of modern California. They established residency in 1853 on the east side of North First Street in the vicinity of present-day Ryland Mews, living in a two-story prefabricated house that Mary Helen's father, Elisha O. Crosby, had brought from the East Coast in 1851. Elisha came to California in 1848 during the Gold Rush, and was a member of the state constitutional convention in Monterey in 1849. He was instrumental in making California's first election a success. Crosby lived briefly in San Jose, and as an early State Senator authored California's common law statutes. Mary Helen met Samuel Hensley in 1850 when the California delegation had come East to lobby Congress for statehood, and her journey in 1850 to California via Panama marked the entry of California to the Union, for she carried the admission documents in her blue silk umbrella. This umbrella is now on display at the State Capitol in Sacramento as an artifact of an important event from our past.

The present Hensley Historic District contains the larger neighborhood around the Hensley estate, and developed slowly following California statehood. The original San Jose survey by Chester Lyman extended only to Julian Street. Although the gridiron of the city's topology was expanded northward to Rosa Street by 1850, this area, known as White's Addition, remained rural until the late 1860s.