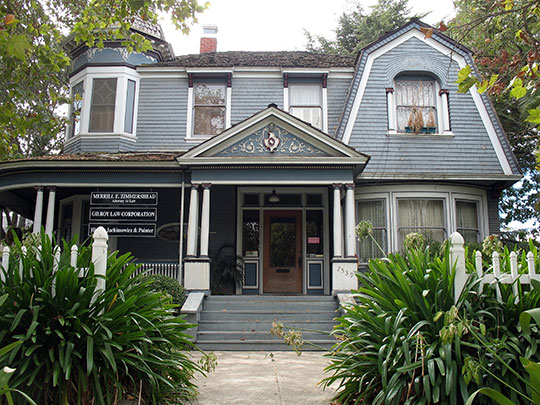 The earliest recorded inhabitants of the Gilroy area were the Ohlone Indians, who occupied the area between 3000 and 1000 years ago and lived as hunters and gatherers until the arrival of the Spanish in the 1700s. In 1768, the Spanish began exploration of the area. They established Mission San Juan Bautista in 1797, and colonization of the area soon followed. Two Spanish land grants, the Las Animas and the San Ysidro, and many Mexican grants divided the area into large ranchos that raised cattle for hide and tallow.

Gilroy's namesake—John Gilroy—arrived in Monterey from Scotland in 1814, and was baptized in Carmel in 1817 under the name of Juan Bautista Gilroy. He made his way to Rancho San Ysidro, where he was employed by Ygnacio Ortega and, in 1821, married his employer's daughter, Clara Ortega. The Gilroys had 17 children, 9 of whom survived.

The first American settlers were the Martin family, who arrived in 1843 in the first California-bound wagon train. Following the gold rush years, pioneers flooded the fertile Gilroy area with farms of every size and description. Americans, English, Irish and German settlers joined the Spanish and Mexican pioneers in stock raising and grain farming, and the area, growing from the small settlement of San Ysidro into the village of Pleasant Valley, became known as the Hay and Grain Capital of California.

The town of Gilroy got its start in 1850 as a stage stop along the San Jose to Monterey Road. By the time it was incorporated by the State as a charter city in 1870, it was the third largest community in Santa Clara County, with a brewery, a flouring mill, and a distillery. The railroad arrived in Gilroy in 1869 and made the community the hub of south Santa Clara Valley.

In its first hundred years, Gilroy's economy was dominated by agriculture and agricultural processing, with its primary crops changing over the years in response to changing markets as well as the introduction of new crops and new growing techniques by waves of new immigrants. Agricultural industries—canneries as well as dehydrators, dryers and packers, breeding, and the seed industry—have long been the backbone of Gilroy's industry, and continue to play an important role, with Gilroy Foods and Christopher Ranch remaining the City's two largest private employers.

Following its beginnings as the Hay and Grain Capital of California, Gilroy earned a reputation as the Tobacco Capital of the United States, producing more tobacco leaf than any other place in the US in the 1870s. It also had the world's largest cigar factory, which produced over 1 million cigars each month. Following the collapse of the tobacco industry due to depression and the outlawing of Chinese labor in California, Swiss and other middle-Europeans arrived in the 1880s and began dairying and cheese making. When Gilroy began producing four-fifths of California's cheese, the town began to be known as the Dairy and Cheese Capital of California.

In the 1880s, Italians and other southern Europeans also began arriving, bringing with them orchard crops such as apples, apricots, cherries, peaches, pears, plums, and nuts, as well as row crops such as tomatoes, peppers, onions, and garlic. Orchard crops flourished well into the 1950s, when Gilroy was known as the Prune Capital of California. Garlic production for the commercial market only started after the arrival of Japanese farmers in 1918. By 1940, the largest grower of garlic in the US was Kiyoshi Hirasaki of Gilroy. Today, the Gilroy Garlic Festival, started in 1978, celebrates Gilroy's role as the Garlic Capital of the World. The festival attracts over 130,000 people to Gilroy each year, and has given more than $2 million back to the community.

Gilroy's city limits remained unchanged for the first 80 years of the City's history, defined by a 1.5 mile rectangle of land known as the "old quad" and its grid system of streets laid out in 1867 by a local physician, Dr. David Huber.

In 1948, the City underwent its first annexation. California grew rapidly in the post-war years, and Silicon Valley and other employment centers began to flourish in north Santa Clara County in the late 1950s. With the completion of US Highway 101 in the early 1970s, the City of Gilroy became more accessible and its growth rates went up sharply. While agricultural sector growth began to slow down, manufacturing, retail, and service sectors began to grow at a faster rate.