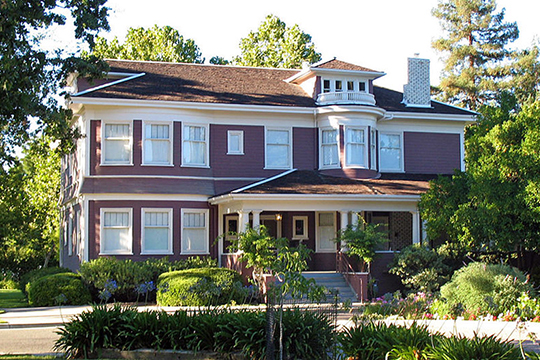 In 1849, William Slusher built a roofed cabin on the banks of what was then called "Nuts Creek" near what today is downtown Walnut Creek. He and his family became the first American settlers in what became known simply as "The Corners" — so named because it was the crossing of the two dirt roads leading from Pacheco to the north and Oakland to the west. Milo Hough of Lafayette came to The Corners in 1855 and built a hotel and store called the Walnut Creek House, at the present day intersection of S. Main Street and Botelho Drive. It is believed that Walnut Creek got its name from The Walnut Creek House.

Hiram Penniman, whose 1903 ranch house in Ygnacio Valley serves today as the Shadelands Ranch Historical Museum, laid out the town site of The Corners in 1856. He was also responsible for realigning the north-south road away from the creek, creating Main Street in the process. In 1862, a U.S. Post Office was established in the village, which was then named Walnut Creek. Homer Stow Shuey arrived in 1869, buying 57 acres in an area near the junction of N. Main St. and Mt. Diablo Blvd. He was the first to file a subdivision map in 1871 and began selling off lots.

By 1914, the population of Walnut Creek had grown to 500, and it was incorporated as a City, primarily as a way to raise the funds needed to finally pave Main Street.

Since the 1920s, Walnut Creek has grown and changed. Most of the structures that were built within the original city limits have been demolished and replaced, some several times over. In spite of this, Walnut Creek retains a number of historic and potentially historic buildings, both commercial and residential.