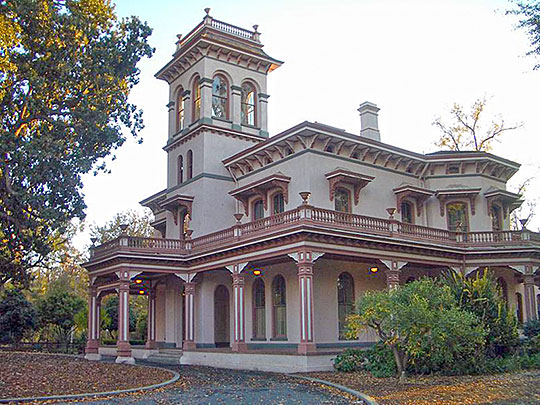 Chico's setting lies in the agricultural flatlands of the Sacramento Valley with proximity to the waterways of the Sacramento River and to the eastern foothills of the Sierra Nevada, a major route to the Nevada and Idaho mines. The city's site was recognized for its excellent settlement potential as early as the 1840s. John Bidwell, explorer and aide to General John Sutter, had mapped the area around Chico Creek in 1843 creating the map which the Mexican governor, Micheltorena, used as a basis for the local land grants. The origins of the City of Chico can be traced to two 1844 Mexican land grants made by Micheltorena to Edward Farwell and William Dickey. Each grant comprised more than 22,000 acres. Taken together, they reached from the east bank of the Sacramento River into the Sierra Nevada foothills.

John Bidwell bought Dickey's grant in 1849 and built his first residence, a wooden structure, destroyed by fire 3 years later. He then erected a 2 story adobe. With the establishment of the first flour grist mill in northern California in 1853 opposite his adobe residence, farm buildings, and general store, Bidwell marked a change to the area's agricultural emphasis on grain crops, having previously been predominantly concentrated on cattle raising.

In 1860 Bidwell commissioned County Surveyor J. S. Henning to create a plan for a townsite of 50 blocks laid out between Big and Little Chico Creeks. Henning centered the town grid on Shasta-Tahama Road, the stage route to northern California. The present social and economic center of Chico remains the town core that Henning and Bidwell designated.

John and Annie E. Kennedy Bidwell, with Henning's technical help, molded their town in a way that few professional planners could equal. Bidwell's wide streets, now tree-lined, give a feeling of spaciousness and flexibility to what is actually a relatively small community. The order and regularity of the plan evidence Bidwell's gifts of land to local churches, schools and the city, helped establish the present look and atmosphere of Chico. He gave each denomination a block within the city on which to build a church. By 1870 there were seven established churches, most of them centered around the downtown area. Only one congregation has remained on its original block — the Catholic parish of St. John the Baptist. One early church, the African Methodist Episcopal Church, built in 1867 for another faith, has been in continual use despite several moves since that date.

Bidwell gave land to schools. Woodman's Academy, established on block 81 and sold for $1 in 1862, was Chico's most prominent and long-lasting 19th century private school. The Salem Street School, built in 1866, was Chico's first permanent public schoolhouse, serving for 100 years until the school-age population had moved from the "Old Chico" area to the newer residential areas on the far east and north sides. The Oakdale School building was erected on the south bank of Little Chico Creek, which was not Bidwell land. This school functioned from 1874 to the late 1940s. The site is now used for a continuation school.

The California and Oregon Railroad arrived in 1870, providing access to the rest of the State and country. With Chico's incorporation as a city, a gable-roofed, frame town hall was built. The Chapman Addition in 1871 and the Oakdale subdivision later in the 1880s, opened to settlement the area south of Little Chico Creek on either side of the Shasta-Tehama Road, now known as Park Avenue. The Eastern Addition moved the eastern boundary of the city one block east to Olive Street, where it remained until 1906.

In an effort to secure the county seat for Chico in 1874, Bidwell made his first gift of a park to the city. This was the present City Plaza, which he had intended to be the site of a country courthouse. Although Chico failed in its efforts to become the county seat, the tree-filled Plaza has remained the center of downtown Chico. It is anchored on one corner by the 1911 Municipal Building on another by the 1916 Old Post Office.

The principal industry of the area in the 1870s was lumber. In 1874, a flume for rough-cut lumber was built from the Butte Meadows to Chico. Sierra Flume and Lumber Company was established the following year. The availability of architectural millwork for residences became apparent in structures from the late 1870s. By 1883, a building such as the Stick-Eastlake style Earll House could be completely milled in Chico. Wooden commercial structures still tended to be utilitarian and most were false-fronted, eventually burning or being replaced with brick buildings. The 19th century interior walls of these structures still exist in most of the downtown area.