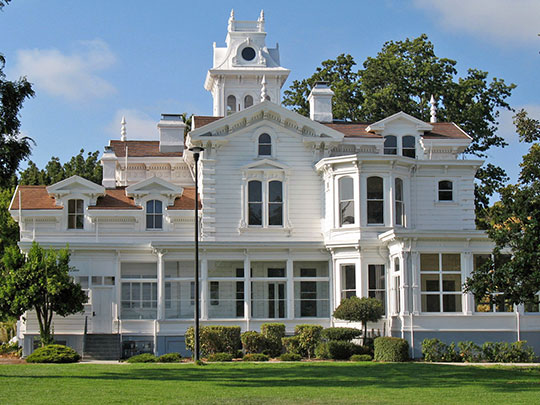 Hayward was established in 1854 when Guillermo Castro subdivided his ranch and commissioned a survey for a town of 28 blocks. Castro sold a large tract of land to William Hayward, who built a general store and lodging house at present-day "A" Street and Main Street. A small town supported by agriculture, salt production, and weekend tourism slowly grew around Hayward's store and lodging house. By 1870, Hayward had a thriving commercial district and a population of about 1,000. Hayward was incorporated in 1876 and remained a small agricultural town for several decades.

When the United States entered World War II in 1941, Hayward was still a small agricultural town with a population of about 7,000. The post-World War II housing boom brought drastic change and growth to Hayward. Vast tracts of agricultural land were annexed and developed with low-density housing tracts, suburban shopping centers, and industrial parks. A variety of Federal laws, such as the Federal Housing Act and the Veterans Administration loan program, fueled the demand for housing by helping families buy homes through government assisted mortgages. By 1960, the City was completely transformed into a suburban bedroom community with over 72,000 people and city limits that reached the San Francisco Bay.

In the 1990s and 2000s, the City of Hayward began a new era of land use planning and urban design based on the principles of "smart growth." The preservation of open space, infill development and revitalization, compact and mixed-use neighborhoods, pedestrian and bicycle-friendly streets, and transit-oriented developments are key principles of smart growth that the City of Hayward embraced and applied to planning and revitalization efforts for the Downtown, the Cannery Neighborhood, the South Hayward Bart Station Neighborhood, and the Mission Boulevard Corridor.