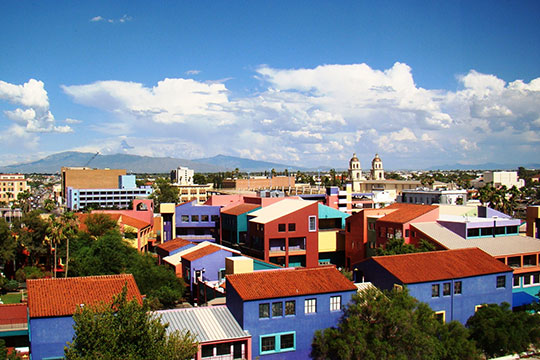 The El Presidio Historic District [†] was listed on the National Register of Historic Places in 1976.

El Presidio is one of the nation's oldest inhabited sites. The Historic District of El Presidio is composed of about 90 buildings of architectural and historical significance. Combined, these-buildings exhibit and celebrate Tucson's development from an eighteenth-century walled Presidio through the Territorial years during which it spilled over the Presidio walls, to the late nineteenth century when the Anglo-American incursion and the coming of the railroad changed the village to a major mercantile center of the Territory.

Alameda, and not surprisingly the first adobes independent of the Presidio were built outside the gate. The compound enclosed more than ten acres, covering at least five more acres than most such encampments, emphasizing its importance. By 1820 almost 400 people lived in the confinement of the Presidio, repeatedly defending themselves against the Apaches' attacks. Hilario Gallego, born inside the Presidio in 1850, recalled (in a 1926 interview on file at the Arizona Historical Society) that "there was a connecting chain of single-story adobes built alongside the interior wall. The houses had doorways, but few had window openings. Some of the doors were made of brush and saguaro sticks tied together with twigs or rawhide. Even the riches and power of Spain had been strained in reaching northward to the presidios and missions of Sonora, and with the Mexican Independence from Spain in 1821, funding and interest nearly ceased.

Little by little, Mexicans filtered out of the Presidio to build houses nearby with bricks from the fortress wall. And so the wall began to disappear. After the Gadsden Purchase of 1854, adventurers came on their way to or from the California gold fields, some simply happened by and stayed to settle in the sleepy but contented village. Later, New Englanders, Pennsylvanians and New Yorkers—Irish, Germans, Christians and Jews recognized the prospects of the village situated alongside the lush Santa Cruz River banks, on the southern route to California. Judge Frank H. Hereford arrived in Tucson in 1878, at sixteen years of age, and later described "a town of low, unplastered adobe rooms, built together, facing, and placed directly upon the lines of irregular, narrow and ungraded streets, except where towards the outskirts, the box-shaped rooms separated into individual houses and finally scattered into isolation ... burros brought firewood and water from wells on the edge of town was carried in ollas."