Photo: Homes in the MacArthur Park Historic District, Little Rock, AR. The Historic District was listed on the National Register of Historic Places in 1977. Photographed by User:Valis55 (own work), 2015, [cc-by-3.0 (creativecommons.org/licenses/by/3.0)], via Wikimedia Commons, accessed October, 2015. 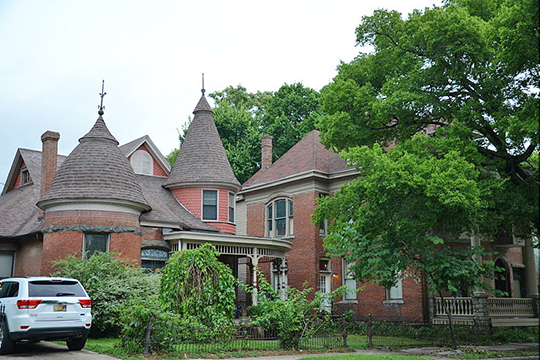 The MacArthur Park Historic District [1] was listed on the National Register of Historic Places in 1977.

Early settlement in Little Rock took place along the Arkansas River, giving the town an east-west orientation. By 1840, Little Rock had grown to 1,531 residents and was expanding south from the river into the area included within the boundaries of the current MacArthur Park Historic District. In 1836, the federal government bought 36 acres of land for a United States military post, showing a commitment to protect the frontier community. The first building of the U. S. Arsenal at Little Rock (503 E. Ninth), red brick Federal style, was ready to store munitions by 1840, with other structures following. (This sole remaining building of the Arsenal is now called either the Arsenal Building or the Tower Building.) The buildings served the Confederacy for several years during the Civil War.

Several Greek Revival homes ("mansions" at the time) were constructed in the area in the 1840's and still remain. The Absalom Fowler House (503 E. Sixth) was built by a successful lawyer and land speculator. The Pike-Fletcher-Terry House (411 E. Seventh), constructed in 1840, has housed two of Arkansas's most distinguished persons: Albert Pike, lawyer, poet and Masonic philosopher; and later, John Gould Fletcher, the only Arkansan who has won a Pulitzer Prize for literature. This house also has links with African-American history. Slaves probably constructed it. In the late 1950's, Adolphine Fletcher Terry and the Women's Emergency Committee met in the house to develop ways to counter the integration crisis at Central High School. Curran Hall (615 E. Capitol Avenue) and Trapnall Hall (423 E. Capitol Avenue) were both built about 1843. Four smaller Greek Revival homes were built before the war. Each of these was an urban farmstead, with the house accompanied by a variety of outbuildings and landscape features, both ornamental and utilitarian. The MacArthur Park Historic District has one of the largest concentrations of pre-Civil War buildings remaining in the state. Also created in 1843 was Mount Holly Cemetery (1200 Broadway), which has an impressive variety of monuments at the grave sites of many notable Arkansans.

The grand Italianate homes of MacArthur Park were the first of many brick houses built from 1870-1890. The brick Lincoln House (310 E. Seventh), built in 1877 for wholesale druggist Charles Lincoln, perfectly retains its decorative exterior ornament, making it a local showplace. The Garland-Mitchell House (1404 Scott), built in 1873, an excellent wood example of Italianate style, was the home of two governors of Arkansas, Augustus Garland and Charles Brough. A simpler cottage, the Cook House (605 East Sixth), was inhabited by the town's first full-time undertaker, reflecting the growing needs of Little Rock as it evolved into a city. At least nineteen fine examples of Italianate architecture remain in the districts, recalling the post-war boom.